Should You Pull? Guzma & Buzzwole 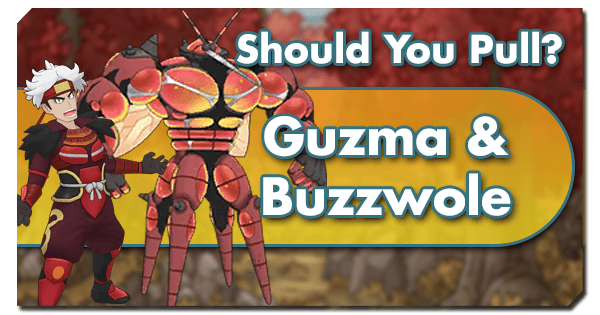 The hated boss who beats you down and beats you down and never lets up! Guzma is here, and he’s got a bone to pick with everyone! Think you’re a bigshot with your funny lookin’ duck or your blue pony? Nah, check out the guns on Guzma’s very own Ultra Beast, Buzzwole! He’ll show you what a Fighting Type really is, as he cuts loose and destroys everything! Big Bad Guzma is here!

So how do we start this? Yeah, you know it; by breaking down the master of disaster. But, gotta be honest here; their stats aren’t great. Okay attack, low bulk, and pretty low speed, but hey! It’s not about the stats, but what ‘ya do with ‘em! Buzzwole likes to punch things, so it’s got Dynamic Punch up-front to start this gun show. It’s 4-bars, hits like a truck, and confuses whoever gets hit by it, because how would ‘ya not be confused after gettin’ hit that friggin’ hard? It’s only got 50% accuracy though, and trust me; Buzzwole gets ticked when it misses! Next up is Hammer Arm; a solid, 3-bar punch that drops Buzzwole’s speed whenever it uses it. It’s a bit of a pain, but at least it still hits hard and doesn’t have bad accuracy like Dynamic Punch. With attacks outta the way and since Guzma likes to bring the pain too, now we’ve got Trainer Moves. X-Sure Hit makes sure that the next attack hits, and Show No Mercy! is a huge friggin’ trainer move that gives +3 Critical Rate and +6 Attack in one use. It drops Defense and Special Defense too, but who cares when all it takes is one good hit to knock out the other guy!

Now let’s look at the really fun stuff; the passive skills. Victory Charge 2 gives the team 2 Move Gauge bars any time that Buzzwole manages to punch something into a coma, which is nice and all, but not the best part. Super Syncer gives the Super Effective Next Up damage buff after Guzma & Buzzwole score a Sync Move, which is great, but still not the best part. Now, ready for the real best part? Tenacity 3 kicks in if Buzzwole misses a punch, and boosts the damage of the next physical move that it uses by 3 ranks. So what the heck is that supposed to mean? Well, let’s put it this way: 1 rank is 40% damage, so after 1 miss ‘ya get a free 120% damage boost on your next attack. Oh, but it gets better! This stuff can stack up to ten times, so even missing twice in a row is fine, because Buzzwole is gunna’ hit back like a train after! 1 miss is 220% damage, 2 misses is 340% damage, 3 misses is 460% damage, and 5 is a full 480% damage. And this can actually build up even faster with a bit of grid-help. That’s right; Guzma & Buzzwole actually take the low accuracy of Dynamic Punch and turn it into a friggin’ game of “2 for flinching”!

So what do Guzma & Buzzwole do right? They show you to the pearly gates. Seriously; a Super Effective/boosted punch from Buzzwole is one of the hardest non-Sync hits that you can take in the game, and it will leave a mark. They’re ready to cut loose and destroy everything in one use of their trainer move too, so that’s pretty dang nice! Really, punching stuff is the whole goal here, and Buzzwole & Guzma are good at that! But hey, let’s be real for a second; we’ve got a few problems to look at here too. First up; Guzma & Buzzwole are strong as heck, but not that reliable. If everything goes great, then Dynamic Punch will miss once or twice before hitting so that it can stack up those boosts for one huge smack. But some of the time it will just keep hitting over and over, and others it will miss too many times in a row, and you’ll lose damage. This isn’t super bad most of the time, but in battles where you need a big punch to land to stop a Sync Move or put down an enemy before they can put you down, best ‘ya can do is hold your breath and pray. This setup can also lead to some serious wasted time. Imagine you’ve got an enemy down to low enough HP to take out with a normal Dynamic Punch. You could make the punch, but if it misses then you’re taking 2 or more turns to do what should only take 1. And if you switch to Hammer Arm, then you’re just asking for gauge problems moving forward. This is why Guzma & Buzzwole aren’t super-reliable.  X Sure Hit helps out, but then you’ve got to miss a punch or two, use X-Sure Hit, and then score the next punch, which is pretty awkward and slow. We’ve also got the problem of just how much Tenacity adds to the power of a punch. Yeah, 120% on the next hit after a miss is nice and all, but it’s not a huge buff over what two hits would have done. Really, they need their grid to add one more level to that to really shine here. but  So yeah; Guzma & Buzzwole really need to rely on luck or have some partners that can give them Sure Hit, because they do not want Accuracy buffs! Then we’ve got the fact that they’re friggin’ slow! Seriously; you’d better bring some Move Gauge or Speed support to the fight, because they are not gunna’ help on that front!  Oh, and another thing: Guzma & Buzzwole really can’t take a hit. They’re really glassy and drop their own defenses with Guzma’s trainer move, so one really good Sync Move could make them fold.

Guzma & Buzzwole are a gamble. If the moves land and miss like they want, then they can clear stages supid fast. But keeping up that luck can be a problem, and their glass-cannon build means they really want to take down the center early to keep Sync Moves off the field, but also really want to take the sides early so that they don’t have to take AoE moves. It’s going to take some good team building and luck to make them work, but holy crap those big numbers are fun.

One target, two fists, no problems. Like before, they’re at risk here due to the need to roll the dice, and their lack of effects that can gimmick-break doesn’t make them particularly appealing, but they can definitely be called on to punch their way through a boss or two. X-Sure Hit can be a bit more useful here, because evasion-stacking bosses are a thing.

These stages tend to be pretty harsh, so Guzma & Buzzwole’s risky strategy can lead to disaster. Of course, it can also lead to hilarious Jojo-style punches, so just be ready to reset a few times before achieving glorious victory.

The ability to max Attack and Critical Rate with one move use on a skill that has an MP Refresh on their grid means that Guzma & Buzzwole can come in and wreck basically every stage if you don’t mind resetting on MP Refresh failure and playing around misses, but their low bulk also makes them a KO-risk for powerful AoE attacks or Sync Moves. They’re risky here.

These are generally the most important tiles on Guzma & Buzzwole’s grid:

First up: avoid accuracy buffers like the plague. Capiche? Good. Sure Hit support can be a real lifesaver for Guzma & Buzzwole, though Maylene & Medicham are the only ones currently capable of doing this. They’re not the best in general, but they fill a valuable niche here, and also have the Fighting Type theme skill for added damage. Speed and Move Gauge support are a huge help, so Sync Pairs like Skyla & Swanna, Masked Royal & Incineroar, or Kiawe & Marowak are great partners here. If overcoming speed is doable, then a dual-striker team with the likes of Bea & Sirfetch’d or Diantha & Keldeo becomes viable, with the latter able to switch to Aura Sphere when the gauge is low and score Defense drops. Red & Snorlax are also viable for giving Dynamic Punch one final push towards glory with Super Effective Up Next effect, though Speed will really be an option with these two paired together. One nice fact to remember is that Guzma & Buzzwole can fully set up their Attack and Critical Rate in one move use, so they are pretty adaptable in general, and really don’t need a whole lot of support to go all-in. In general, just make sure that their move gauge is manageable and they’re good to go.

Guzma & Buzzwole are known for one thing: scoring one single, mammoth hit. But keep in mind that these single hits are actually derived from a few turns of random setup, so while they are very impressive, they’re not as broken as they appear to be on the surface. It’s probably best to weigh the pros and cons of Guzma & Buzzwole against Diantha & Keldeo, as they are the currently running competition with exceptional consistency and safer moves as their main benefit, and it’s also worth considering if either is worth the investment given the fact that Bea & Sirfetch’d are already in the main pool, and they are genuinely very solid in the same type. If all of these considerations check out, then Guzma & Buzzwole will definitely not let you down! ...most of the time.