Should You Pull? Hilda & (Mega) Diancie 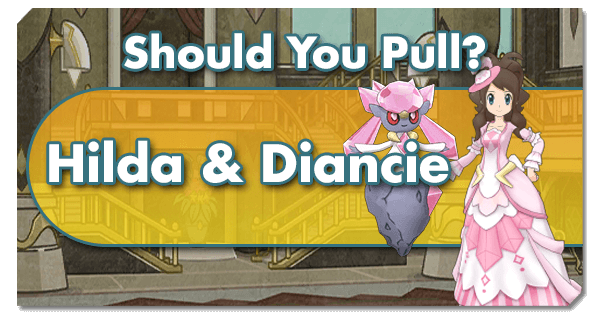 A Rock Type Striker with enough power to chip out a niche in an already crowded type, and enough flexibility to be useful on a number of teams.

Mythical Pokemon are always a bit of a big deal in Pokemon Masters. What started with Professor Oak & Mew has now reached the Unova Region and beyond, as Hilda steps up with her own Mythic: Diancie of the Kalos Region. Sporting a dress that matches this sparkling Pokemon, these two are ready to put on a shining show and bury the world in a crystal avalanche.

Let’s start with a quick review of Hilda & Diancie’s stats and moves. Their Attack is pretty high post-Mega, and their Speed is genuinely nice. Their bulk is nothing worth writing home about, and their Special Attack is entirely worthless in this case due to a total lack of Special Moves. Attack-wise they have Stone Edge, which is nothing new, and Diamond Storm, which is a fairly strong, four-bar AoE move that has a 50% chance to raise Diancie’s Defense by 2 stages with each use at its base, but only 95% accuracy. Their Trainer Moves are X-Attack, which is a basic +2 Attack at 2 uses, and Shine On!, Which gives +2 Speed, +2 Accuracy, and +3 Critical Rate at one use per battle. Their Sync Move is nothing special as is normally the case with a Mega Evolution Sync move, but we’ll cover how they make up for that a little later.

Finally, passive skills are the last major facet to look into with this gem-encrusted Sync Pair. It’s here that we have Tough Cookie to provide buffs to damage as Diancie’s Defense rises, Swag Bag 1 to boost the odds of Defense buffs with every use of Diamond Storm to a full 100% per use, and Head Start 1 to lower the Sync Move counter by 1 at the start of the battle. This last skill is then replaced with Fuel Economy 1 on Mega Evolution, and… oh boy, this is a nice skill. What it does is drop the Move Gauge requirement of all attacks by one bar without reducing damage, so Diamond Storm now takes three bars instead of four, while Stone Edge takes a mere 2. This makes Mega Diancie very gauge-friendly given its high power!

We have a fair number of really good Rock Type attackers in the game right now, but Hilda & Diancie set themselves apart with a few unique tricks. To begin with; they’re offensively a bit of a cross between Blue & Aerodactyl and Emmet & Archeops, as they’re versatile while not weather-bound, but also very capable of huge AoE Rock Type damage. They’re also the bulkiest of the three major Rock Type attackers by a fair margin, adding to their ease of use. And speaking of ease of use, they’re arguably the easiest of the three to use post-Mega thanks to Fuel Economy 1. But, as is always the case, it’s not all sunshine and gemstones for Hilda & Diancie. The fact that they play into the Rock Type Striker role means that they may not offer a huge return on investment for players who already have Emmet and/or Blue. They also have the annoying need for some outside help or MP Refresh luck with Attack buffs if they want to hit the coveted +6. Overall, the down-sides aren’t terrible, and Hilda & Diancie are genuinely great for the most part.

Diamond Storm’s AoE power combined with AoE Sync Moves when Hilda & Diancie are EXed can devastate the opposing team and make the sides downright trivial to deal with. And since their damage is in the top echelon of Rock Type attackers, the center won’t be far behind once the sides fall.

While reliable for Rock Type damage, Hilda & Diancie aren’t outstanding here as they lack a primary offensive gimmick aside from AoE Rock Type damage. They’re probably best relegated to the position of second attacker on the majority of stages.

The ability to leverage high AoE damage can be very useful here, as the sides tend to have nasty effects that they like to spread around via Go Viral or Ripple Effect.

Reliance on Physical attack and an inability to passively buff anything aside from Defense is a hindrance here, as it leaves Hilda & Diancie unable to take full advantage of the kindness of Professor Sycamore & Xerneas. On top of that, the need to Mega will slow things down considerably, as Sync Moves are generally used for resources early-stage. They can work here, but they’re going to be slow getting to solid numbers.

These are generally the most important tiles on Hilda & Diancie’s grid:

So what exactly do Diancie & Hilda need in order to thrive? Well, a bit of Attack support is nice so that they don’t need to waste time fishing for MP refreshes, Speed support is helpful for Diamond Storm’s Ramming Speed tile, and a bit of Defense can be helpful for reaching maximum damage a bit earlier, though this is less important as Diamond Storm will eventually do the job. Hilbert & Samurott, Caitlin & Sableye, Bugsy & Scyther, Hop & Zamazenta, Kiawe & Alolan Marowak, and many other Support units can fill the main roles here perfectly. Seriously: we went from having a serious lack of Physical support units to having a glut of them; it’s not hard to fill in the gaps here.

Meanwhile, Hilda & Diancie’s low move gauge cost and high speed allow for ease of use on dual-Striker teams. They pair very well with Emmet & Archeops or Blue & Aerodactyl to add some non-prehistoric Rock Type damage to the team. Sync pairs that can break down team Defense like Kukui & Lycanroc are also great, as they can quickly soften up the enemy’s defenses in order to make way for potentially devastating AoE Diamond Storms.

Hilda & Diancie come into an existing role in the game as a Rock Type Striker unit, but they also manage to carve that role just a bit deeper than it was before. If you missed Emmet or Classic Blue, then our dear princess is indeed a very worthy investment. But if you already have one or both competing Sync Pairs, then it might be wise to consider if a second high-powered Rock Type striker is really worth a gem investment right now.