Should You Pull? Jasmine & Celesteela 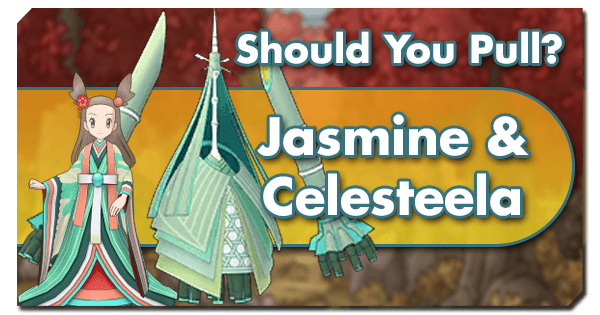 The Poké War event is reaching its final stage, and our dear Steel-Clad Defense girl is here in the garb of a princess, standing alongside the Ultra Beast Celesteela. If you thought polishing Steelix was bad, can you imagine how much time it takes this little girl to polish a 30-foot bamboo kimono rocket? Our SYP banner really should look a bit more like this: 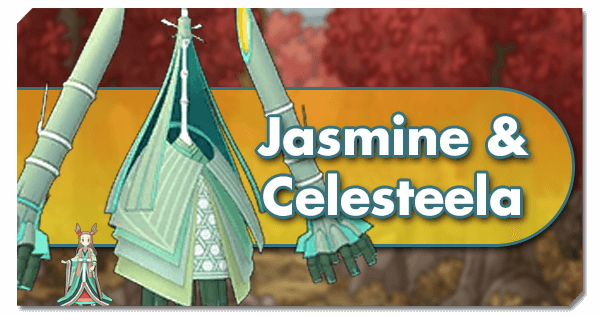 Yes; Celesteela is actually a 30-foot-tall monster of a Pokemon. But all jokes aside, Jasmine & Celesteela fill in an under-represented role in Pokemon Masters, and are arguably one of the best Support units that we’ve seen as of late. They bring a lot to the table, so let’s break down this steely Sync Pair.

To start with, let’s take a look at Jasmine & Celesteela’s stats and moves. As a tank, their defensive capabilities are the key to success, and Celesteela has decent HP and Defense, and extremely high Special Defense that makes it the one of the best Special tanks in the game when looking at stats alone. On the other side of the spectrum, their Speed is low yet not abysmal, and their Attack and Special Attack are not great. Move-wise, we start with Absorb, which is a simple, 1-bar Grass Type move that restores a tiny bit of HP based on damage dealt. Flash Cannon is next, and it’s a 3-bar Steel Type move with solid odds of dropping the target’s Special Defense. Next is X-Regen All, which applies the gradual healing effect to the entire team. Finally, Steel Yourselves!, which grants +3 Special Defense and +1 Critical Rate to the entire team with 2 MP.

Passive skills are next, and we start with Team Sharp Entry 1. This skill grants +1 Critical Rate to the entire team when Celesteela hits the field, which translates into a complete +3 Critical Rate for the team with Jasmine & Celesteela’s base kit. Group Morale Boost 9 raises the entire team’s Special Attack by 1 stage any time Jasmine & Celesteela use a trainer move, which equates to +4 at base but can easily be raised to +6 with their grid. Finally, Safety Net provides the Enduring effect to the team when Jasmine & Celesteela use a Sync Move for the first time each battle. This isn’t game-changing, but it’s definitely a nice bonus when going for the EX Support Boost.

So when we put all of these pieces together, what do we get? A Sync Pair that’s very …”special”. No, seriously; everything about Jasmine & Celesteela revolves around the Special side of the spectrum. They’re designed to tank Special hits, they support Special strikers, and they even use Special attacks themselves. This is fairly unique and useful, especially since we currently have a variety of dedicated Physical tanks yet very few dedicated Special tanks. And what a Special wall this Sync Pair is; between sky-high Special defense and great regenerative capabilities that can come from up to 3 different sources when their grid is involved that all stack, any Special attacker is going to have a tough time breaking through Celesteela. And this isn’t even what is arguably the most important part of this Sync Pair. The previously mentioned ability to max Special Attack and Critical Rate plus the rare ability to lower an opponent’s Special Defense makes Jasmine & Steelix one of the most useful support units in the entire game for Special Attackers. Their role-compression is outstanding, as the multi-layer offensive support that they offer requires 2 units to achieve in any other case. Their value in this regard cannot be understated. It’s also worth mentioning that Jasmine & Celesteela aren’t strictly relegated to the role of a tank, as their outstanding buffing profile and Tech-like skills from their grid can make them viable in a 3rd slot, where they can comfortably stand behind the team’s main wall for buffing, and even act as a secondary tank if needed.

But it can’t all be good news, can it? Sadly, no. While outstanding on the Special bulk side, Jasmine & Celesteela fall woefully short on the Physical bulk side. In fact, it’s to the point where a number of Strikers like Leon & Charizard can actually out-bulk them. Of course this isn’t taking into account stat changes or regenerative capabilities, but it’s still a fairly stark comparison of base-stats. Jasmine & Celesteela are also a bit slow on their buffs. At the very least, it will take 4 Trainer Move uses to max the team’s Special Attack, meaning it won’t normally be doable within the confines of the player’s first Sync Move cycle. However, the vast majority of Special attackers have at least some form of self-buffing available, meaning Jasmine & Celesteela generally won’t need to carry the team to quite that degree.

A great Special-support set makes Jasmine & Celesteela very valuable here, as they can enable huge damage for many Special Attackers. Moreover, most regions have at least one Elite 4 member that sticks almost exclusively to Special Attacks, giving Jasmine & Celesteela a chance to really shine defensively. Just be aware of their Electric weakness, as it’s not uncommon for Special stages to pack Electric coverage.

If the target tends to rely on Special attacks, then Celesteela can act as a premier tank while providing valuable support to Special attacking teammates. However, stray Physical moves can cut down their tanking capabilities a bit.

While Jasmine & Celesteela have a few very nice passive effects available, their lopsided defensive profile means that entering a stage with powerful Physical attacks can severely dampen their tanking capabilities. Still, they can take up the 3rd slot and grant passive Critical Rate boosts while having a 1-bar move with guaranteed MGR at their disposal to facilitate the team’s gauge.

These are generally the most important tiles on Jasmine & Celesteela’s grid:

As stated above, Vigilance is probably the best use of a Lucky Skill despite its presence on Jasmine & Celesteela’s grid due to the cost of reaching it. If your build includes it, then top secondary picks are Stoic 2 for Defense support, Fast Track 2 for Speed support, or possibly even Electric Guard to almost entirely remove Celesteela’s Electric Type weakness. However, this last option really should only be considered if you intend to use Jasmine & Celesteela extensively and despite their weakness.

Special attackers with incomplete/awkward buffing profiles like Diantha & Gardevoir and Lance & Dragonite love Jasmine & Celesteela. And the list doesn’t even need to stop there, because Jasmine & Celesteela can help other Special Attackers buff faster than they would on their own, and can also drop enemy Special Defense, bringing the resulting damage even higher than it would be normally. Heck, even Physical attackers can pair well with Jasmine & Celesteela. True, they miss out on a huge portion of the benefits of Special Attack buffs and enemy Special Defense drops but the rarity of dedicated Special tanks combined with the full Critical Rate buffing capability makes them attractive for select stages regardless of Physical/Special orientation. Another outstanding way to use Jasmine & Celesteela is on a dual-striker setup. The ability to fully buff Special Attack and Critical Rate while tanking Special hits like a champ sets the team up for greatness, and a net-zero cost Absorb makes them very gauge-friendly too.

So what exactly do Jasmine & Celesteela want from their team? Aside from a quick end thanks to a thoroughly supported Special attacker, they also appreciate a bit of help with Defense in case of a stray Physical move, and Speed to help out the team. A bit of instant-recovery/Potion support is also nice and -- oh, look; we just described Skyla & Swanna. In cases where a main attacker doesn’t care much for using Sync Moves, a dual-EX-Support setup with these two can lead to tremendous resulting damage output, and they protect one another beautifully as well.

While Jasmine & Celesteela may not find their way onto every single team due to their very specific focus, any team that calls for their skills will definitely reap the benefits of their presence. It’s funny to think that not too long ago we had a glut of Special Attack buffers but almost no Physical Attack buffers, and now the situation has made a complete 180. When pulling, just remember that Jasmine & Celesteela won’t be as universally viable as some other tanks, but when they are viable, they’ll deliver every time.

But before investing your gems on everyone’s favorite steel girl, keep one tidbit in mind: our next datamine will be dropping soon, and Jasmine & Celesteela will still be around well past that. Christmas is right around the corner, with the New Year celebration just a bit beyond that, so they may face a bit of competition. Now is the time to consider saving, but a gem investment in Jasmine & Celesteela is still an attractive prospect.