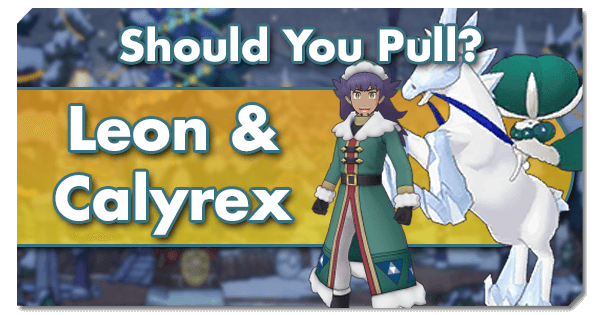 The Unbeatable Champion and the High King are here to freeze all in their path and forge a way to victory through the authority of their sheer power.

Winter is coming. The cold wind blows away the last remnants of autumn and glares harshly upon those who haven’t prepared for the lean times that it can bring. Winter is harsh, winter is ruthless, and winter is unforgiving. But winter also brings us a time of year dedicated to bringing out all kindness in this world, and this year Pokemon Masters has chosen a Champion and a King to celebrate the magic of this wonderful season. Poised for victory, Leon & Calyrex: Ice Rider have made their way from the Crown Tundra in Galar down to the island of Pasio in order to reach out a cold yet friendly hand for the Holiday season, as they lead us into the festivities of Christmas and the joy that it brings!

Stats-wise, the real stand-out here is Attack. Leon & Calyrex sport one of the absolute highest Attack stats in the game, which sets them up for offensive victory right out of the gate. To offset this, they have middling base Speed and low bulk for the most part. But stats alone don’t make a Sync Pair, so let’s move on to moves. Glacial Lance is a 4-bar, AoE attack. Its power is on the low side, but that’s made up with their aforementioned Attack and a few other bonuses attained via their grid. Dire Hit + and X Speed + are next, and they offer maxed Critical Rate and Speed respectively. Finally, we come to Champion Gift!. This Trainer Move offers +2 Attack, +2 Defense, and... that’s it. It feels underwhelming when compared to the recent glut of monstrous trainer moves, but it does its job.

Next, we come to Passive Skills. Cold Snap 2 gives Glacial Lance, an AoE move, a 30% chance to Freeze. On this note, their grid also has a tile that will bring this number even higher, resulting in the highest Freeze odds in the game to date. Mighty Command 9 offers the Physical Move Up Next effect any time that a Trainer Move is used. Keep in mind that this is the same effect that was just introduced with Guzma & Buzzwole, so it grants +40% damage per stack, and stacks up to 10 times for a potentially nice bonus to damage post-setup. Finally, Victory Flex 2 grants +2 Attack every time Leon & Calyrex knock out an opponent. And between high AoE damage and potentially great Sync Move damage with their grid, this skill is likely to activate fairly early on as Calyrex blankets the battlefield in snow and ice.

Right off the bat, it’s easy to see that Leon & Calyrex are harbingers of winter. They have outstanding Ice Type AoE damage from both Attacks and Sync Moves, and they can potentially freeze the entire enemy team with every blow. In this, they are actually fairly simple in design. Their power is focused and effective, and doesn’t require much by way of special setup requirements in most cases. They can easily act as the main attacker on many teams, or can go into a dual-Striker setup with a bit of move gauge support, adding to their potential versatility.

Weakness-wise, Leon & Clayrex are a bit awkward to set up. They will take at minimum 4 moves to work up their maximum buff-enabled Attack and Critical Rate, with Attack in particular falling to +4 until Calyrex scores a KO. They also really want Speed or Move Gauge boosts to remedy their low Speed stat and potentially raise the power of Glacial Lance via their grid, so that adds even more time to set up without support. It is worth noting that Mighty Command 9 does lessen the impact that having to spend turns on Trainer Moves has on their damage output, but keep in mind that it is a net-loss in damage to use a Trainer Move over Glacial when fully buffed in most cases.

AoE Freeze plus high AoE damage can deep-six many stages, especially those weak to Ice. Leon & Calyrex are poised to be very useful here, especially with the new point-system update.

While not the absolutely most reliable tactic, the ability to Freeze could come in clutch on some Legendary Arena stages. They’re also great picks for any multi-enemy stages like Latias and Latios. It’s also worth noting that the Galar Theme Skill has a lack of Sync Pairs carrying it, so Leon & Calyrex could be very useful for future missions.

Freeze and slaughter is the name of the game here. If the opposing team isn’t immune or highly resistant to Freeze, then they’re going to be sitting doing nothing a lot of the time while Calyrex beats them over the head with what is basically a very large icicle.

The need to buff up and a lack of great synergy with the top Battle Villa Support units makes Leon & Calyrex a bit iffy here. They do boast a potentially tremendous AoE Freeze chance, but if keeping the opposing team from moving is the goal, then Serena & Delphox can play that game even better with AoE Hypnosis to abuse Sleep.

These are generally the most important tiles on Leon & Clyrex’s grid:

With maxed Critical Rate and a mix of Attack Move and Sync Move damage, Critical Strike 2 is the winner yet again.

While largely self-sufficient, Leon & Calyrex do have a few needs. A unit that can max out Attack and Speed is useful for faster and more complete setup. Hilbert & Samurott, Caitlin & Sableye, and Elio & Primarina all fill this need nicely, just to name a few. While it’s true that the Physical Damage Up Next effect stacks up with each Trainer Move use, it’s generally better to attack at 100% damage instead of spending an additional trainer move and boosting for 40%. The one variable here is for Sync Nuke builds, which can rack up impressive damage when compounded with additional boosts. Rosa & Delibird also get special mention here, as they synergize well with a Hail team while providing useful Attack buffs and Speed / Move Gauge sustainability.

Offensively, Leon & Calyrex can pair with Ghetsis & Kyurem to double-up huge AoE Ice Type damage and potentially even stacking AoE freeze chances, but this setup will require Move Gauge support, an will also need to fill Ghetsis’ own offensive needs. Sync-Nuke builds reliant on Hail will obviously require a Hail setter, and our options for Hail at this point are Candice & Abomasnow, Steven & Alolan Sandslash, and the upcoming Nessa & Eiscue. Candice & Abomasnow are the most generally available, but don’t add a whole lot beyond Hail currently, though that will change soon with the introduction of their Sync Grid. Steven & Sandslash require Sync Moves to set hail, which makes them incompatible with a Hail Sync build. Finally, Nessa & Eiscue have what is probably the best overall set, with some very interesting Tech and pseudo-Support options for added synergy.

Leon & Calyrex now take the crown of the best general Ice Type damage-dealer in the game. They are powerful and horribly debilitating, making them a very attractive investment. However, as of right now, Ghetsis & Kyurem can handle anything that the Champion and King can while staying Free-to-Play. This could change in the coming days with the upcoming release of the Legendary Gauntlet, but it’s definitely a consideration worth weighing. Also, this month includes the release of the absolutely outstanding Lusamine & Necrozma and Sonia & Yamper, so Leon & Calyrex have some serious competition for any gems that are slated for spending in December. Still, should the Unbeatable Champion and the High King be your goal for this winter season, then they will not disappoint.