Should You Pull? Lusamine & Necrozma 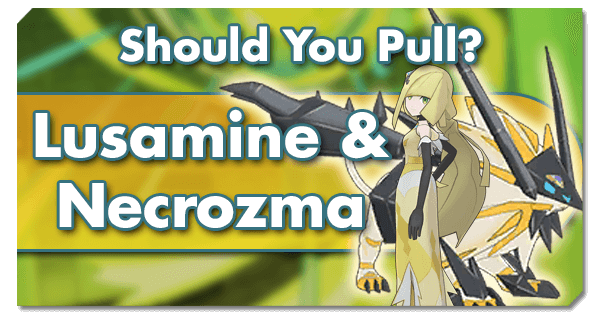 Not satisfied with her performance alongside Pheromosa, Lusamine is back. And this time she’s ready to take this game by storm, pairing up with the big-name Legendary Pokemon of Alola; Necrozma. Together, they’re ready to burn the sky itself with all-encompassing light. This is the first 6/6 rating that we’ve given here on Gamepress in a while, and it is definitely earned! With absolutely phenomenal damage output that hits the entire opposing team, Lusamine & Necrozma are set to redefine what we count as a good Striker.

In reviewing what Lusamine & Necrozma can do, it’s best to check their stats first. Their Special Attack is decent, their Speed is okay, their Attack literally doesn’t matter, and their bulk is actually pretty high for a Striker. Ah, but these numbers are deceiving. When using a Sync Move for the first time, Dusk Mane Necrozma will transform into Ultra Necrozma in a manner similar to Mega Evolution. Note that I said similar to, because this form doesn’t simply add stats, it multiplies them by 1.2x, which equates to huge increases, and even more stats with each Power-Up applied. Lusamine & Necrozma’s moves start with Mirror Shot, which is… a thing. It has disappointing damage, a Steel typing, and the ability to drop the target’s Accuracy on hit. It can be nice for scoring a cheap and/or off-type attack when needed, but that’s pretty rare. Next is Prismatic Laser. This is a 4-bar Psychic Type move that is one of Necrozma’s signature moves. Its base power is a tad low, but that’s easily rectified moving forward. Dire Hit + is next, and it’s exactly like we’ve seen: it enables maxed Critical Rate easily. Finally, Luminous Love! Is the main Trainer Move on display here. +6 Special Attack and -2 Sync Move counter at the cost of -1 Speed is very nice, and does the job easily. Finally, we have their Sync Move. Remember when I said that the transformation to Ultra Necrozma is like a Mega Evolution? Well here’s where it differs: this Sync Move has a full 300 base power. This is tremendous for a Sync-Transforming unit, and allows for devastating Sync Move damage thanks to their grid’s multipliers, on top of absolutely stellar attack damage.

Passive Skills are extremely interesting this time around. Alolan Spirit is Lusamine & Necrozma’s Master Skill, and it provides huge gains to Special Attack and Special Defense that get even stronger with more Alolan units on the team, to the point where it can become comparable to a Weather/Terrain boost when maxed out. Expand Reach is next, and it changes all of Necrozma’s attacks from single-target to AoE after its first Sync Move with no power loss. This is where Prismatic Laser becomes really, really good. Moving on, the following skills actually change post-Sync: Entry Freebie grants the Free Move Next effect when entering the battle, and Healthy Superhit grants the Super Effective Up Next effect when entering the battle with full HP. Post-Sync, these become Superduper Effective 2 for more damage on Super Effective attacks, and Move Gauge Refresh 4 for a 50% chance to restore 1 Move Gauge bar after the use of any attack.

Pros and cons… let’s see... Lusamine & Necrozma hit like ground zero of an asteroid impact. It’s hard to overstate just how much damage they can do. Once Ultra Necrozma takes center stage, they’ve probably still got Super Effective Up Next and Free Move Next available, meaning their Sync Move will burn, and then Prismatic Laser is free, so early-game is extremely easy to play through, and by the time that’s over, a lot of Pokemon are already going to be very unconscious. We’re also dealing with one of the bulkier Strikers in the game, so many AoE or Sync Moves are unlikely to be a huge issue.

Truth be told, they don’t have that many. Superduper Effective 2 makes them a bit less powerful in non-Super Effective stages, but the damage loss isn’t huge. They also won’t have time to max out their Critical Rate and Special Attack before their first Sync Move if a team-mate manages to tick down the Sync Move timer to the full -3 needed to cut off one cycle. Their speed could also use a bit of work, so that’s worth some team support as well. But even if these issues aren’t all dealt with, Lusamine & Necrozma are still outstanding, and can leverage their huge offensive presence for some very fast stage clears.

If a stage is weak to Psychic, then Lusamine & Necrozma basically turn it into easy mode, And if not Psychic-weak, the raw power is enough to destroy the stage anyways. They have all of the tools that they need to absolutely annihilate the competition with ease.

As is usually the case, playing around boss weaknesses is generally going to be for the best. That said, even in a neutral scenario that can definitely deliver, and they could be a great generalist damage-dealing unit for the upcoming Legendary Gauntlet.

Huge AoE damage is definitely appreciated here, though the gimmick-centric strategies that these battles tend to employ could put Lusamine & Necrozma at a bit of a disadvantage in some cases.

Reliance on Trainer Moves is a definite disadvantage here, but they could be good if given an MP Refresh on their trainer move and paired with Red & Snorlax for free Critical Rate boosts. Of course, this is only viable if you don’t mind resetting for said MP Refresh. Sycamore & Xerneas are also viable here (as they always are), but the early Sync Move competition is a bit awkward.

These are generally the most important tiles on Lusamine & Necrozma’s grid:

This is one of those Sync Pairs that wants ⅗, but is perfectly great even without it. Still, a candy investment would definitely pay off here!

With a skill that grants Super Effective Next at the start of the battle, Lusamine & Necrozma generally don’t want to attack pre-Sync. Although if your team manages to fill in the gap and knock the full 3 ticks off of the Sync Move counter, then Lusamine & Necrozma won’t be able to max their Critical Rate before their first Sync Move. They also appreciate some Speed support, as the loss of speed from their Trainer Move combined with their 4-bar main attack can lead to issues.. Sadly, no unit in the game currently offers +1 Critical Rate, -1 Sync Move counter, and +Speed at the same time, but even an incomplete set among these requirements is definitely still more than enough to wreak havoc. Kiawe & Alolan Marowak are prime picks for this role, as they can take care of the Speed and Critical Rate issues with ease while also causing Lusamine & Necrozma’s Alolan Spirit Master Skill to become even stronger. Masked Royal & Incineroar can also help with Speed and an Alolan Spirit buff, but wants a bit of support for Critical Rate in particular as well. Sygna Suit Elesa & Rotom or Red & Snorlax can tick down the Sync Move counter and finish maxing Necrozma’s Critical Rate with one move use, making them a solid tank pick for the job. Ingo & Excadrill have Critical Rate and Free Move support, and can also buff team Speed. Bianca & Musharna get a particularly glowing endorsement here, as the power of Psychic Terrain provides a huge damage boost, and Precognition 2 also offers a grid-based Speed solution, though it is temporary. If you manage to work out the best supportive option, more offensive options can really drive home the power on display here. And chief among those options is probably Lillie & Lunala. Having dual Master Skills that also power eachother up is huge, and Lillie & Lunala can also set Move Gauge Acceleration via their grid, and even potentially get that coveted -1 Sync Move Counter with Propulsion 1, though the odds aren’t great. Overall, this team comp is very competitive with Psychic Terrain for sheer damage output from their high synergy, though Speed support is definitely recommended! Lear & Hoopa can also come in to help out, knocking the Sync Move counter down extremely quickly and doubling up tremendous Psychic Type damage that is sure to obliterate many, many stages. But, again, Speed support will be virtually mandatory in this case.

Definitely. Lusamine & Necrozma are entering the game as arguably the new best Striker unit, making their value very high. They bring a lot to the table, and have the potential to absolutely annihilate many stages with minimal setup. But it’s worth noting that those who already have Lear & Hoopa might find the Pasio Prince to be more than enough for their needs, though the promise for new, harder content might just bless having two different top-tier Psychic Type attackers ready and waiting. Either way, Lusamine & Necrozma are definitely set to take this game by storm and shed a blinding light on any who would oppose them.