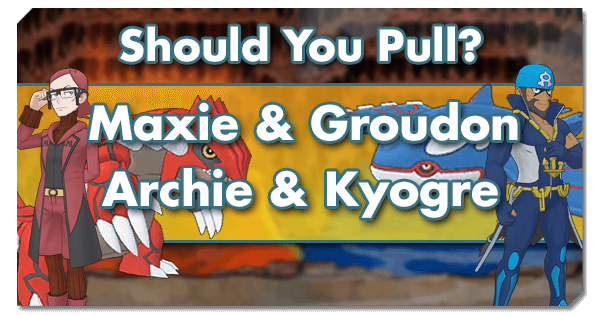 The sun burns and the rain soaks, ravaging the earth with the power of the forces of nature themselves. The earth quakes with fear, ready to be torn asunder as ancient powers collide. The island of Pasio, alone in the oceans, is the epicenter of this clash, and at the very center stand Maxie and Archie, with command over the primal forces of Kyogre and Groudon. With Pokemon and Trainers alike locked in this sworn struggle, what hope remains for us? And more importantly, why did they steal all of my gems?!

Archie & Kyogre and Maxie & Groudon are back, standing at the precipice of the Hoenn Villain arc and finally breaking an 18 month period in which no Master Sync Pairs have appeared more than once. Because these two are such a big deal, we’re going to break our normal “Should You Pull” format and will instead look at these Master Fairs a little differently. For starters, we’re going to skip the overviews that we normally do, as Archie & Kyogre and Maxie & Groudon have both been around for over a year now. If you want to familiarize yourself with what they do, we recommend that you start by taking a look at their individual pages above.

Instead, this article’s purpose is to revisit this climate-altering duo and their super-ancient Pokemon to see how well they hold up today. As our first Master Fair rerun since the concept was introduced back at the 1.5 year celebration, this is definitely a big deal, but just how important are Archie & Kyogre and Maxie & Kyogre today?

When Archie and Maxie first dropped, they joined the game as two of the most powerful Strikers to date, and they re-shaped how we looked at Water- and Ground-Types respectively. Their auto-setting weather capabilities were objectively huge in a meta that was just starting to really  focus on weather, and their focused Master Passives were potentially earth-shaking with the right team setups, and all of these advantages gave them the ability to hit hard and even support their team in various ways, all of which made for a pair of titans that were definitely considered to be must-pull on their introduction. However, a lot has changed since they made their triumphant debut, so it’s important to see just where they stand now.

While Archie and Maxie were initially among the strongest damage-dealers that Pokemon Masters had ever known, the state of the game has changed a bit since their initial release. Now, the bar is set by monsters like Sygna Suit Serena & Zygarde and Sygna Suit Lusamine & Necrozma who have redefined what we consider peak damage output. Does this mean that Archie and Maxie have been left in the dust? No. However, it does mean that the world has been moving while these two have been standing still.

Archie has arguably been buried a bit deeper by the sands of time in this regard. Water Type damage has fallen from the grace that Kyogre once achieved, and Archie & Kyogre also have a bit more competition than they once did. Dojo Uniform Gloria & Urshifu - Rapid Strike in particular can unload massive Water Type damage, and also soften up their target for their team, making them pretty competitive with Archie & Kyogre on many fronts while also bringing more supportive functionality to the table than simply making it rain at the start of the fight. We’ve also seen the rise of “lesser” Water Types that, while not as powerful, can get most of the same jobs done, which can make Archie & Kyogre a bit less valuable as well. These Sync Pairs include Nessa & Dreadnaw, the Villain-arc-updated Cyrus & Palkia, and the recently-EX-eligible Barry & Empoleon, with each sporting a unique set of strengths and weaknesses that can make them able to clear most stages that Archie & Kyogre can with a bit of proper support. We’ve also seen some new competition on the Electric side, but not as much. The current new threat is New Year's Volkner & Electivire, who can dwarf Kyogre’s thunder, while older competitors like N & Zekrom still wait in the wings.

Maxie, meanwhile, has had a bit less to worry about, but has seen some new threats as well. While Ground is still a rare type, the introduction of the massively powerful Sygna Suit Giovanni & Nidoking finally gives the Team Magma leader a run for his money on that front while also covering two other rare types, while the ever-dominant Sygna Suit Serena & Zygarde enjoy moonlighting in Ground Type damage as well. And while Groudon’s Solar Beam is still a force to be reckoned with, new and existing attackers like Special Costume Sonia & Tsareena or Sygna Suit Erika & Leafeon can put up staunch competition when the power of nature is needed.

Alongside new competitors, this duo of Sync Pairs has also seen new potential arise as well, as Sync Pairs that synergize with them have taken to the stage. While new pairs offer competition, many of them may also pose new prospects for the leaders of Team Aqua and Team Magma.

Archie’s biggest new threat for water Type damage is definitely the aforementioned Dojo Gloria & Urshifu. However, this Galarian explorer and her battle-bear can also make for a great ally as well. Gloria’s great move gauge management means that she can generally slot in alongside Team Aqua’s leader and attack the center hard while Archie takes on the entire team at once. With a bit of support, this is a potentially devastating combo that should not be ignored. And speaking of Support, the introduction of Sygna Suit Kris & Suicune has given Archie & Kyogre access to faster setup, higher damage output thanks to the Special Attack Up Next effect, and another reliable Rain setter, all of which give them the power and longevity needed to tackle the majority of stages without issue. This also means Archie's Special oriented "competitors" actually get even better as partners for this core, like Cyrus & Palkia or May & Swampert, but they can also work on the same team to double-up Water Type damage output. On the Electric side, the previously-mentioned New Years Volkner & Electivire can double-up duty, and the relatively new Classic Elesa & Emolga can set Electric Terrain, melt the opposing team’s stats, and drop absolutely thunderous Sync Moves that Archie & Kyogre really don’t mind sharing.

Maxie, meanwhile, has found new prosperity as of late from several sources. While it’s substantially harder to pair the Team Magma Leader with Sygna Suit Giovanni due to move gauge management issues, Maxie & Groudon can also go in an entirely different direction. The newly released Courtney & Camerupt can provide massive damage-boosts to their leader, to the point where they can at least semi-compete with many of the top-tier damage dealers in the game. The one issue here would have to be with Speed. But a few of our newer units, in particular Sygna Suit Morty & Ho-oh, can slot in very nicely to fix this problem. This specific team-comp in particular can not only alleviate the tectonically slow Team Magma duo, they can also extend the Sun for Groudon and even help with team setup. When combined, these three make for a devastatingly powerful core, and can come together to challenge many of the game’s hardest hitters. Anniversary Raihan & Flygon can stack a number of Physical Attack Up Next boosts and raise the sun with a Max Move for some potentially devastating burst tactics, and Sygna Suit May & Blaziken can add some fiery damage output, team support, and Sync Move counter help to make clearing stages all the easier. For a bit more flexibility, the previously mentioned Sygna Suit Erika & Leafeon can deal great Grass Type damage and extend the sun, while Sygna Suit Lyra & Celebi can cripple the opposing team and set up Grassy Terrain, which can potentially make Solar Beam go nuclear.

Maxie and Archie have fallen off a bit, but are still genuinely useful, as we’ve already highlighted. Their return gives us the chance to add two very valuable Sync Pairs to our arsenal, so this should be a no-brainer, right?

The problem here is the timing. The three-year celebration is mere weeks away, so spending gems on a 1% chance could very well drain all of your resources before this vaunted event can drop, especially if your goal is to pick up both. On top of that, Maxie and Archie run into October, so we have ample time to cherry-pick out favorite Sync pairs from among the 3-year offerings. For these reasons, it’s best to at least wait until the next Datamine before taking the plunge, as what comes next might be too good to miss.

If you do decide that this duo is worth the investment, then Maxie is probably the more versatile option of the two, as he has less competition and can stand a bit stronger with the right team comp. That’s not to say that Archie is bad. Quite the contrary, in fact. Archie still hits like a truck, and arguably has more flexibility in terms of team comps. So, in the end, it’s probably best to pull for whichever of the two fills a need in your team the most, or aim for both if that’s your big goal. Either way, best of luck!