Should You Pull? Morty & (Mega) Banette 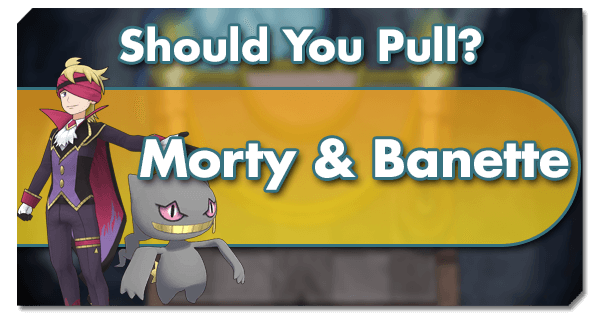 A unique secondary attacker/status setter that can debilitate the opposing team and attack without needing to use the Move Gauge.

Our list of Mega Evolutions represented in Pokemon Masters EX is ever-growing, and one of the latest Sync Pairs to make use of the coveted mechanic are Morty & Banette for Halloween! These two are ready to make life hard on the opposition and easy on the team, so turn them loose and go Into the Night!

So what exactly do they do? As always, let’s break it down. To start with: their stats are… not good. Their offensive stats are low, their bulk is low, and their speed is not great. However, much like Acerola & Mimikyu before them, their goal is to circumnavigate their stats with gimmick! So what is this gimmick? To start with, let’s look at their moves. First up, we have Will-o-Wisp to spread Burns around reliably. Next is the tried-and-true Shadow Claw, which is replaced by the stronger 0-bar/3 MP Shadow Sneak after Mega evolving. Their Trainer Moves are Dire Hit +, and Into the Night!, which boosts Attack and Defense by 2 stages each, and Accuracy by 1 stage, which patches up Will-o-Wisp’s tendency to miss at the most inopportune times. Moving on, we have their passive skills. First up is the ever-popular Go Viral 9, which allows Will-o-Wisp to burn the entire opposing team in one move, Burn Synergy 5, which grants a significant damage boost if the target of an attack is burned, and Wide Awake, which keeps Banette from falling asleep. This last skill is the really interesting one, because Mega Banette loses it, and instead gains Searing Quick Combo 9. This lovely skill ties the whole kit together, by making it so that Shadow Sneak has a 100% chance of restoring 1 MP if it’s used against a burned target, translating into a spammable 0-gauge move with solid damage output! It takes a bit to get here, but it’s a fairly fun strategy to say the least!

So what kind of advantages do Morty & Banette bring to the table? Well, they’re able to inflict AoE burn with ease, and can even drop a target’s Attack, as we’ll discuss more when we come to their grid. They are also largely self-sufficient offensively speaking, needing only an additional +2 Attack buffs or one MP refresh of their Trainer Move.  These factors, combined with the ability to spam Shadow Sneak free of charge, make Morty & Banette surprisingly flexible and easy to use. They can fit in perfectly with most tanks, and play very well with most Strikers, so they definitely have ease-of-use on their side. Also worth noting is a quick reminder that the Burn status lowers the victim’s Attack stat, so that fact combined with their grid-added capability to debuff a target’s Attack and their ability to self-buff Defense can make them terribly effective against stages that stick to Physical moves.

But, sadly, it’s not all good for our malevolent spook and his trainer. First up is the previously mentioned issue with their stats. Their foundation is shaky, and their kit arguably doesn’t quite make up for this fact. Their Sync Nuke can be nice with a bit of support, and their damage is decent considering its zero-cost, but they are not going to win any medals for high damage output, and are still pretty frail. We also have a bit of an issue in their need to Mega Evolve in order to take full advantage of their unique gimmick. In today’s meta, Sync Moves are more valuable than ever, especially early-game. It might be better to use a Sync Move on an EX Support unit, and it will be hard to justify using Banette’s Sync Move if paired with another Mega Evolution. It’s possible to just use base-form Banette, but the main reason to use Banette & Morty only really shows up post-Mega. So, ironically, it can be hard to actually fit this Sync pair, that’s obviously designed to be an easy fit, keep in mind, onto a team.

If you can get Mega Banette onto the field without losing too much ground by not using a Sync Move on something else, then this Sync Pair is very reasonable in the Champion Stadium. For example; every Champion Stadium to date has had at least one member that almost exclusively uses Physical moves, which can make Banette’s debilitating properties all the more attractive here.

Burning can be valuable on select stages, as can a few of Morty & Banette’s other advantages. They’re also a bit easier to fit onto teams here, as the first Sync Move or two can be a bit easier to distribute for the sake of setup. The fact that they have the Johto Theme Skill does have a bit of value for missions, as we don’t currently have many strong Johto representatives in the game. And their Gym Leader Theme Skill is also frequently useful.

The fact that Morty & Banette take time to setup and aren’t very bulky can make them a liability here. Select stages that appreciate their unique gimmicks will be a breeze, but in general they’re not hugely useful.

The fact that Morty & Banette can infinitely restore the MP of Shadow Sneak is nice, and the ability to spread Burns can be helpful. but the setup needed puts them at a definite disadvantage here. Their stat buffs all rely on skills, so their damage isn’t outstanding, and they have very limited Tech utility against stages that use Special attacks. We also have the issue of needing to Mega Evolve, as this competes with important units such as Sycamore & Xerneas, which is not a great trait to have here.

These are generally the most important tiles on Morty & Banette’s grid:

Finally, these are the tiles that are probably best to ignore unless they somehow play into a bigger strategy in some way.

Team-wise, If giving up an early Sync Move isn’t a huge deal, then slow Sync Pairs like Halla & Crabominal appreciate the fact that Mega Banette won’t touch their precious Move Gauge. Sync Pairs that are a bit lacking on the Physical bulk such as Lillie & Clefairy also appreciate the Burn and Attack drops that Morty & Banette bring to the table. It’s also worth mentioning that combining Burn and Attack drops with something as physically bulky as Jasmine & Steelix against a stage that only uses Physical moves is potentially hilarious. It’s a bit of a meme team, but it’s a good way to make any physically bulky Support unit virtually immortal.

In terms of what they need themselves, a tiny bit of Attack is appreciated, and easy to obtain from many, many Support units. Help dropping Attack is great early-game as it can allow for maximum Sync Nuke damage, and units like Champion Iris & Hydreigon or Ghetsis & Kyurem can fill that need perfectly. Help getting to an early Sync Move is also nice, and Sygna Suit Elesa & Rotom can provide -2 turns with one skill use. This, when combined with Head Start 1 from Morty & Banette’s grid, can successfully cut one full cycle off of the first Sync Move.

As discussed, it can be a bit hard to fit Morty & Banette onto a team without sacrificing something valuable in the process. However, they are effective if played to their strengths, and can be useful in some stages. They’re also really fun, sporting a unique gimmick that can be rewarding for its entertainment factor alone. Honestly, this is more a want pull than a need pull, so it’s probably best to only invest gems out of love for the character, or the desire to try something a bit different.