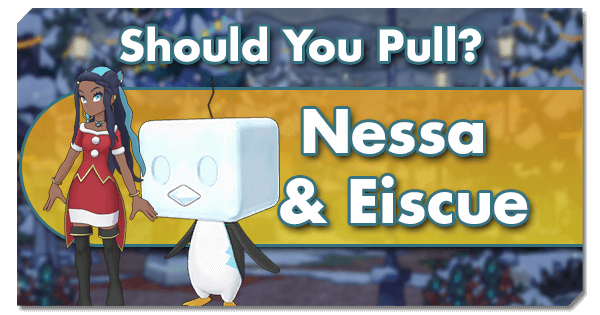 Gone away is the bluebird, here to stay is a new bird. We sing a love song as we go along, walking in a winter wonderland. The Holiday Season is in full swing; the tree is up, the stockings are hung, and the gifts are wrapped. But where is our snow? Ah, it’s right here! Nessa & Eiscue have made the scene, and they will blanket the world in white just for us. So let’s celebrate this wonderful time of the year as we call on them to give us a White Christm- … WAIT, THAT’S NOT SNOW, IT’S HAIL! QUICK, COVER YOUR HEADS AND GET THE CHILDREN INSIDE BEFORE THIS HOMICIDAL PENGUIN GIVES SOMEONE A CONCUSSION!

With that strange intro out of the way, let’s look at what this pair can do. Starting with stats, Nessa & Eiscue have decent Attack and middling Special Attack. Bulk-wise, they’re simply “okay”, finding themselves able to take a few hits before going down. Finally, their speed is… not great. It’s pretty low, but this isn’t quite as big of an issue as it appears, as we’ll get to shortly. Moving on to moves, the crown-jewel of their moveset is good, old fashioned Hail. As should be pretty obvious, this sets the weather to Hail for around one average Sync Move cycle on activation. Icicle Crash is next, and is a 3-bar move with solid damage and a chance to Flinch, but imperfect accuracy. Powder Snow is a 1-bar, AoE move with a tiny chance to Freeze. Finally, From Me to You! Is a Trainer Move that grants +2 Attack and+1 Critical Rate, and can also grant the entire team the Gradual Healing effect if used during Hail.

Passive skills come next, and we start with an obvious pick: Snow Shelter. This protects Eiscue from Hail damage, which is always nice for a Hail unit. Hasty Hail 3 is next, with a very nice move gauge boost effect during Hail to help mitigate their previously mentioned Speed issue. And, finally, we come to Ice Face. This skill is responsible for the big ice cube that we see on Eiscue’s head (no, that’s not actually its head). While it’s active, Eiscue can outright negate one Physical move that it takes, but the ice cube on its head then shatters and it changes from its “Ice Face” form to its “Noice Face” form. Eiscue can then reclaim its Ice Face when it uses Hail. Keep in mind that this only works against Physical moves, as Special moves will just ignore it entirely. This one is a little strange, but at least it’s true to the main series games!

So what exactly does all of this make? Well, all-in-all, we have a Hail setter with good damage output and some potentially annoying Tech effects as well. Hail may not be the most in-demand weather, but it’s nice to have around to support specific strategies. But Nessa & Eiscue have more utility than just “obligate Hail setters”. They actually have solid damage with Icicle Crash, and can also drop decently strong Sync Moves with just a bit of setup. They also have the nice advantage of their Ice Face passive skill occasionally negating damage from common moves like Earthquake and Bulldoze, giving them added longevity.

But, as always, we have to look at the other side as well. To start with, while Nessa & Eiscue bring more to the table than just Hail, they need Hail in order to even get to the table in the first place. When Hail isn’t up, they will drag down the team with their low Speed and poor damage output, offering little more than occasional Flinches. They also have the previously mentioned issue of supplying one of the least important weather types in the game. Every weather has its Super-Stars, but Hail is a bit lackluster, only boosting a few Sync Pairs in general, with the only really standout candidates being Leon & Calyrex, and arguably Hala & Crabominable or Steven & Alolan Sandslash if pushing it further. For these reasons, Nessa & Eiscue are unlikely to see much general utility in most game modes.

Stages that make field effects permanent can turn Nessa & Eiscue into a super-charger for Hail teams. That aside, they’re fine here with a bit of proper team building.

These are gimmick battles, and Nessa & Eiscue are pretty gimmicky themselves. Should the stars align, the swimmer and the penguin just might be the ultimate counter to select Legendary Pokemon. That said, they’re not great in general.

These battles tend to have at least a bit of a specific gimmick, so it’s really a matter of how well Nessa & Eiscue interact with said gimmick. If the other team likes a specific type of weather, then a well-timed Hail can make all the difference. That said, they’re a bit weak here just in general.

These are generally the most important tiles on Nessa & Eiscue’s grid:

Critical Strike 2 is the way to go for any damage-focused build. However, a pure utility build could take advantage of Powder Snow’s ability to hit multiple targets with Defense Crush 2 to help out the team a bit more.

The natural pick for a teammate is Leon & Calyrex for their ability to capitalize on Hail. However, Pryce & Dewgong and Hala & Crabominable also have the ability to enjoy the benefits that Hail brings. And while Steven & Alolan Sandslash set their own Hail with Sync Moves, the combined ability to set Hail early and basically have never-ending Hail allows them to synergize well with Nessa & Eiscue. On the Support side, Rosa & Delibird become pretty bulky in Hail, and Glacia & Glalie become… more usable.

In terms of actually providing support for Nessa & Eiscue, finishing up their Attack and Critical Rate are important, and some Speed support is also great for Ramming Speed builds. Hilbert & Samurott and Kiawe & Alolan Marowak are the natural picks here, as they’re able to fill in every need with ease.

Nessa & Eiscue are in a bit of an awkward position right now. Only a few Sync Pairs can really take advantage of Hail, with the most stand-out candidate being Leon & Calyrex at the moment. And while this could change in the coming weeks and months, it’s hard to recommend investment in Nessa & Eiscue at the moment, especially with Candice & Abomasnow mere days away from getting their very own Sync Grid. And then we’ve got the issue of Nessa & Eiscue directly competing with Leon & Calyrex, who are running at the same time. Overall, it wouldn’t be a terrible decision to spend your gems elsewhere, or just save for the just recently datamined Sync Pairs that will be here in just a few short weeks.