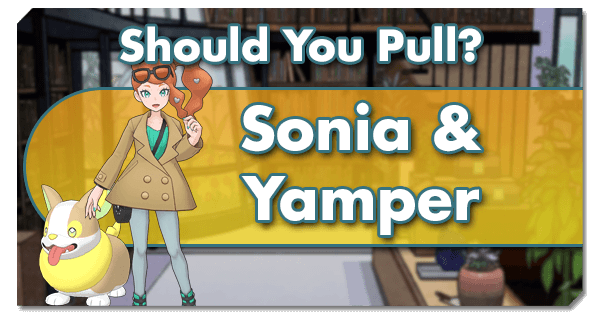 Who’s the goodest boy? Yamper’s the goodest boy! With an appearance that beguiles their raw utility, Sonia & Yamper hit the scene as one of the new best Support units in the entire game. With the advantage of an outstandingly focused buffing profile and supportive options that provide surprising longevity in most battles, they’ve taken the stage in a big way, and are here to ensure that their team is ready to achieve victory!

Let’s just get this out of the way up front: Sonia & Yamper are very bulky. Despite being nothing but a little sparky-pup, Yamper has the HP and Defense needed to tank physical hits better than base-form Steelix & Jasmine. Their Special tanking capability is a bit lower, but it’s still well within the upper bulk echelon. They also have one of the highest Speed stats of all Support units currently in the game (we don’t count Sabrina & Alakazm, they’re just showing off at this point), meaning they really don’t drag down the team on that front, which definitely has its advantages as we’ll soon see. Finally, Attack and Special Attack don’t really matter, as you’re not going to pick up Sonia & Yamper specifically for their damage output.

Sonia & Yamper’s moves are surprisingly straight-forward for a Sync Pair so thoroughly touted to be amazing. For attacks we have Tackle, which is… Tackle… and then Spark, which is a 2-bar move that has solid paralysis odds. This is followed by Potion, which is always appreciated on a Support unit, and Ruff Buff!, which is objectively one of the best names for a buffing move ever. This trainer move provides the team with… +2 Attack and +2 Defense. Seriously? How the heck is this considered one of the best Support units in the game? Up until now, it just feels like an offensively-oriented Skyla & Swanna. Maybe their passives will make a difference? But before we go ahead and we cross that bridge, let’s take one quick step back. It’s exceedingly important that I take a moment here to mention the fact that Sonia & Yamper’s Sync Move is called Goodest Boy Wild Charge, which is objectively the best thing to ever grace Pokemon Masters.

So let’s finish up the basic overview with passive skills. Right off the bat we have Team Swift Reaction 9. This skill grants +1 Speed to the team any time that Yamper takes a hit. And when you consider just how blasted bulky this thing is plus its potion utility, +6 Speed for the entire team is a definite possibility. And speaking of Potion: Catalyzing Recovery is a nice little skill that provides Move Gauge Acceleration any time Potion is used. This is very handy, as it’s on-demand acceleration and healing in one move, which gets even stronger as Yamper takes hits and boosts team Speed. Finally, Defense Crush 9 is an effect that drops the target’s Defense any time they’re attacked by Yamper, which opens the opposing team up to even more damage from Physical attacks.

To summarize the individual pieces of Sonia & Yamper’s kit, it’s clear that we merely have a mix of great and mediocre advantages, with no stand out “THAT’S what makes them great!” effect like what we see with Ingo & Excadrill or Red & Snorlax. This should really spell out a Support Unit that’s strong, but not “outstanding” on paper. But the reality is that Sonia & Yamper are actually very gestalt in nature; that is to say “the whole is greater than the sum of its parts”. When put together, we have a Sync Pair that isn’t flashy or ultra-unique, but we also have a Sync Pair that does exactly what it needs to do by filling in gaps and binding the team together like glue. With a bit of help from their grid (as we’ll address shortly), Sonia & Yamper can max team Attack and Critical Rate in as little as 3 moves, can become as debilitating with their attacks as some Tech units, and can even take advantage of the same Potion MP Refresh/Master Healer setup that made Skyla & Swanna superstars when Sync Grids first dropped. And here’s the real kicker: it all synergizes together back to their primary goal and theme. Their focused buffing profile and Speed/Move Gauge Acceleration capabilities make them perfect for dual-Striker setups, where they can provide the Move Gauge support needed to keep up offensive pressure, buff up Attack and Critical Rate, and keep the team safe for a prolonged period via high bulk, Defense buffs, and Potion use. This is an adaptable and versatile Support unit that can provide huge dividends for Physical teams, and their potential value should not be ignored.

So what do we have for the down-sides? For one, Sonia & Yamper are semi-obligate Physical attacker support, which is a pool that’s become pretty full as of late. They have strong competition with powerful units like Hilbert & Samurott and their lightning fast setup, though the comparison here is a matter of speed of setup Vs longevity. And speaking of buffing; while definitely above-average in terms of buffing speed, Sonia & Yamper will need to score an MP refresh on their Trainer Move via their grid to hit the full +6 Attack/+3 Critical Rate. This isn’t a huge deal in many cases, as most Strikers have at least some form of self-buffing capability that they can fill in the gaps with, but being left with +4 Attack/+2 Critical Rate without an MP refresh can be a bit awkward at times. Also worth mentioning, and this isn’t an issue per-say so much as a potential wasted bonus, is the fact that Potion is the move that activates Move Gauge Acceleration. This can mean that times will come when you need a Potion but already have Move Gauge Acceleration active or need Move Gauge Acceleration and don’t have significant damage on any units, meaning one of the two bonuses will likely be wasted. Still, with two MP Refresh tiles on their grid, this isn’t likely to end up becoming a huge issue in a lot of builds.

With the 10,000 point Champion Stadium in full swing, swift victory is more important than ever. Fortunately, Sonia & Yamper are here to fully enable many dual-Striker teams, which can then tear apart the opposition.

It’s seriously hard to overstate just how much damage a good dual-striker setup can do, and it can definitely work here. The problem is the fact that most Legendary Arena stages have a very specific gimmick that needs to be addressed (or ignored in some cases), so this may require a specific, non-Striker Sync Pair in the 3rd slot. Still, Sonia & Yamper will handle themselves just fine here thanks to their bulk and utility.

Set up two strikers and go to town. Obviously each stage is going to have its own unique flavor that can make Sonia & Yamper more or less advantageous, but they should be stellar choices in general.

Reliance on skills isn’t a great trait here, so it’s probably best to leave Sonia & Yamper at home. Although their dual MP Refreshes on Potion and passive Speed boosts can make them at least decent.

These are generally the most important tiles on Sonia & Yamper’s grid:

So as should be pretty obvious, Sonia & Yamper really, really want ⅗. That’s where the parts of their kit that makes them really work show up. This is an important consideration, but the fact that they’re entering the general pool makes it a bit more manageable long-term.

Bulky with Defense buffs? Vigilance is always the answer.

Stack two Physical attackers together and go to town. Hilda & Diancie, N & Zekrom, and Leon & Calyrex are all fine examples here. In fact, a combo of Sonia & Yamper, N & Zekrom, and Volkner & Luxray can triple-up Electric Theme Skills and provide stellar damage output that even goes so far as to free up Volkner to utilize Wild Charge for even more damage. Hala & Crabominable are also particularly note-worthy, as Sonia & Yamper can generally fill in the Speed loss due to Ice Hammer as quickly as it’s dropped, making them far less of a strain on the move gauge when combined with their move gauge acceleration effect. And while a bit less supported, Special Attackers can also work in the 3rd slot if they can max out their own Special Attack. Red & Charizard, Leon & Eternatus, and Alder & Volcarona are all great choices here for example, as they all appreciate not having to worry about self-buffing their Critical Rate and can take advantage of Sonia & Yamper’s stellar move gauge management options.

Sonia & Yamper are stellar, but it’s not as clean-cut as a “YES, PULL HERE AND NOW”. When weighing the pros and cons of pulling them, the first consideration has to be their current competition. Leon & Calyrex have some very attractive advantages that make them worthy of consideration, and Cynthia & Giratina have really put Ghost Types on the map due to their combined power and utility. And this isn’t even mentioning the Sync Pairs that January has in store. And while Sonia & Yamper are entering the general pool after this banner, all of their current and foreseeable competition is limited. The second consideration is, plainly put, how much actual advantage you feel they will add. Sync Pairs like the previously mentioned Hilbert & Samurott can rival Sonia & Yamper on a number of fronts (though definitely not all), so going out of your way to pick Sonia & Yamper up may not be super important for some players. But if they do manage to come out on top when weighing these issues, then they will definitely deliver.