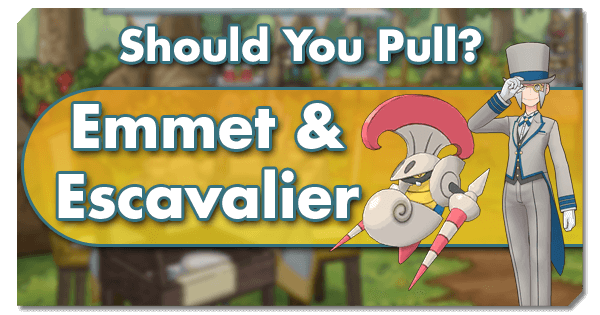 Our Special Costume seasonal event is fcoming to a close, and ushering in its end is Emmet. Alongside his brother Ingo, he has a remarkably appropriate Pokemon, one that makes up something of a Duo with Accelgor; Escavalier. But this is a Bug Type of another breed! While Ingo & Accelgor’s goal is strategy, Emmet & Escavalier are here for one reason and one reason alone: a rush of sheer Bug Type damage!

Emmet & Escavalier have an Attack stat that’s best described as “pretty good”, okay-ish bulk that is balanced between Physical and Special, and Speed that’s middling at best. To capitalize on these stats, their moves start with Megahorn. This Bug-Type move takes four bars and hits particularly hard, though it has a glaring weakness in its 85 base Accuracy. They follow this up with Swords Dance and Iron Defense. These are buffing moves that take 2 Move Gauge bars to activate, but also have no MP limit, making them free-to use. The former grants +2 Attack, while the latter gives +2 Defense. Safety First finishes up the kit, and it grants +2 Accuracy while also giving the Super Effective Up Next effect and the Physical Damage Up Next effect while also setting Move Gauge acceleration at the same time. Yeah, this skill does a lot.

And now we come to Skills. First up is Critical Affliction 9, which grants +1 Critical Rate any time Escavalier or Emmet use a move. This means that Swords Dance, Iron Defense, and Safety First all get a free +1 Critical Rate tacked on post-use. Next is Mighty Affliction 2, which has 30% odds of granting a single stack of the Physical Attack Up Next effect any time Swords Dance or Iron Defense are used, which can help offset the net-damage-loss from their protracted buff time. Finally, Rising Tide is a bit of a monstrous skill that powers up Emmet & Escavalier’s Sync Move damage for all stats that are raised. Yeah, that’s a nice skill for a Striker to have.

All-in-all, Emmet & Escavalier are actually fairly straight-forward. They want to buff up, attack, and drop their Sync Moves just like any old-fashioned Striker. The difference here is the fact that they have a lot of support along the way. Basically everything that they do chains into something else to provide even more power, and the results are pretty impressive. They hit like a truck with Megahorn, and their Sync Move is truly nuclear, especially when you consider the fact that it can also be powered up even more with two additional Sync Nuke effects via their Sync Grid. In the end, a fully buffed, Super-Effective-Up-Next Sync Move coming from this Sync Pair can be an absolute screen-clear on weak stages, and can also be very dangerous on neutral stages as well. And this doesn’t even mention the fact that they’re self-sufficient offensively without needing to use any MP! And on top of that, even their lower speed isn’t a huge issue thanks to Move Gauge Acceleration from Emmet’s Trainer Move. All-in-all, this is a very solidly designed Striker with very real potential to obliterate a lot of stages.

But, on the other hand, they do have the issue of being slow on just about every front. Yes, they have Move Gauge acceleration, but that only lasts so long and isn’t generally going to be enough to fully support a dual-Striker team comp if you want maximum damage output. They’re also pretty slow to buff, needing 3 moves to max their Offensive stats, and 3 more for Defense, which is virtually essential for a powerful Sync Nuke. And that isn’t even mentioning their Trainer Move, which they almost need to use fairly early for its ability to patch up Megahorn’s tendency to miss with +2 Accuracy.

Bug is still a less than easy type to cover due to the lack of powerful attackers within the type, and none of them are Physical, so Emmet & Escavalier are likely to be very useful… when the need for their skills arises. But when they are called upon, the result can be downright devastating.

Defense buffs are nice for Legendary battles, but more important is their high Bug Type damage output. When this weakness appears, Emmet & Escavalier will definitely be an optimal choice. Their neutral damage is also quite high, so they can be useful on general stages of the Gauntlet to help score even more rewards.

Sync Pairs capable of high damage are always useful to have available for Extreme battles, though their Theme Skills aren’t remarkably relevant/uncommon for scoring additional rewards from many of them.

With self-buffing, MP-free Attack buffs, and devastating Sync damage, Emmet & Escavalier are a great option for the Villa. The two issues here will tend to be move gauge management and the base accuracy of Megahorn, the latter of which can easily be rectified through Emmet & Escavalier’s grid.

Emmet & Escavalier are actually pretty useful even at ⅕. While they lack the super-hard-hitting tiles of higher levels and basically get nothing of genuine value from their grid, their basic kit is still strong enough to allow them to power through. However, the biggest loss is definitely in terms of Sync move damage, where they will see a significant drop when compared to higher Sync Move levels with similar setups. ⅕ has about 73% of the Attack damage and 68% of the Sync Move damage when compared to the full ⅗.

⅖ is where we get our first Sync Nuke tile, and access to a few nice bonuses like Megahorn move Gauge Refresh 3 and Sharp Entry 1. Attack damage doesn’t see much of a change when compared to ⅕ minus the marginal move-damage boost that the additional Sync Move level naturally brings, while Sync Nuke damage rises to about 76% of what ⅗ sports.

⅗ is naturally the gold-standard to strive for. With this, Emmet & Escavalier are capable of very good Attack damage, as well as impressive AoE Sync Move damage. This is also where Defense buffs in particular become even more valuable, as they can help out even more on the offensive side of the spectrum.

Note that the above percentages are just rough estimates comparing different outcomes with relevant stat-buffs on community-accepted “good” grids. Actual performance can vary from these estimates due to any number of variables.

Their EX Viability is very high. This is a Sync Pair that can take advantage of the raw stat boosts, and becomes a team-sweeping wrecking ball when given an AoE Sync move. Anyone who pulls for Emmet & Escavalier should definitely consider EXing them at the earliest convenience.

As is pretty much always the case for a damage-dealing Sync Pair, Critical Strike 2 is the best overall choice for its universally useful damage-boosting capabilities. Another option would be Super Powered 3 if you only intend to use Emmet & Escavalier for Bug weak stages.

To start with, Emmet & Escavalier were practically designed to work with Ingo & Accelgor. Between Bug Zone and the buffs useful in their own right and good for powering up Rising Tide, this is a combo that can be downright devastating.

Beyond that, Emmet & Escavalier primarily want help with Move Gauge management and random stat-buffs to supercharge their Sync Move, alongside a bit of help getting Attack and/or Defense maxed a bit faster. Professor Sycamore & Xerneas are prime candidates here, as they can max Speed, Special Defense, and Special Attack with a single Sync Move. When combined with Emmet & Escavalier’s natural buffing capabilities, this combo can easily max all of the main-six stats: Attack, Defense, Special Attack, Special Defense, Speed, and Critical Rate. The problem with this comp is the fact that it naturally pushes Emmett & Escavalier’s Sync Move to the second cycle, though this isn’t terribly difficult to manage. Other options for relevant buffs include Sonia & Yamper, Hilbert & Samurott, Caitlin & Sableye, Falkner & Swellow, and Skyla & Swanna among several others.

If you want to hit for maximum Bug Type move damage and don’t have the previously mentioned Ingo & Accelgor ready to go, then an argument can definitely be made for pairing Emmet & Escavalier with Alder & Volcarona. The combo of Megahorn and Bug-type Hyper Beam will put a tremendous dent in just about anything weak to Bug. Just note that high-grade Move Gauge management will be essential to this pairing, so a partner like Ingo & Excadrill is definitely recommended.

Emmet & Escavalier make for what is arguably the best investment of this year’s Spring event. They sport high damage in an under-represented type and don’t need a whole lot of support to genuinely shine, and so they can pull their own weight in a lot of game modes. We do have a few solid Sync Pairs on the way, but an investment in Emmet & Escavalier is likely to be well rewarded.

We sincerely apologize for the delay on this article, being released close to the end date of the banner. The author had the draft ready ahead of schedule but I failed to schedule a proper timeline for the review and publication that would have been more suitable for the banner's period. We strive for quality above quickness so we are convinced that we should still take the appropriate time to publish our articles in a satisfying state but we will keep working hard to improve the consistency of our scheduling and publication process in the upcoming months to avoid those situations as much as possible. Thanks for your understanding!