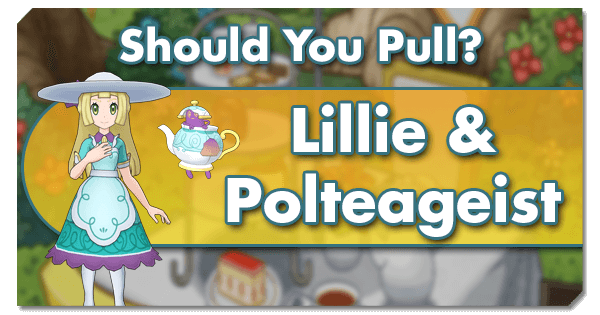 A healing-focused tank with strong offensive buffs and random field effects to back up their capabilities.

Welcome to the Tea Party! Please feel free to sample the plethora of teas on offer, and be sure to let us- OH GOD, NOT THAT ONE! THAT TEA IS ALIVE! …IN A MANNER OF SPEAKING!

Lillie returns to the fray, this time returning to her roots as a Support unit. And at her side is the cute little teapot ghost from the Galar region, Polteageist. Together, they make a very effective tank and Support unit with advantages for Special teams in particular. But just how worthy of your precious gems are they? Let’s break them down.

Lillie & Polteageist have somewhat light bulk for a tank that leans a fair bit towards Special Defense, okay Speed, and offensive stats that don’t really matter. To make use of this stat-line, we have the classical Potion with the expected Sync Grid tiles attached to it. X Sp. Defense All is next, and it’s useful for keeping Lillie & Polteageist and their team alive through select attacks. Next is Astonish, which is objectively one of the best moves that a Support unit can have thanks to its low cost and good base Flinch odds. Finally, we come to It’s Teatime!, which is a 2-use move that offers +2 Special Attack and Gradual Healing for the team, and also sets a random field effect. The effects on offer are the following, with their respective chance  of appearing:

While some people may be excited about the fact that we have a new Ghost Zone setter, this should make it obvious that the odds of hitting that are pretty low overall.

So looking at the kit above, one fact is fairly obvious: this is a healing-centric tank that leans on the Special side of the spectrum, both offensively and defensively. Despite having semi-low base bulk, their ability to boost their own Special Defense and their multiple sources of recovery can make them very hard to take down. And on top of this, they’re a new Special Attack/Critical Rate buffing Support unit, which has become a bit less common recently.

On the other side of this coin, strong Physical attacks can potentially mutilate poor Lillie & Polteageist. Yes, they can potentially recover their way back to health, but a repeated assault can cut them down fairly quickly. This makes them a bit risky defensively-speaking, unless you already know what attacks you’re going to face. The good chances to raise a Physical Damage Reduction barrier via their trainer move definitely helps on this front, but it’s not guaranteed and doesn’t last for too long overall, so it’s hard to rely on. They also are a bit lackluster on the Speed side, and while their grid helps out a bit on that front, the recent push towards hyper-offensive Dual-Striker teams can be a bit hard to pull off with Lillie & Polteageist. They do have a chance to set Move Gauge Acceleration, but that’s only going to come from about one in five skill uses, making it unreliable outside of stage resets.

Beyond this, we also have the potential issue of Ghost Zone being a potential result of Lillie & Polteageist’s trainer move. Yes, this is a powerful and useful effect, it’s got very low odds of actually coming into play, and we only really have two main Sync Pairs that are really capable of using it to maximum effect, Lilie & Lunala and Cynthia & Giratina, but one of them is also Lillie and the other already has Ghost Zone capabilities. This effect can also be devastating on stages that use Ghost Type attacks, and can be an end-runner if the opposition is using physical Ghost Type moves in particular. For these reasons, it’s probably best to just pretend that the 5% chance of calling up Ghost Zone doesn’t actually exist until we get more good Ghost types.

Lopsided tanks can really shine here, as every region to date has at least one Elite 4 member that focuses almost exclusively on either Special or Physical attacks, so Lillie & Polteageist’s low physical Defense can be mitigated if you know what to expect. On that note, randomly setting Ghost Zone on a stage that uses Ghost Type attacks when your team isn’t using Ghost Type attacks can be a serious issue defensively, so some stages may run a bit of risk. That said; they’re actually quite good here.

Despite not being super bulky, strong passive recovery combined with Potion support and potentially great odds of Astonish flinches to temporarily shut down the arena boss can make Lillie & Polteageist pretty hard to take down. Add to that team offensive support, and they are good picks here overall. Just note that random Physical attacks, which just about every stage has, can hurt a lot. On that note; a number of Legendary Arena bosses like Uxie have physical Sync Moves despite what some might expect.

Solid healing alone makes Lillie & Polteageist solid for tanking on most stages, but their viability really depends on how well they will fill the stage’s gimmick in many stages.

Free Critical Rate boosts when attacking plus dual-passive-heals and one-bar flinching capabilities can make Lillie & Polteageist stellar in the Villa! If you’re struggling with this game mode, then a mix of Lillie & Polteageist, Professor Sycamore & Xerneas, and almost any Special attacker could be a single-day-clear team. Just watch out for Sawyer’s Honchkrow and its Giga Impact, as well as other Physical attackers along the way..

At ⅕, Lillie & Polteageist are perfectly fine. They’re largely a run-of-the-mill healing Support unit with offensive buffing capabilities. Their grid doesn’t give them much, but their base kit is solid enough to warrant some use.

⅖ mainly gives additional Potion utility, but that’s about it. While this can be very useful, stopping at ⅖ isn’t extremely useful, so it might be better to settle for ⅕ or make the full investment to ⅗.

⅗ is where the whole kit really shines. Full buffs on Special Attack and Critical Rate, even stronger healing, and great odds of straight-up canceling the enemy’s next move with Astonish make this an investment worth going for. While the resource cost can be great, Lillie & Polteageist will definitely pay it back at this level.

While they may not have any unique Sync-related effects, Lillie & Polteageist still have a few basic reasons to consider making the investment to unlock their EX form. Since their natural bulk isn’t exceptional, the relative gains from the sheer stats will be more pronounced, and they also enjoy higher recovery from their various sources due to having a higher base HP to work with. On top of this, the Support EX Sync Buff is always worthy of consideration, meaning Lillie & Polteageist may not be the best candidates, but they will be able to make good use of being EX unlocked.

Vigilance is generally the Lucky Skill of choice, as it protects Lillie & Polteageist from added damage and keeps Critical hits from bypassing their Special Defense boosts. However, the Deluxe pool also has a number of worthwhile options to consider as well. Head Start 1 and Adrenaline 1 are becoming steadily more valuable as more and more Sync Pairs bring new ways of reducing the Sync Move counter to the table, and they also synergize fantastically well with the flinches that Astonish brings to the table. Sentry Entry 2 is also worth considering, as it makes Lillie & Polteageist better at tanking Physical moves, and Mind Games 2 has particularly strong synergy as well due to Lillie & Polteageist’s strong pairing with Special attackers and focus on attacking with Astonish.

Special attackers are the main benefactors to Lillie & Polteageist’s Special Attack and Critical Rate boosting skills. Stand-out candidates include Sygna Suit Leaf & Venusaur, Sygna Suit Cyrus & Darkrai, Giovanni & Mewtwo, Ghetsis & Kyurem, or literally any other Special attacker that can’t self-max their offensive output. Other offensive Sync Pairs with buffing team capabilities like Anniversary May & Latias or Anniversary Skyla & Tornadus also work well for giving the main attacker as much support as possible. The ability to score semi-reliable Flinches is also great for Sync pairs that can capitalize on them, like Blue & Pidgeot or Lysandre & Yveltal. Beyond this… they’re just useful in general, and can fit on a lot of teams that don’t really care about supportive buffs thanks to their healing capabilities.

If you don’t mind rolling the dice or resetting for it, then the ability to set Ghost Zone can be useful… but not for everyone, as we’ve already discussed. Alister & Gengar, Fantia & Mismagius, and the previously mentioned Giovanni & Mewtwo are arguably the Sync Pairs that are able to take the most advantage of this.

While a bit lackluster, Lillie & Polteageist are great for filling the role of a generalist Special support. They have a lot of healing capabilities to support their bulk, great buffing capabilities, and even a bit of Tech-like potential with Flinch. They’re a solid choice for anyone who finds themselves wishing that they had more tanky Support units on their team. However, their return on investment isn’t huge in general, so it’s worth considering waiting for a better Support unit in the future. For example; players who pulled for Jasmine & Celesteela a few months ago can probably skip this one, as there is a lot of overlap in what exactly they want to do. Still, this isn’t a bad Sync Pair to pull for, and they can definitely pull their own weight.