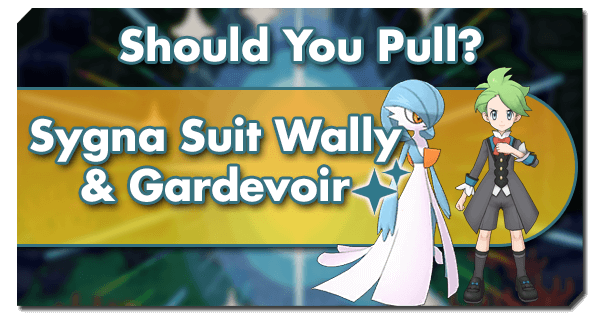 A strong, supportive Tech unit with the ability to greatly power up Fairy Type attacks, debilitate the opposing team with debuffs, and even throw out powerful Sync Nukes.

It’s been a while, hasn’t it? Wally came to Pasio alongside his Gallade quite some time ago now, and he’s been largely quiet ever since. Sure, he shows up in battles every now and again, but he hasn’t made waves in a long time. Well, now it’s time for our boy with the fire theme song to overcome his shyness and step into the light again, and this time he’s coming to us with an old-fashioned reference! Back when Ruby/Sapphire/Emerald dropped, Wally actually used a Gardevoir, as Gallade didn’t exist until Generation 4. That was retconned back in Alpha Sapphire and Omega Ruby, but the origins are still here. However, the fact that Wally is paired with a shiny Gardevoir is also interesting! Way back on the GBA games, it was actually possible (though extremely rare) for Wally to encounter a shiny Ralts during his catch-tutorial! However, the game would then proceed to turn said ralts normal in gameplay, so it was impossible for Wally to actually use a shiny Ralts/Kirlia/Gardevoir in the game. Still, it feels like this may be a bit of a reference to that infamous rarity! But enough lore/history, what exactly can Sygna Suit Wally & Gardevoir do now that they’re here on Pasio?

Wally & Gardevoir constitute a Fairy Type Tech unit. They have high Special Attack, low Speed, and decent bulk that’s largely balanced. This is also a Mega Evolution Sync pair which gains some Special Defense post-Mega, as well as a Special Attack boost that instantly becomes the single highest base Special Attack stat in the game. For moves, we begin with Disarming Voice, which is… a bit underwhelming, in truth. It’s a 2-bar Fairy Type move that hits all opponents and never misses, but it doesn’t pack much base power. Next is arguably the crown-jewel of Wally & Gardevoir’s set, with Fairy Wish. As basically everyone should be familiar with at this point, Fairy Wish sets Fairy Zone on the field, boosting Fairy Type damage while active. This is followed by I Won’t Fall Behind!, which is a fairly simple Trainer Move that grants +2 Special Attack and Special Defense as well as +1 Critical Rate at 2 uses per battle. Next is a bit of a unique one in B Dazzling Gleam. Like what we’ve just recently seen with the Anniversary units, this is a Buddy Move that can only be used when a specific requirement has been achieved in battle. In this case, Mega Evolving an allied Sync Pair, including Gardevoir itself! Once that’s done, this is an attack that hits all opponents and reduces Attack and Special Attack by 4, instantly crippling the entire enemy team offensively. But that’s not all, as this move also activates a brand new debuff called Fairy Type Rebuff. This stat can range from +3 to -3 like Critical Rate, and it respectively reduces or increases damage taken from a given type when activated. In this case, the opposing team will be inflicted with -1 Fairy Type Rebuff and start taking even more damage from Fairy Type attacks as a result. Finally, we come to Wally & Gardevoir’s Sync Move; Take On the World Dazzling Gleam. On use, this Sync Move transforms Gardevoir into Mega Gardevoir, but it also suffers from the traditional low base power that we’ve come to expect from Mega Evolution Sync Moves. Fortunately, this drawback is mitigated somewhat by a built-in Sync Move multiplier while Fairy Zone is active and can be helped out even more via their grid, so it has the potential to hit good numbers when set up properly.

So when we put all of these components together, what exactly can Wally & Gardevoir do? For starters, this is an ideal partner for any Fairy Type damage dealer. Between Fairy Zone and the new Fairy Type Rebuff effect, they can raise this languishing type to new heights fairly easily. This is also a Sync Pair with a solid focus on team support, as they’re able to tick down the Sync Move counter at the start of the battle and post-Mega, buff the team’s Speed passively, drop the opposing team’s Attack and Special Attack by unprecedented numbers with a single move use, and even keep the entire enemy team confused throughout the battle fairly easily. In particular, the Speed buffs that Wally & Gardevoir offer can take pressure off of the team’s Support unit, allowing for a much more complete Striker/Support combo that can focus on sheer damage output rather than needing to spend too much time worrying about the Move Gauge bar. And to top this all off, they can even achieve fairly impressive Sync Move numbers post-Mega with the help of their grid and EX boost, allowing them to potentially delete the center with a bit of proper setup. This is one of those Sync Pairs that looks like it’s designed to work strictly with a very specific team setup, but can actually work surprisingly well with just about any team.

However, this is also a Sync pair that has very disappointing attack damage, overall. Despite having the single highest base Special Attack stat in the game post-Mega, access to Fairy Zone, the Fairy Type Rebuff effect, and boosting effects on their grid, Disarming Voice is still only Disarming Voice, and while this plethora of effects provide huge buffs, Wally & Gardevoir’s move damage isn’t going to win any awards. Wally & Gardevoir can also be a bit awkward when it comes to fitting on some teams, as they really want themselves or someone to Mega Evolve in order to gain access to their Buddy Move, and generally need to get to their second Sync Move to deal really good Sync damage. This is a bit of a problem for teams that might feature too much Sync competition without including Mega-Evolution, but it's not the biggest issue all-in-all as the current premier Fairy Type Striker unit in the game, Diantha & Gardevoir, already wants to Mega Evolve ASAP for instance.

To start with; many people may be a bit apprehensive at the prospect of a unit with a Sync Grid that goes clear up to 5/5. However, it’s really not quite as bad as some may think in this case. While ⅘ is where Wally & Gardevoir arguably get everything that they really want out of their grid as that’s where Head Start 1 becomes available, this isn’t a case of an absolute necessity.

As is fairly normal, ⅗ is the realistic goal here, as this is where Wally & Gardevoir can chip away at Special Defense with Mind Boggler 9 and deal potentially great Sync Move damage with Interference Sync 5 and Devastation. ⅖ is another decent goal, as Team Speedy Entry 1 can ensure a full +6 Speed for the entire team while Whimsical Acceleration makes the Move Gauge even less of an issue. ⅕ is really just their base kit with a few additional boosts, though their base kit is perfectly good as-is.

When their Grid is brought into the equation, Wally & Gardevoir have the potential to be very disruptive for their opponents and supportive for their team at the same time. While they can work wonders on Fairy-weak stages, they’re also great just about anywhere and can likely find a place to shine on any given week.

Stat drops persist between HP bars, so Wally & Gardevoir can potentially cripple many stages early-on and then force the boss to continue dealing with it until the end. Their access to easy Confusion can also be handy on select stages, as it can be a part of some gimmicks.

Wally & Gardevoir are just fine here, especially when they happen to line up with the stage’s gimmick. They’re not must-have, especially since the Hoenn theme skill is already pretty easy to fill with other units, but they’re still really nice overall.

Access to passive team-wide Speed boosts can be very handy for many Sync Pairs that like to tackle the Battle Villa, though they don’t have much else that makes them truly shine here. They’re better than nothing, but not exactly outstanding.

Wally & Gardevoir are definitely some of the highlights for late September/October. They have high general utility that can seriously help out their team. And while they’re great for Fairy Type teams now, they also may become a big part of a powerful Team Comp down the line if we end up getting more powerful Fairy Type attackers later.

As-is, they’re definitely worth the investment needed to add them to your team, but they do have some major competition in the ongoing 3rd Anniversary Master Fairs, as well as some potentially useful Sync Pairs slated for October. Think before you pull, but rest assured that Wally & Gardevoir will pay back your investment.