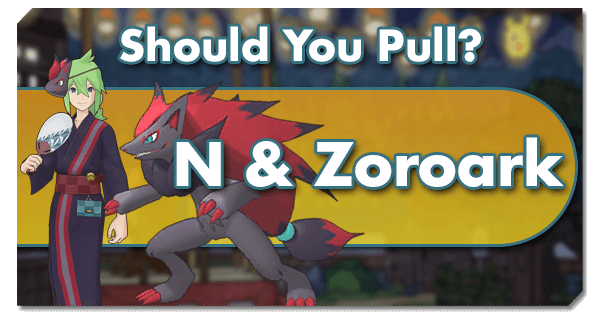 Welcome to the Summer Festival! Always an interesting seasonal period, this year we’ve got another duo of units ready to take the field, but for today we’re going to look at one in particular. Traditionally, N has always managed to make some waves when signing up a new Sync Pair on Pasio, and this time is no different. Paired up with Zoroark, the would-be King is now poised to rule the Dark Type meta for a time, so let’s find out just what exactly hides in the dark as we look past the illusion and into what N & Zoroark have to offer.

To start with, N & Zoroark hit the ground running with a very strong Special Attack stat and a high Speed stat, both of which are great for any offensive Sync Pair. As payment for this advantage, their bulk is on the low side to compensate. Zoroark’s signature move, Night Daze, starts the list of moves. It’s a 95% accuracy Dark Type attack that costs 4 bars, has okay base power, and has 50% odds of dropping the target’s Accuracy by 1 stage on use. This follows up with Snarl, which we’ve seen several times in the past. It’s not very strong on its own, but the ability to hit the entire enemy team and drop their Special Attack is always appreciated. Dire Hit + is next, and is always great to have for its ability to easily max out Critical Rate in just 2 uses. Finally, Vivid Illusion finishes the move list as a 1-time-use skill that grants a whopping +6 Special Attack and +2 Evasion, taking care of most of N & Zoroark’s buffing needs in one single move use.

So when we put all of these variables together, what do we get? The new best Dark Type attacker in the game, in overall terms. N & Zoroark hit very hard, and they’re also pretty straight-forward. It takes three turns of quick setup, and they’re ready to go to town on whatever enemies they may be facing. The main variables come from their Grid, which can offer fairly large boosts when the opposing team is inflicted with Accuracy/Special Attack drops, both of which N & Zoroark are capable of delivering themselves.

With the good comes the bad, so what exactly is wrong with N & Zoroark? For starters, while they are capable of dropping Accuracy/Special Attack for their grid-based steroids, they’re definitely not good at it. Turns spent using Snarl are turns not spent attacking with Night Daze for maximum damage. And trying to stockpile Accuracy Drops with Night Daze is pretty inefficient due to its middling 40% odds of actually taking effect.

Dark is a type that is still a little bit under-represented, so having a new, powerful Dark Type attacker available can be very useful for many players who struggle when this weakness rears its head in a given week.

High single-target Dark Type damage compounded with Accuracy drops and Special Attack drops can make N & Zoroark an optimal choice on relevant Legendary Arena stages, assuming that they can fit on a team that can also work around whatever gimmick the boss may have.

While they prefer to prey on a Dark Type weakness, N & Zoroark tend to be perfectly fine in most general challenge stages thanks to their solid all-around performance. That said, they probably won’t excel if it’s a stage that gives a 5x bonus to a specific class of Trainer if they aren’t actually a part of whatever that class may be.

N & Zoroark can handle themselves well in the Villa, but only if you don’t mind fishing for an MP Refresh on their trainer move. Without that, they’re pretty mediocre.

The majority of N & Zoroark’s offensive power is locked behind ⅗, so that should definitely be the priority if you intend to pull on this banner. While their base kit alone is still solid, ⅕ and ⅖ don’t offer much additional Sync Grid utility, sadly.

When it comes to investing in an EX boost, this is definitely a Sync Pair worthy of the cost. N & Zoroark have access to a few Sync Grid tiles that boost their Sync Move damage significantly, and turning that Sync Move into an AoE move is definitely worthwhile.

As always, Critical Strike 2 is the gold-standard move for its universal boost. The other top option is Super Powered 3 for its superior damage-boost when attacking a Dark Weak stage. It’s also substantially better on N & Zoroark than many other Sync Pairs, as they already make use of the Super Effective Up Next effect, which means that they already want to fight Dark weak stages first and foremost.

The top partner for N & Zoroark has to be Sygna Suit Cyrus & Darkrai. The sheer power of Dark Zone raises Zoroark’s damage to new heights, while Darkai’s Dark Void makes many stages virtually non-issues thanks to constant sleep. Add to that the fact that Cyrus & Darkrai can drop the opposing team’s Accuracy and Special Attack with a little luck, and you’ve got a pairing that is genuinely dangerous.

Another option for compounding Dark Type damage is Marnie & Morpeko, as their Power Trip can hit extremely hard and is very cheap gauge-wise. Just note that their viability will depend on the Support that they’re paired with, as they want Critical Rate boosts as well as literally any other stats that they can garner.

If you’re running Devastation, then help dropping Special Attack is going to be appreciated. Champion Iris & Hydreigon, Bede & Hatterene, and Classic Elesa & Emolga are all examples of Sync Pairs that can do this job with various other benefits on the side.

Red & Snorlax also make great partners on the Support aisw, as it’s nearly impossible to save a naturally-occuring Super Effective Up Next effect to boost Sync Move damage given optimal play. Finally, Ingo & Excadrill deserve special mention, as they can help N & Zoroark out with Critical Rate buffs, can provide Free Move Next support, can buff the team’s Speed, and can even compound Accuracy drops with Mud-Slap.

A strong attacker for an under-represented type, N & Zoroark are definitely worth adding to your team. They have the potential to hit like a truck and cover a less-represented type beautifully. Their damage output is genuinely phenomenal when setup properly, but just be ready to deal with the fickle requirements to hit those numbers on their grid. Overall, N & Zoroark are genuinely great and very strong in the current state of the game.