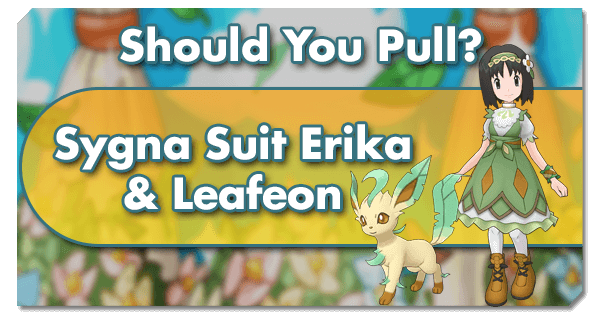 Sun cores finally have their MPR Sunny Day setter! As an enabler, Passive Skills like Solar Propulsion 2 and Speeding Sun 3 are fantastic for grinding out Sync Moves, whether it be from Leafeon itself or another teammate.

A list of the important nodes on Sygna Suit Erika’s Sync Grid is listed below:

As a damage dealer, Leafeon is highly self-sufficient, capable of maxing its own Critical Hit Rate and Attack (in 3 moves). Its Sync Grid extends this further, with Solar Blade Fast Track 9 filling in the gap left by X Speed. These then feed into Inertia and Ramming Speed for even more damage multipliers. Top this up with Super Infliction 9, and Leafeon is suddenly threatening a maximum power Tech Sync Nuke right from the start.

Solar Blade being its only damaging move is a source of concern. Fortunately, Leafeon sets up the Sun necessary to skip the charging turn on its own, so as long as players manage the duration of Sun well, this should not be too big of an issue. This is also where that aforementioned MPR on Sunny Day comes in handy when it comes to longer matches where two regular waves of Sun isn’t enough, or when the opponent intends to start a Weather War.

Its true problem lies in its mediocre Base Attack (only 224 at Level 140), which is a huge shame that keeps Leafeon from running away with its fantastic set of multipliers. Sunny Day MPR is shackled behind one duplicate, while its best assets require one more to unlock. Fortunately, Leafeon at 1/5 is still very much usable either as a stand-in or alongside Brendan’s Sceptile or other Sun abusers.

Sunny Day MPR alone makes Sygna Suit Erika an asset in Battle Villa and/or longer formats like the Legendary Arena and Full Force Battles. However, it is very clear that, as a Sync Nuke, Leafeon’s strengths lie in short battles like the Champion Stadium, where its boosted Sync is hopefully enough to secure the KO on the boss.

This Sync Grid build runs Leafeon as a DPS option to use even against regular stages.

This Sync Grid build is tailored for maximizing Leafeon’s damage output on its Sync Nuke.

As a Sun setter, Sygna Suit Erika works alongside any Fire Type and or Grass Type unit that have Sun based nodes on their Sync Grid. A quick Kanto based core would include Sygna Suit Red and Sygna Suit Leaf, though this does mean utilizing Mega Venusaur as the team’s damage sponge.

As a Sync Nuke option, Leafeon’s best partner is actually Meganium. The ideal move order between the two would be: X Speed > Dire Hit All > Sunny Day > Sunny Side Up > Soak Up The Sun > Sunny Side Up. At the end of this chain, Leafeon will have maxed out its Critical Hit Rate, Attack, and Speed, enabling a devastating Sync Nuke. This also leaves Leafeon with at least one use each of its Status Moves so as to reapply Super Infliction 9. When Sun runs out and MPR has been exhausted, Meganium can then take over Sync responsibility to reapply Sun.

Other good teammate options to consider include, but are not limited to: Brendan’s Sceptile (another self sufficient unit for a hyper offensive core), Groudon’s Maxie (extended Sun, start with Sun, plus Attack boosting Master Skill), or Kiawe’s Alolan Marowak (Potion Master Healer and Defense lowering with Shadow Bone).

An undoubtedly fantastic unit that provides a long awaited asset in Sunny Day MPR. Most of its drawbacks are manageable, too. However, the fact that Sygna Suit Erika isn’t a Poke-Fair severely cuts into her pull urgency, since players can still get her (albeit at a much lower rate) after her banner has ended, and/or through the Kanto Ticket Scout when she eventually gets added to the pool. With her debut banner stuck between Classic Red and the Fall 2021 season, players aren’t hard pressed to pull for her against those “better” options.