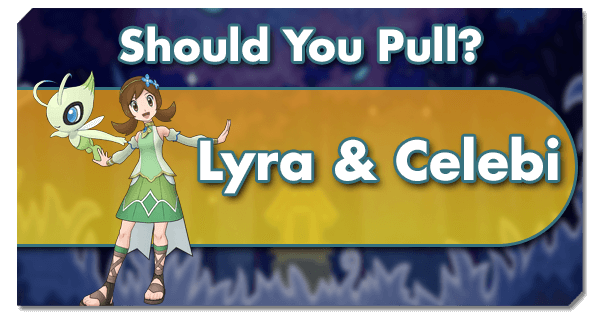 A Tech Master Fair that combines the qualities of Supports and Strikers for a single, very complete kit.

Coming back after being one of the first Spotlights and Seasonals added to the game, Sygna Suit Lyra joins the select group of Master Fairs - but more than that, the long-waited Grassy Terrain finally makes its playable debut! Ever since the Tapu Bulu Legendary Arena, players have been waiting for a Sync Pair that’s capable of summoning it themselves. We already knew that Grass had a good roster of possible users to abuse Grassy Terrain, but we didn’t have access to it ourselves. So how does SS Lyra work in practice? Let’s find out!

Celebi’s stats are good. Although it’s not insane, 636 HP with 190 defenses means it’ll be able to take common hits just fine, granted it’s not the main tank. 336 Speed is good for the gauge too, even if SS Lyra won’t be carrying it by herself. And while 332 Attack is a bit on the lower side, it’s in the common range for a Tech unit, while 420 Special Attack is actually quite high. For her moves, SS Lyra starts with Grassy Glide: it follows the standard 100 BP, 100% accuray, 3 gauges for moves, but it has a secondary effect of not costing move gauge while Grassy Terrain is up. This is great for quad queues and just making her gauge more manageable in general. Next, Dire Hit All + is something often seen on supports, so having the capability of maxing crit for the entire team on this kind of unit is very welcome. The second Pokémon move is Grassy Terrain - as imagined, it simply summons the field effect of the same name. On top of boosting Grass-type moves, Grassy Terrain also makes Grass moves restore the user’s HP a bit after it attacks. Finally, her Trainer Move is called Voice of the Forest!, a clone of Palentines Dawn’s TM, boosting Attack and Special Attack by 2 stages for one ally and giving it regeneration. This makes SS Lyra actually capable of covering both offenses and critical hit rate for a unit on her team like a real Support unit, but it can be a bit slow, so it’s recommended that she gets at least some help rather than trying to fully buff a unit alone (especially as her Trainer Move is single target, so boosting an ally means SS Lyra will lack the buffs herself).

As for the passives, SS Lyra got Johto Pride - the standard Pride Master Passive that boosts physical Attack and Defense and gets stronger for every Johto unit on the team. Johto’s supportive roster is quite strong, and they have some strong Strikers too, so this can easily get further boosts. Hassling Hit 9 guarantees flinch, confusion, and trap every time Celebi uses an attack move, all at the same time. The flinch, in particular, is very valuable for turn skips and avoiding key strong attacks from enemies like Hyper Beam and can even allow for no damage runs if played correctly. Ruthless 9 is next, and it debuffs a random stat from the enemy by two stages, essentially a stronger Unfortuitous 9. This can help units with Power Play and Power Loving, and while it may lose value against multiple enemies as Lyra only has single target attacks, the drops can snowball against Legendary Arenas in particular. Finally, Turbo Turf 2 is straight to the point: the gauge will recharge faster when Grassy Terrain is up.

As we can see, while SS Lyra has mixed capabilities, she has a bit more of an affinity for the supportive side of her overall kit. Her DPS isn’t bad, but not too noteworthy either, and requires a setup on the opponent. Meanwhile, SS Lyra’s buffs are comparable to Falkner, an actual support, although the fact that her Atk and SpA buffs are single target rather than AoE further increases her tendency to the supportive side, as Celebi will lack the buffs for itself if it’s giving them for a partner. Finally, Grassy Terrain and 100% flinch makes SS Lyra totally capable of being a very valuable partner for other Sync Pairs without ever actually bothering to do damage herself.

In this mode, SS Lyra’s flinch can shine - by doing a turn 1 Grassy Glide, you can essentially get your own Sync Move one turn earlier, and the multiple opponents means you can do flinch chains (especially as no Master Mode parameter gives immunity to flinch, unlike sleep). Her DPS will be hard to set up against multiple opponents, so the supportive role is recommended especially since Grassy Terrain has great Sync Nukers, like SC Sonia and SS Erika.

In Legendary Arena, Lyra’s performance can vary from stage to stage. For the earlier arenas, it’s rare to see flinch immunity - this means that you can simply click Grassy Glide and the opponent simply will not move. From Regirock onwards, Legendary Arenas tend to eventually get Unflappable after a few flinches, which can limit SS Lyra a bit, but her other qualities still shine: a single opponent with a big life bar means that she can more easily set up her multipliers for both DPS and Sync on top of her debuffs shining the most here, filling a bit more of an offensive role compared to other modes.

Grassy Terrain, offensive buffs, and flinch all make for a combination that’s useful for pretty much every battle, even off-region. Extreme Battles have Resilience, but since Lyra’s flinches are single target, they can still be timed to make the best use out of it. If Lyra is a boosted unit, she’s a perfectly fine damage dealer too.

A sure flinch surely can be useful for Battle Villa, but its 3 gauge cost might be too much for a mode where gauge support is a lot more limited (and Grassy Terrain won’t be summonable every battle), especially compared to pairs like Elio, who has up to a 90% chance to sleep rather than 100% but only uses one gauge. Outside of that, SS Lyra doesn’t have anything to separate herself from the others in the Battle Villa.

SS Lyra’s base kit is largely what makes her good, so she doesn’t have any must take nodes on her grid, making them more QoL passives.

SS Lyra is entirely reliant on her base kit, so ⅕ is perfectly acceptable. While ⅖ and especially ⅗ have some good nodes, they aren’t key to Lyra’s usage, so it’s recommended to only go for it if you have spare gems.

SS Lyra has a good enough Sync Nuke with just her innate multiplier, so EX isn’t a bad option, but Grass has quite a few options for Sync Nukers, so it’s not a priority either.

SS Lyra doesn’t have a standout Lucky Skill, but Critical Strike 2 works as a generic option. Alternatively, Head Start 1 and Vigilance can also be used, but CS2 will remain as the most useful one in generic situations.

As a Grassy Terrain setter, it’s only natural to pair SS Lyra with Grass-type damage dealers. Maxie & Groudon, Silver & Ho-Oh, Sygna Suit Leaf & Venusaur, Brendan & Sceptile, Mallow & Tsareena, Selene & Decidueye, and Gardenia & Roserade all have Grass moves with varying power, setup, and accessibility, but the two pairs that shine the most here are for sure Special Costume Sonia & Tsareena and Sygna Suit Erika & Leafeon. These two are physical Grass-type Sync Pairs with low Attack, meaning they get a huge boost from Johto Pride, Grass Theme Skills, and Grassy Terrain, alongside having easy setups and a huge damage output.

Sygna Suit Morty & Ho-Oh is an excellent option to support Lyra & Celebi, covering for crit and Speed buffs, being an excellent tank, summoning Sunny Day that is surprisingly useful on many Grass-type kits, and being a Johto pair on top of all of this. For the special partners, Special Costume Jasmine & Celesteela and Sygna Suit Kris & Suicune also combine very well their buffs alongside still giving more Johto Pride boost to Lyra herself, allowing her to skip Dire Hit All + turns. Finally, SS Lyra can be used to set up more niche multipliers, like Harry for Lisia & Altaria and Blue & Pidgeot.

As a unique Tech Sync Pair that brings a new field effect and applies multiple interferences, Sygna Suit Lyra is a unit that can be used on almost any battle and enables others to reach heights otherwise impossible for them, making for a very strong pull!