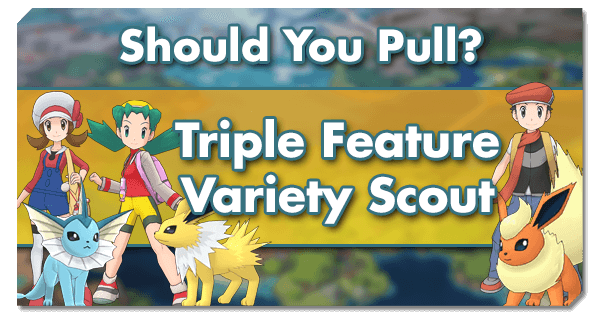 A trio of Tech units on one banner that share a similar root of Field Effect/Sync Nuke capabilities alongside supportive functions to help the team in various ways.

Three limited Sync Pairs that, while not meta defining, can still offer a decent niche and have good rates to compensate possible smaller investments.

What Do They Do?

They’ve come far and done much in their time. Three protagonists that have trained hard and traveled a great distance from their homes, and now they meet on Pasio, each now wielding a different elemental aspect of the same evolutionary basis. They’ve worked together before, and now they meet again; Kris, Lyra, and Etha-....Lucas. Wait, what? Was Ethan busy or something? Oh well, despite the importance of the original Eeveelution Trio to the Johto region, it seems that Lucas is filling in the third spot. This group consisting of ⅔ Johto and ⅓ Sinnoh is here to celebrate Eevee and its various Evolutions, and they’re ready to show just what they can do.

Overall, these three run the same kit with a unique flavor to each. All three have an AoE attack, a status-move, a one-bar move to keep the Sync Move counter running while enacting minimum move Bar cost, and a trainer move with some degree of team-utility. Lucas & Flareon have Heat Wave, Wil-O-Wisp, Ember, and Let Me Teach You for +1 Critical Rate to Flareon and +2 Special Attack to the entire team on use. Kris & Jolteon  have Discharge, Thunder Wave, Thunder Shock, Reviewed and Ready! For +2 Special Attack to Kris & Jolteon, and +1 Critical Rate to the whole team. Finally, Lyra & Vaporeon break the mold slightly due to Water lacking a signature Status Effect. In this case, we have Muddy Water, Fake Tears, Water Gun, and Come Along! to raise Vaporeon’s Special Attack by 2 and the entire team’s Speed by 2 as well.

While extremely similar in nature, the actual utility of these three varies greatly as they’re each designed to support a different team archetype, in particular their own matching types. This is largely due to the jewels of their kits in the ability to set different boosting Field Effects reliably with a Sync. Outside of Type boosting, they all also bring unique utility to the table that can be useful based on the stage and team, as they all have unique team-wide boosts, Field Effect protection, and status/stat-dropping capabilities. These effects make them potentially useful even outside of Field-Effect-centric strategies, though they tend to come up a bit short on that front. The other issue with this trio is the fact that they basically need to Sync early and often in order to give all that they have to offer, and Sync Moves are a very valuable resource that can’t always be spared easily. It’s important to weigh the value of Field Effects against a potentially even stronger or AoE Sync Nuke from another unit, or even a Support Sync for the coveted EX Sync Buff. Not all teams will find this trade-off to be worth the cost.

How To Use Them?

Similar to their base kits, their Sync Grids have essentially the same theme even if they're not directly clones. ⅖ is ideal for those looking at a higher DPS: they all get a 50% multiplier based on the field they summon alongside another multiplier based on their utility move (50% for Lucas and Kris with burn and paralysis, respectively, while Lyra gets Brainteaser, which scales with Sp. Def drops) - the healing passive for their respective field effect is also available, although only at 1.

⅗, meanwhile, brings more versatility to their kits: first, they get a debuffing passive that works for both their moves and Sync Moves: Kris debuffs Special Attack, Lyra debuffs Attack, and Lucas debuffs Sp. Def - Lucas, in particular, greatly benefits from this, as a lot of sun strikers that can be paired with him are also special. They also get a level 3 gauge acceleration passive for their field effect to help out with gauge, but what this change the most is their sync: Brainpower is available to all of them and already makes their sync a lot more powerful, but they also get more Sync multipliers, with Lucas and Kris having a 50% for their field effect and their status while Lyra gets it on a single node via Smarty-Pants. Finally, they have other universal Sync nodes in Adrenaline 1, Synchro Healing 1, and Rejuvenate 6, although those nodes tend to be left on the sides for their more powerful ones.

Sadly, the trio doesn't have EX available to them, but don't worry - as mentioned before, not only they have their innate Sync multiplier, but their Sync Grid also gifts them a total of a 3x Sync multiplier when they're all activated, making for a uncommon case where they're not only viable, but straight up good Sync Nukers despite the lack of the EX boost.

As for Lucky Skills, Critical Strike 2 can be used for all of them, although Lucas and Lyra can make use of Weathered Warrior 3 if preferred due to their passives. Alternatively, if going for a more utility based approach, a debuffing passive could work, such as Mind Games 2 to combo with their AoE moves, although the extra damage tends to be more reliable.

As expected, they also have similar strengths and viability for most game modes. In 3v3s, their field effect summoning, DPS, and AoE debuffs will prove useful - just keep in mind that, in order to make full use of their Sync Nukes, they would need either an auxiliary field effect setter or a Sync accelerator. This goes for most battles, but Extreme Battles might be more favorable to them than Master Mode when applicable as the longer nature of the battles makes their field resummoning and debuffs have a bigger weight overall.

The mode they stand out the most, however, is Legendary Gauntlet. What's essentially a permanent field effect is an amazing tool for this mode, which also tends to have enemies vulnerable to status and debuffs, and to top it off, a single enemy means that their DPS won't suffer the AoE reduction and get surprisingly high numbers if focused on

This is where the three truly differentiate between themselves, as their types and field effects give them clear partnering options that are not shared with others.

Starting with Lucas, Sun units will naturally fit here: Sygna Suit Morty & Ho-Oh perfectly finishes Lucas’s buffing profile not only for himself, but for the entire team, as they both complement each other’s SpA and crit buffs, while also summoning sun and offering a tank. As for offensive partners, Leon & Charizard, Sygna Suit Red & Mega Charizard X, Silver & Ho-Oh, Sygna Suit Hilda & Victini, and Blue & Arcanine are all Fire-types with special moves that can benefit from Lucas’ kit - the first two, in particular, can also double down as Special Nukers. As for budget options, Player & Torchic and Marley & Arcanine can work for finishing Lucas’ buffs and activating Fire theme skills, while Flint & Infernape can be used in case you don’t want to waste your stronger Strikers early on a Legendary Gauntlet run, for example.

As for Kris, Electric-types will be our aim here: Sygna Suit Red (Thunderbolt) & Pikachu is, by far, her best partner, forming a nasty duo with strong AoE damage and multiple debuffs, especially as Kris can paralyze the opponents for Red without having him waste his Gigantamax, but Elesa (Classic) & Emolga and Volkner & Luxray can also be used for getting on-terrain Sync Nukes. For the more offensive options, Ash & Pikachu, Volkner (New Year's 2022) & Electivire, Elesa & Zebstrika, and N & Zekrom are the strongest strikers and they all have paralysis multipliers enabled by Kris - in case you don’t have that many N copies or you’re using Volkner or Elesa, Kris’ crit buffs will also prove useful. Hau & Raichu and Sophocles & Golem can also be chosen as cheaper options.

Finally, Lyra will appear on Rain teams, and as such, Sygna Suit Kris & Suicune is one of the easiest choices one could make, seeing as Kris can not only buff Special Strikers, but even gives them Special Move Up Next, pairing greatly with Lyra’s Fake Tears. Archie & Kyogre, Gloria (Dojo Uniform) & Urshifu, Cyrus & Palkia, May & Swampert, and Gloria (Summer 2021) & Inteleon are all great Water damage dealers that offer their own benefits to the team, like summoning/extending the Rain duration, have an AoE Sync Nuke, or even just having strong DPS that's easy to set up. Sync Pairs like Nessa & Drednaw, Kris & Feraligatr, and Barry & Empoleon are perfectly fine options and also more accessible than most of them. Finally, Smarty-Pants and Brainteaser pairs could sometimes be used with Lyra even if they're not rain units in case you don't have the stronger Sp Def debuffing units, such as Giovanni & Mega Mewtwo Y and Burgh & Leavanny.

Are They Worth Pulling?

Although some people were disappointed by new units that didn't offer new outfits or even a EX boost, the fan favorite Eeveelutions surely prove themselves as very competent Sync Pairs. The Variety banner hasn't been a thing before, so we don't know if they'll rerun often or not, but although they can't match the best units of this month, being a triple banner could offer some consideration due to higher chances of getting something with less investment.