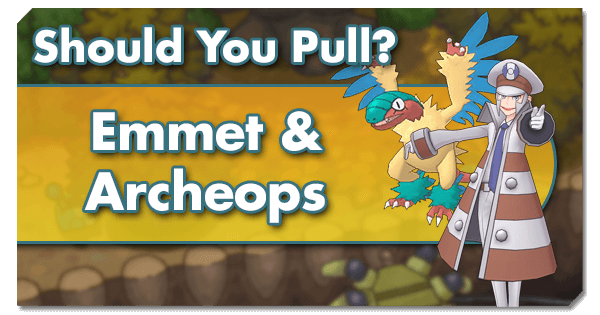 As a Poké Fair unit, Emmet should be considered a more powerful unit than Olivia, with the more efficient self-maximization of Archeops’ Attack and Critical Hit rate, as well as the Hit the Gas 5 Passive Skill first seen on Diantha’s Mega Gardevoir. This gives Archeops insane firepower, even if it does end up being costly on the Move Gauge.

Defeatist (from the main games) was also implemented in a more manageable form, where Archeops gains an additional 50% attack boost while above 50% health, instead of the original halving penalty. Emmet’s Trainer Move is designed to help maintain this passive, despite the Defense drop Archeops incurs, through the Damage Guard effect. While the lack of Speed boosts would be problematic for heavy move gauge drainers like Archeops, Emmet can mitigate it through 2 separate MGR tiles for Stone Edge on the Sync Grid.

Other important nodes on the Sync Grid would include:

As observed, much of Archeops’ utility is locked behind a 2nd duplicate, making Emmet a costly acquisition for those struggling to accumulate Gems. Fortunately, Emmet's base kit still allows him to be a great raw Striker. When you consider that Olivia is a much easier acquisition through regular scouting and is more than sufficient for handling the current Rock weak stages, Emmet really becomes a luxury unit. When one considers the looming 2nd-anniversary banners, it is really going to be a tough call to invest in this banner.

The issue of Healthy Strength 5 means that while Archeops is the king of burst damage, it suffers against drawn-out stages where there is a lot of HP to plough through. Even reserving it for the last health bar of a Legendary Arena stage may not suffice, considering that the bosses tend to strike a lot more frequently and can easily wipe the floor with the admittedly frail Archeops.

Builds that focus on Stone Edge fare better in Full Force Battles and Champion Stadium, particularly the latter. These stages are where its fast and furious playstyle works best to eliminate the middle unit ASAP, depriving the opposition of their Sync Move, as well as clearing out sides easily.

That said, there is an often-overlooked niche that Emmet is particularly good at. With Rock Slide, Archeops can be a powerhouse in the early stages of the Battle Villa, with the second MGR on Rock Slide being unlocked as early as the first duplicate. A Sand centric build that capitalizes on Sand Sync should synergize well enough with Hit the Gas 5 for a quick board wipe. However, its effectiveness fades as the run progresses as it starts needing the Move Point dependent boosts.

This grid build sees Stone Edge as the primary damage outlet for Archeops, hence the investment of energy primarily into the top right sector of its Sync Grid. The rest of the energy is allocated to Sand Sync (optional for faster stages where 2 Sandstorm MPs are enough) and Sand Blaster 5 for better synergy on a Sand build, which you would expect Archeops to be on.

This grid build instead utilizes Archeops as an AOE sweeper, even throwing Rock Slide Aggravation into the mix for extra utility. Players who don’t have a team built for enabling and/or capitalizing on flinches would be better off with Soften Up 1, which helps increase the odds of Archeops landing a critical hit with its Sync Move.

As with most, if not all Strike Sync Pairs, players won’t go wrong with picking up Critical Strike 2 as Archeops’ Lucky Skill.

As for other team options, players should definitely consider units like Regirock and Professor Kukui’s Lycanroc.

Emmet is definitely a powerful unit in his own right, thanks to Hit the Gas 5 and Healthy Strength 5. Yet, considering that players can easily get away with the much more accessible Olivia, it is really difficult to justify investment on his banner that unfortunately comes right before the 2nd year anniversary and other interesting banners.