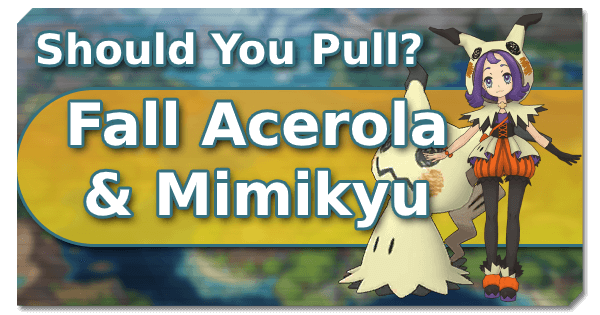 -Once its skills are used up, its effectiveness drops. Doesn’t have much presence across consecutive battles as a result.

-While it brings a few nice effects to the table, it’s not particularly useful in any existing game mode

Fall 2020 Acerola & Mimikyu fill the role of a very tricky secondary attacker, and they even come with the extra treat of pulling their weight as a main Ghost Type attacker in a pinch. They lean heavily into 0-bar attack skills to provide offensive pressure without taking up any of the sync gauge. Their ability to always confuse their target on a critical hit and always drop physical defense when attacking an already confused target means that they can quickly hamstring anything that they attack with little to no outside support. They also have the ability to evade the first attack that would have otherwise hit them, increase the odds of confusion self-hits with their grid, and potentially avoiding having to take damage at all with a well timed Phantom Force.

Despite these advantages, it’s not all candy corn and pumpkin spice for this adorable duo. When they run out of critical hit rate boosts (in the Villa) or the power to strike without taking up the gauge (in any format), their utility falls very quickly. Without their skills, they need to resort to Shadow Claw for damage, which means that they’ll start taking up part of the gauge in order to keep up the pressure (on top of the damage drop from Shadow Sneak to Claw). They also have the issue of all but requiring a maxed out critical rate in order to function. The issue here is that they can only raise it to +2 naturally without a bit of MP refresh luck (although this is often good enough, it leaves open the possibility of being screwed by rng) , and they won’t raise their own critical rate at all if Mimikyu’s already taken an attack at any point in the battle. All-in-all, Acerola & Mimikyu are great at the 100-meter dash, but aren’t going to win any marathons. They can help to dominate quicker, one or two wave fights in single battle formats like the Champion Stadium and Legendary Arena, but aren’t built for running through long or consecutive fights formats like Full Force Battles or the Villa.

The use of MP Refresh nodes on Shadow Sneak and Phantom Force is fairly important for most Mimikyu sync grids, especially if paired with slower teammates like Iris & Haxorus. It allows Acerola’s team members full access to the Move Gauge without sacrificing its own damage. If paired with faster teammates like Lusamine & Pheromosa that can stand to let Mimikyu throw out a Shadow Claw or two, heavy investment into damage buffing nodes like Power Flux 5 or Confusion Synergy 3 can work wonders through their excellent straight up damage boosts. Acerola & Mimikyu also make great use of their signature Stop Hitting Yourself 5 node (which takes the award for most hilarious node name in the game), as it raises the odds of confusion self-damage, and few other pairs spread confusion as efficiently as them.

In terms of team members, it’s immediately clear that Acerola & Mimikyu work best with strong physical attackers like Steven & Metagross who can take full advantage of the pair’s defense drops. They also appreciate the ability to hide behind bulky defenders like Sygna Suit Blue & Blastoise, as it allows them to buff their Critical Rate before going into Busted Form. Because of their more offensive focus, lucky skills like Power Flux 3 or Critical Strike 2 are going to have the highest performance. However, since they will be constantly attacking in most cases, Fast Track 2 can be great for increasing a team’s gauge acces even more, while Mad Strength 2 can help to max out their attack stat without having to hope for MP refreshes.

No: Acerola & Mimikyu have a niche, but it’s not a very wide one. They can provide powerful offensive utility to most teams, and it’s hard to go wrong using them if you already have a powerful core with two other sync pairs. However, they do tend to burn out fairly quickly. For this reason, it’s probably best to first take a look at what you currently have and need. Acerola & Mimikyu aren’t super self-sufficient and need to slot into a strong team to be genuinely effective, so their best if used as the icing on the cake. If you already have a solid base of powerful sync pairs, then you may find their unique niche fun and useful. But if you have some holes in your collection that leave you wanting for a strong main attacker or defender, then maybe consider pulling Fall 2020 Hilbert or Sygna Suit Blue & Blastoise instead.