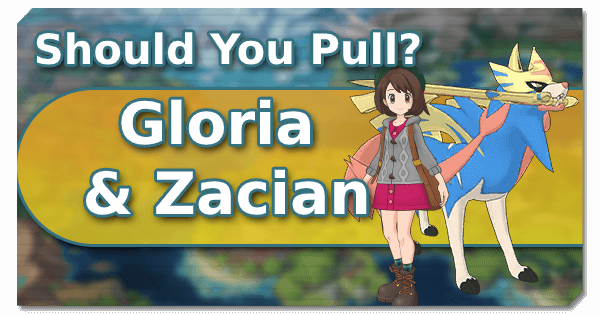 -Able to effectively act as both a Steel and Fairy Type attacker, though the latter role is noticeably weaker.

Gloria’s entire point is to deal swift damage, and she is quite effective at that. With a high speed stat, a passive skill that can restore gauge bars on any move use, and multiple guaranteed Sync Counter accelerations per game, Gloria is just plainly outstanding in her niche.

Gloria & Zacian are extremely interesting. On both their only steel type attack and their sync move they have the unique effect of dealing more damage to an opponent that already has a sync move buff active. The damage boost is 1.5x, so it’s definitely nothing to scoff at! They also have the ability to act as a Fairy Type striker via Play Rough, though this doesn’t benefit from the aforementioned damage buff. Another interesting aspect of this sync pair is how they apply self-buffs. Their trainer move, Laser-Sharp Focus!, raises Zacian’s attack by 2, decreases the pair’s sync move countdown by 1, and ensures that the next attack used will be a critical hit. The catch is that it only has 1 use, automatically restoring 1 MP when Gloria & Zacian use their sync move for the first time in lieu of the usual 2 upfront MP. . By getting a +2 attack boost at the start of the fight, +2 attack from the initial use of this skill, and then another +2 once their trainer move’s MP refreshes, Gloria & Zacian can easily max their own attack stat shortly after one accelerated sync move cycle.

The one issue with Gloria & Zacian is their lack of critical support beyond a single sure-crit per use of their trainer move. Because of the sheer power of critical attacks in Pokemon Masters, this leaves a huge chunk of the pair’s potential untapped without running them with critical rate support.

Unlike many other sync pairs, Gloria & Zacian don’t really have any “must have” nodes on their sync grid that tip the scales heavily when obtained. The best use of the grid is arguably the two Behemoth Blade Move Gauge Refresh 2 nodes. Head Start 1 and Adrenaline 1 are also tempting, but keep in mind that Gloria & Zacian deal max damage when they sync after the opponent, so you won’t want to rush to sync too much. Finally,  picking up move power nodes isn’t a bad idea, as most of the other nodes on the grid are a bit lackluster.

For any Zacian-centered team comp, it should be very obvious by this point that critical rate buffers are key. Sabrina & Alakazam, Sygna Suit Elesa & Rotom, and Lyra & Meganium are great choices, though they all have at least one effect that’s wasted on Gloria & Zacian. Phoebe & Dusknoir can also put in the work, but the lack of a sync grid makes them a bit lackluster. Sygna Suit Blue & Blastoise are also great, as they can potentially buff critical rate and speed while providing intermittent recovery and defense/special defense boosts. Another unique feature that can be capitalized with Gloria & Zacian is their huge speed stat and multiple Move gauge  refreshes, which can let them operate as a secondary striker despite their high bar usage. For example, Steven & Metagross can make a great partner, as these two pairs together can leverage absolutely cataclysmic Steel Type damage without worrying about the bar if paired with a solid support.

Lucky Skills can be a bit interesting. Critical Strike 2 is the go-to for most offensive sync pairs, as it provides a reliable buff that even affects sync moves. However, we once again have to bring up Gloria & Zacian’s tumultuous relationship with critical hits. For this reason, Power Flux 3 may be the better option if your plan doesn’t entail pairing them with critical rate support. It provides a higher damage boost than Critical Strike 2 when you have 6/6 bars, and Gloria & Zacian are outstanding at keeping up the move gauge, especially if refreshes are picked up on their grid. The one issue with Power Flux 3 is the fact that it does not boost sync moves, so Critical Strike 2 is move of choice if aiming for a 6-star EX build that leans on the sure crit from their trainer move.

The comments in regards to Critical Strike 2 and Power Flux 3 were based on erroneous and outdated data on the power of Power Flux 3. In truth, Critical Strike 2 provides a larger damage boost, and is generally the skill of choice unless for some reason the player chooses to not run critical rate support alongside Gloria & Zacian. Sorry for the mistake!

Yes. With huge damage potential and great passive effects, Gloria & Zacian are outstanding if played to their strengths. They also require a bit less support to operate, opening up the team for powerful secondary options that can serve various roles that other offensive sync pairs just can’t afford to have on their team. Just keep in mind that they do compete with Steven & Metagross as a Steel Type Striker, which packs less damage outside of a 6* EX sync nuke and is less effective in neutral battles, but has higher durability and the versatility to stay competitive. As for their role as a Fairy Type striker; it’s solid, but it falls behind Summer Lyra & Jigglypuff in terms of both damage and versatility.