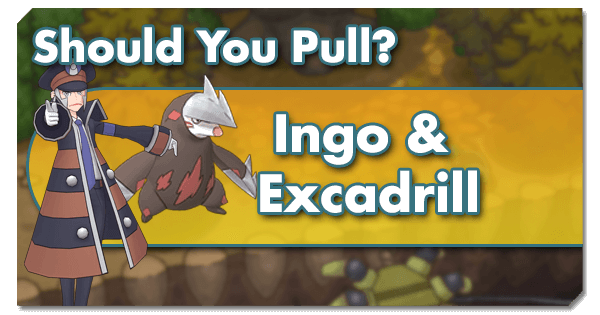 +Bulkiest Sandstorm setter in the game by a wide margin, can open up previously unavailable team building avenues

-Sandstorm’s buffs to multiple aspects of their kit combined with its limited duration can leave their early turns a bit claustrophobic, as they want to do multiple things at once.

Train your eyes in this direction, and conduct yourselves well, because at this juncture we’re right on track to meet Ingo & Excadrill, our newest Support sync pair! So step up before you run out of steam, and keep chugging along to victory or else you may just reach the end of the line!

Ingo & Excadrill are, as previously stated, a support sync pair. And they’re actually quite good at their job! They can tank about as well as Hilbert & Samurott when looking at base stats alone, and have a number of ways to bring that bulk even higher in practice. Move-wise, they have the ever-popular Potion, they can drop enemy Accuracy with Mud Slap, and have some particularly nice effects with their trainer move, All Aboard! This trainer move gives +1 Attack and +2 Critical Rate on use, but it also enables the Free Move Next effect for the entire team if used during a sandstorm. And we still haven’t touched on what many consider to be the crown-jewel of their kit: Sandstorm! We’ve long been starved for alternative Sandstorm setters that aren’t Acerola & Palossand or eggmons, and Ingo & Excadrill finally join the fray as the single bulkiest setter of this powerful weather to date. This has the potential to open up a number of new strategies and offers actual flexibility to Sandstorm teams.

Skill-wise, Ingo & Excadrill play perfectly with the rest of their kit. Sandy Pep Rally 9 has a 100% chance to raise the team’s Speed when Excadrill attacks during a sandstorm, Ferocious Affliction 2 boosts team Attack and Special Attack by 2 stages each the first time that Ingo & Excadrill use a status move, and Sedimentary provides Sandstorm damage immunity and a whopping 30% increase to Defense and Special Defense in a Sandstorm. And keep in mind that this is a direct stat increase, meaning it even applies to sync moves! In short, Ingo & Excadrill can easily take on the Tank duty for your team while buffing your offensive pairs.

So the absolute most obvious use for Ingo & Excadrill is their ability to support a Sandstorm team featuring power-house sync pairs like Emmet & Archeops or Cynthia & Garchomp. But is that all that they can do? Unlike some weather setters that are generally only “good” if used within a specific team archetype, Ingo & Excadrill have a number of powerful supportive options that make them very viable on dual-striker setups; their wide buffing profile, their solid tanking capabilities, and especially their ability to give the team Free Move Next multiple times per battle. When combined with heavy hitting 4-bar sync pairs, this can open up tremendous damage potential that also gives the move gauge time to refill, which can result in barrage after barrage of devastating strikes that most other support units simply cannot enable.

Ingo & Excadrill are quite capable of tanking well thanks to their solid bulk and great defensive options, though they excel the most in scenarios where the battle finishes before they run out of Sandstorm MP. This can make long, drawn out battles from Master Mode a bit of a strain on their capability to effectively tank. Fortunately, Ingo & Excadrill can enable some absolutely devastating team comps that excel at beating down the opposition. They are definitely worth considering here!

The Battle Villa is a gauntlet that rewards sync pairs that have a focus on longevity and non-reliance on skills. Sadly, Ingo & Excadrill don’t really fall into this category very well as we’ve previously outlined. Outside of fishing for MP refreshes and re-starting if they don’t activate, this sync pair just doesn’t have the tools needed to excel. They also have the issue of virtually needing to be paired with sync pairs that can deal with Sandstorm’s chip damage, as it will definitely begin to take a toll on the team if activated across multiple battles.

Ingo & Excadrill excel in this format, as their ability to potentially keep Sandstorm up throughout the battle and tank like a champ makes them very threatening in short-to-mid length battles.

Sandstorm running out before the fight ends can be an issue, but a strong showing up-front and/or careful planning by way of Sandstorm’s timing should let Ingo & Excadrill give the team the momentum needed to finish the job. It is also worth mentioning that their Unova theme skill may come in handy in the future for challenges that require 3 Unova units to clear.

We already have a few really nice tanks from Unova, and Skyla & Swanna in particular are free-to-play. On top of that, the only Unovan attacker that genuinely likes being paired with Sandstorm is Ingo’s brother, Emmet. As of right now, Ingo & Excadrill can work well here, but they aren’t necessary.

These are generally the most important tiles on Ingo & Excadrill’s grid:

For Lucky Skills; the good, old fashioned Vigilance is generally the way to go, especially if picking up Guarded Entry 1 or Gritty Guardian 1 due to the fact that Critical Hits pierce Defense boosts. Defense Crush 2 can also be nice when paired with physical attackers, though it is risky to not protect a tank of Excadrill’s caliber from Critical attacks.

So what kind of team support do Ingo & Excadrill appreciate? Why, anything that works well in Sandstorm, of course! The first stand-out is obviously Emmet & Archeops, who enjoys a substantial boost in power when a Sandstorm is raging while also enjoying the buffs that Ingo & Excadrill can provide. The other big-name for this role would be Cynthia & Garchomp, who now have a partner that can tank and set Sandstorm at the exact same time! This opens up the 3rd slot for other powerful teammate options that can support the team even farther. Olivia & Lycanroc can take full advantage of the sand via their grid and hit very hard as a result.  Prof. Kukui & Lycanroc also appreciate Sandstorm support, and can hit surprisingly hard while also dropping the opposing team’s Defense. Outside of Sandstorm, 4-bar attackers such as Lance & Dragonite, Sygna Suit Cynthia & Kommo-o, and Gloria & Zacian appreciate the wide boosts and Free Move Next effect that are so generously provided by Ingo & Excadrill, as it enables them to easily rain damage down on the opposing team as previously stated. This works extremely well with virtually any powerful damage-dealer, as the sheer utility of being able to outright ignore the move gauge bar and freely spam some of the most powerful moves in the game genuinely cannot be understated.

Another strategy to pair with Ingo & Excadrill is Evasion support, as it pairs perfectly with the Accuracy drops of Mud Slap. In this, New Years Lillie & Ribombee are the gold-standard, as they can spread full-team evasion and block status while Ingo & Excadrill offer Attack, Critical Rate, and Speed bonuses. This can help make Leech Life easier to use and stronger.  Just keep in mind that while this strategy can be effective, it’s also using Ingo & Excadrill in a manner that wastes the talents that make them so effective on a hyper-offensive team.

If this were a month or so ago, the answer would be… “Probably yes”? One aspect of the value of Ingo & Excadrill is directly proportional to Sandstorm-ready teammates available, and the other is based around how many gauge-hungry strikers can fit onto one team, so their utility can vary from player to player. As of right now, they can be a very solid pull for many players, but remember that the 2-year anniversary is on the near horizon.