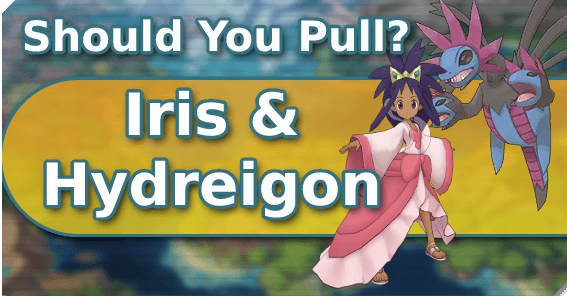 -The best sync pair for dropping enemy Attack/Special Attack, potentially able to bottom out both after just 6 moves.

-A bit unwieldy as a main Dragon Type attacker and tends to fight itself a bit in a few game modes.

One of only two Tech Pokefair units released thus far, Champion & Iris Hydreigon have two primary jobs in this game:

While not the first sync pair focused on lowering enemy offenses, Iris & Hydreigon are arguably the best. This is thanks to their AoE moves Breaking Swipe and Snarl, which lower Attack and Special Attack respectively, the ability Double Drop to ensure -2 stages to these stats per use instead of the stated -1, and even Piercing Gaze to ensure that these moves never miss. They are also capable of outstanding damage output thanks to their passive skill, Power Loving, which boosts damage based on how many times the target’s stats have been dropped. This can lead to significant damage once stat drops have added up. But while their general attacking power is good, their real power comes from the fact that their sync move comes with a similar effect, and can even be boosted more thanks to their sync grid, which has Pecking Order and Devastation to boost sync move damage based on drops in Attack and Special Attack respectively. All-in-all, these factors work together to make for a very strong sync pair that almost never becomes dead weight after their main job is already done.  The one issue worth mentioning might be that while they can act as a Dragon attacker in the vein of Sygna Suit Cynthia & Kommo-o or Lance & Dragonite, the setup needed to reach comparable non-Sync Move damage is fairly substantial, and requires a fair amount of team support to pull off effectively.

In terms of practical usage, Champion Iris & Hydreigon have a generally solid track record across most of the game’s modes, making them an appealing sync pair overall.

Bring Iris & Hydreigon into any stage that’s not immune or severely resistant to offense drops and you’ve just made your team very hard to break, especially when paired with a unit that can buff Defense and/or Special Defense. They can also be used as an offensive sync pair, especially in Dragon weak stages, for the advantage of additional role compression. However, here is where a few holes start to appear in their kit. First up is the fact that, as previously stated, they take a bit more setup than Lance or Sygna Suit Cynthia to hit genuinely hard, meaning battles could drag out a bit longer. The second issue is the fact that one of their biggest strengths can actually become a bit of a liability. Since Iris & Hydreigon are not a striker sync pair, their nuclear Sync Move only strikes a single target, even with their Six Star EX form unlocked. And this is where its sheer power actually becomes a bit of an issue, as when properly supported it might just one-shot the center, leaving the sides open to switch to powerful AoE moves that can threaten the entire team. Still, by this point both sides will likely have -6 Attack and Special Attack, greatly mitigating the risk.For these reasons, it’s important to play smart when using them for their damage dealing potential in the Champion’s Stadium

Iris & Hydreigon are doubtlessly effective here, but this format does hit one of their weaknesses more than most other modes; the fact that their bread-and-butter is lowering enemy stats. Once you take down a foe, a new one will take its place without any of the stat-drops that the player has spent so much time carrying over, so at that point it’s basically time to start from scratch. Still, their ability to adapt to dropping whichever stat needs to be dealt with quickly and efficiently means that they can circumnavigate this issue fairly well.

This is another area where Iris & Hydreigon can shine, but a bit more for their Tech skills than their damage output. The ability to drop enemy offenses combined with their general non-reliance on skill uses for this role can support the team substantially, and can give the player more time to set up and steamroll the enemy team. However, their offensive power is a bit lacking unless you first rack up a number of stat drops on the target. So if you intend to use them as a more typical offensive sync pair, then they’ll want to work with other sync pairs that passively boost stats and/or drop the enemy stats that Hydreigon doesn’t effect.

Here, Iris & Hydreigon are a bit of a mixed bag. Their stat-dropping ability can be invaluable, and their sync nuking ability is perfectly suited to what is generally a single-opponent format, but the fact that the opponent resets stat drops at each stage is a genuine problem. For this reason, Iris & Hydreigon are probably best saved for later stages of the fight, where they can cripple the 3rd stage in particular and then sync nuke them out of existence with ease.

As with most Tech sync pairs, Champion Iris & Hydreigon are best when used in one of two main capacities: a true Tech that focuses on making life hard on the opponent, or a damage dealer, which normally relies on the effects of their Tech set to maximize damage. But Iris & Hydreigon are particularly interesting in that they have the opportunity to spec for both tactics without sacrificing either if properly built.

Here are the nodes that are generally the most valuable for Champion Iris & Hydreigon:

And these are “runner up” nodes that are situationally useful, but may not be worth going out of your way for:

So how important is it to pull multiple copies of Champion Iris & Hydreigon? That largely depends on what you want to use them for.

In short; ⅕ is fine for Tech, ⅖ is a good starting point for an offensive build, and ⅗ is outright required for a full-powered sync nuke build. Figure out where you’re comfortable landing, and spend gems accordingly.

As far as Lucky Skills go, if you intend to use Iris & Hydreigon for their attacking prowess, then go for Critical Strike 2. It provides maximum damage output with Dragon Rush and boosts Sync Move damage even further, though you’ll want to bring along some Critical Rate support for this. If you just want this pair for their stat-dropping skills, then Defense Crush 2 is probably the way to go. Thanks to their passive skill, Iris & Hydreigon can use this to drop enemy defense by 2 stages per activation, which can boost their own damage and makes it very effective if paired with a Physical attacker.

Team-wise, Iris & Hydreigon can fit either as a typical Tech unit, or as an attacker in their own right. If used for their Tech skills first and foremost, then they can actually fit on most teams, and are perfect for any strong tank like Sygna Suit Blue & Blastoise or Jasmine & Steelix because of just how much longevity they can add. If used as a damage dealer, then Iris & Hydreigon are going to primarily want some Critical Rate support, Attack support, maybe some Speed support, and a bit of help dropping enemy stats. And lo-and-behold, Sygna Suit Blue & Blastoise can give almost all of the above, in particular being able to max Iris & Hydreigon’s Critical Rate without the need for MP refreshes thanks to their own trainer move. Another outstanding tank partner for this role is Sygna Suit Leaf & Venusaur. This is thanks to their tremendous bulk, two types of recovery options, and, most importantly, their ability to drop the enemy team’s Defense and/or Special Defense. Together, these two can decimate the opposing team’s stats in very short order, leaving them severely crippled in no time flat while also opening the gates for Hydreigon to hit absurdly hard. The issue here is that this leaves the team without a way to buff Attack or Critical Rate, much less speed. To fill these needs, Hilbert & Samurott are the perfect partners.. They can max out team Attack and Critical Rate thanks to their grid, and can also boost Speed. On top of this, their grid can allow them to either drop enemy Defense with Aqua Tail, or have solid odds of flinching with Waterfall, meaning they have genuine utility even after their buffs are all spent. Phoebe & Dusknoir are also solid partners thanks to their ability to fill in Hydreigon’s offensive gaps, and can help out with their ability to tank hits very well. Finally, frail sync pairs such as Lusamine & Pheromosa love having Iris & Hydreigon as partners, as they can provide substantial damage protection in short order.

Champion Iris & Hydreigon bring a lot of genuine utility to the table that can make them very attractive in multiple game modes. They can fit on a lot of teams, and are peerless in what they focus on. However, they can be outright shut down against some opponents and, while very powerful as an attacker, their setup requirement is fairly substantial.

Champion Iris & Hydreigon are definitely worth pulling, but just make sure that their skills are what you want on your team before dropping too many gems, and also note that we’re confirmed to have a new set of seasonal sync pairs on the way for April. We will likely know more about these sync pairs before this Pokefair ends, so waiting to see what’s in store before breaking the bank might be prudent.