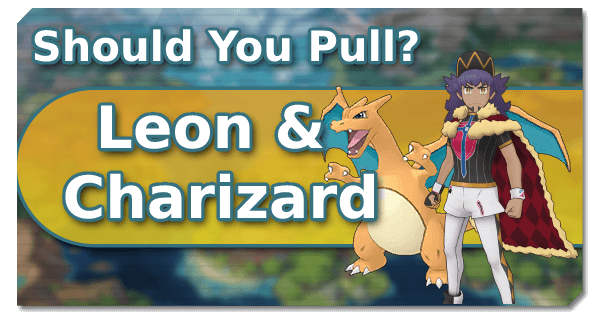 -If you already have all of the types that they use covered, then it may not be worth spending gems on a banner with such a low pull rate

Oh boy, we have got a lot going on here! To start with, let’s take a look at Leon & Charizard’s stats. A generalized overview shows great Attack and Special Attack, usable speed, and poor overall bulk. This basic stat-line was somewhat to be expected, as Leon & Charizard are the shiny new striker for the 1.5 year celebration. Next up are their Trainer Skill and moves. Strike a Pose! is first, as it’s a trainer skill that makes large changes across the board:

All of this, but with only one use. Rest assured, we’ll talk more about this skill later. Move-wise, we have Earthquake and Hurricane, both of which are very potent moves that give Leon very wide coverage and solid general utility. And then we have Inferno, which is just plainly great. It is a 4-bar move with high base power and a 100% chance to burn the target. The down side to this is its low 50% accuracy, which is a perfect segway into Leon & Charizard’s passive skills! Piercing Gaze is first, so the low accuracy of Inferno and Hurricane don’t matter in the least, as Charizard can’t miss with its attacks. Next, we have MP Rekindle 2, which gives a chance to restore 1 MP to Strike a Pose! every time that Leon & Charizard attack. We’ve never seen a skill quite like this before, and it’s very impressive in-and-of itself, but it does come with a drawback that, again, we’ll discuss a bit further down. Super Preparation 4 is next, as it gives Leon & Charizard a 50% chance to activate a Super Effective Damage buff on their next attack.

Finally, let’s look at the big one; Leon’s Master Skill: Galar Flag Bearer. This is an amazing skill, as it increases move damage by 10% and reduces attack damage taken by 20% for the entire team. On top of that, for every sync pair from Galar that you have on your team, it raises the entire team’s damage by an additional 10% and reduces damage taken by an additional 3%. At maximum, this is a 30% damage increase and 26% reduction to incoming damage. However, it does have one issue! Note the wording on this skill: powers up moves.  This means that it doesn’t affect sync move damage. Still, this isn’t a gigantic deal when Leon & Charizard are already burning up the field, cracking the earth, and calling down the four winds to annihilate their opponents.

So how about weaknesses? Well, their bulk is not exactly great. But just how bad is it in actuality? Well, they’re about on par with Serena & Delphox with their base stats, so they’re a bit frail, yet not on a par with glass cannons like Lusamine & Pheromosa. On top of that, they also have their Master Skill that reduces incoming damage by 20% or more, which is a bonus also spread to any tanks that they’re paired with. This only goes so far though, as their trainer move drops both of their defenses by 1 stage each per use. And while a single use is manageable for the most part, the fact that they have a passive skill that can reboot it multiple times throughout the battle means that Charizard could become very frail in short order, to the point where a random AoE move or an incoming Sync Move could severely cripple or outright KO them.

Next up, let’s review the major game modes that we currently have, and how well Leon & Charizard hold their own in them.

Leon & Charizard have great potential here, as their wide effectiveness gives them a solid presence against many challengers. They have 3 types that they can cover, so that in-and-of itself raises the odds of Leon finding himself particularly useful in a given week’s rotation. However, they do have one small draw back in the fact that they can only be used once. This seems like an obvious non-drawback, and it generally is, but if you end up relying on Charizard for all three of its types, then eventually you’ll get stuck when a Champion Stadium rolls around that focuses on two or more of these types. In short; if you don’t have a large collection of strikers, then Leon is amazing, but keep trying for other sync pairs that can do his job as well.

Because Full Force Battles tend to have numerous weaknesses, Leon can slot into many of them and unleash a torrent of damage with ease. Just make sure that you’re able to keep them alive through longer fights!

Leon & Charizard will pretty much always have numerous stages where they deal Super Effective damage, and they can score free MP refreshes fairly frequently. If they stand behind a solid enough wall (which their Master Skill will make even more solid), then they can sail through the Battle Villa very effectively!

Leon & Charizard can do a lot of different things, but their sync grid tends to focus their goals a bit. They have a few different builds that are viable, so let’s evaluate the stand-out nodes:

Next, here are the nodes that are too niche to generally recommend:

So how about Lucky Skills? Well, the tried-and-true Critical Strike 2 is the go-to for Leon & Charizard. It provides maximum damage with minimum requirements, so it’s the way to go. An argument could be made for Dauntless, Stalwart, or even Stoic 2 to help out with the Defense/Special Defense drops, but these only fix ½ of the problem at a time, and the damage drop when compared to Critical Strike 2 is substantial.

Team-wise, Leon really wants the spotlight. If you have him on the field, then he’s generally going to be the main striker. As such, he does have a few demands: Critical Rate support and  Attack/Special Attack support are first, as they allow Leon to not rely too heavily on his Trainer Move to power up Charizard. They are also going to want some Speed support, as their average speed doesn’t meld well with their high move gauge cost. Finally, a bit of healing and/or a few defensive buffs are greatly appreciated as well in order to let them survive a few  enemy Sync Moves. As usual, the sync pair that provides literally everything that Leon & Charizard need to operate is Sygna Suit Blue & Blastoise. Some stats can take a bit of time and/or luck to max out, but Blue & Blastoise can definitely do the job! But despite the premier Kantonian support unit’s pervasive buffing capabilities, the best support unit for Leon may be Lyra & Meganium. They can max out Critical Rate, potentially max out Attack and Special Attack with some MP refresh luck, reduce incoming Special Attack damage with Light Screen, and can even raise the sun with their sync move, boosting Charizard’s Fire Type moves by 50%. The synergy here cannot be understated, as the power offered by this duo is immense. Other solid partners include Skyla & Swanna, who offer outstanding Potion utility, Speed support, and Defense all in one. Piers & Obstagoon can also fill in some of the holes in Leon & Charizard while boosting the power of their Master Skill.

Leon & Charizard bring amazing damage role-compression to the field, but the answer to the age-old “should you pull” question isn’t 100% straight-forward. Here are a few considerations for and against Leon:

If you choose to pull for Leon, then it’s honestly not a bad choice by any stretch. He’ll serve you well, and is likely to age like fine wine. Just be informed before-hand in order to ensure that buyers remorse isn’t an issue.