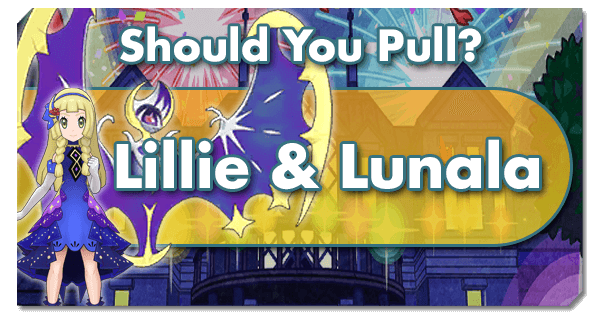 Our new premier Ghost Type striker, sporting high average performance with a setup time that puts every other unit in the game to shame.

One of the latest Master Sync Pairs to hit the scene, Lillie & Lunala are here to take over the Ghost Type meta. They enter into a nearly unoccupied niche as our first genuinely powerful Ghost Type Striker, which instantly gives them quite a bit of potential value. And, honestly, this is also one of the more all-around Striker units that we’ve seen in a while. Solid damage, decent bulk, a bit of utility sprinkled in for good measure; this is a unit that could be a great starting point for a new player. But that’s not to say that they’re only good for new players; as stated, they’re also the strongest Striker for Ghost Type damage, which in-and-of itself gives them a fair bit of value.

So what exactly makes these two so good? Let’s break it down a bit:

Lillie & Lunala’s offensive presence comes from their main attack; Moongeist Beam. This 4-bar Ghost Type attack sports solid base damage and the ability to outright ignore any skill that the opponent may have that would reduce incoming damage, as well as any Endurance effects that they may have active. They also have Moonblast for some Fairy Type coverage, which can be useful when considering the fact that virtually all other Fairy attackers are either Seasonal or Pokefair units. These attacks are driven by Lunala’s high base Special Attack, and are innately boosted by the Super Preparation skill. This skill has a 50% chance to grant the Super Effective Up Next effect, which can result in very nice damage, especially if it’s used on a Sync Move. And speaking of Sync Moves: Lillie & Lunala have 2 Sync Move multiplier tiles on their grid, and the Rejuvenate 6 skill to completely refill the Move Gauge any time that they use a Sync Move. And, at last, we come to the crown jewel of Lillie’s move arsenal: Shining Moonlight! At the meager cost of only having 1 MP, this move grants +6 Special Attack AND +3 Critical Rate in one use. That’s right; with a single skill use and no outside support, they’re already ready to hit at maximum pontential. When this kit is taken all-together, it’s obvious that Lillie & Lunala are very effective at what they do, and put their direct competition to shame.  And, of course, we also have their Master Skill; Alolan Flag Bearer. This skill offers buffs to team Offense and Defense, and becomes more powerful for every Alolan sync pair on the team. It’s a great tool, and one that helps power up this well balanced Sync Pair even more.

But what else can Lillie & Lunala do? Well, hold onto your hats, because we have more. First up, their bulk is actually very high for a Striker Sync Pair. To put it into perspective; their overall bulk is similar to Steven & Mega Metagross or Skyla & Swanna before buffs. They can easily tank a few powerful hits and keep going, and that’s not even the whole story. Their final skill, Healthy Benefits 5, takes a huge chunk of damage off of any attack that hits them when they have full HP. But this is nothing new, right? Lysandre & Yveltal can do the same, after all. Well, yes, but actually no. This variant of the skill doesn’t just protect against attacks, it also protects against Sync Moves, making it effective against the most common form of AoE damage in the game. Add to this the tried-and-true Potion and a few nice defensive nodes on their grid, and it’s pretty obvious that Lillie & Lunala are set to be not only strong, but also reliable.

So do Lillie & Lunala have any weaknesses? Unfortunately, yes. First up is their damage output. While they’re great in stages that they can do Super Effective damage to, without that niche they suffer a bit due to the large power-up granted by Super Preparation being worthless. This is compounded by the fact that Moongeist Beam has damage on the lower end of the 4-bar move spectrum and makes it so that they’re fine in neutral stages, but not particularly outstanding. They also suffer from a bit of the same problem that Leon & Charizard do: a slight lack of good regional sync pairs to work with. In particular, they have a bit of an issue with Alolan Supports, as 2 of the 5 units that we have today are… also Lillie. Finally, we have the fact that the offensive metagame is sort of running away from them at the moment. Weather and Terrain giving boosts to specific types is the name of the game currently, so having a type that can’t capitalize on any huge outside boosts like these is a bit of a let-down. Again: Lillie & Lunala are great, but they’re not dropping into the game as frontrunners of the general Striker race.

Now that we know just what Lillie & Lunala can do, let’s review how they will tend to fare in different game modes:

Lillie & Lunala have a very solid niche here as the new top Ghost striker. It’s especially worth mentioning that many of the stages that sport Ghost weaknesses also tend to throw around some very powerful attacks, so Lunala’s durability could turn out to be invaluable here.

Reliance on skills means that Lillie & Lunala are useless… right? Well, not always! Since Lillie & Lunala max their damage potential with one skill use, have a Sync Grid tile that can score an MP refresh, and also have very good defensive options, they have the potential to absolutely wreck the Battle Villa without breaking a sweat. Obviously, the one caveat is that they’re only outstanding  if you don’t mind restarting multiple times when fishing for the MP refresh.

Lillie & Lunala are great in battles of attrition, so they will be able to spook their way through many of these challenges with ease.

With the ability to deal very solid damage and stay on the field for a prolonged period, Lillie & Lunala are great choices here. Especially worth noting is the special effect on Moongeist Beam that allows it to ignore whatever unique defensive measures the arena boss may have, making them outstanding generalist picks.

Powerful Alolan attackers aren’t terribly common, so Lillie might be able to fill out a need here.

These are generally the most important tiles on Lillie & Lunala’s grid:

This time, you might be surprised in terms of which Lucky Skill is best! ...oh, wait, no you won’t; it’s Critical Strike 2.

Lillie & Lunala have Special Attack and Critical Rate buffs covered to an absolutely ludicrous degree, so what else do they need? Well, a solid tank is great, as is some Speed support. But beyond that, they really aren’t demanding at all. This opens the team up to a lot of different options.

First up is the old-reliable Skyla & Swanna. These two can tank, potentially max out team Speed, and can also potentially max out Defense while providing even more Potion support to make Lunala that much more difficult to put down. Masked Royal & Incineroar offer maxed team Speed, can offer solid damage for the team and debilitating debuffs for the opposing team, and even powers up Alolan Flag Bearer, making the team stronger as a result. Palentines Dawn & Alcreamie can reliably drop the opposing team’s Special Defense, potentially raising Lillie & Lunala’s damage to impressive heights. Kiawe & Alolan Marowak also offer a power-up on Alolan Flag Bearer, and can boost team Speed and accelerate the Move Gauge to make Moongeist Beam that much easier to use. N & Reshiram provide solid damage and great debuffs, especially to Special Defense, which will result in even more damage for Lillie & Lunala. Just note that the move gauge is likely to be an issue in this case, as both will be fighting for the use of their 4-bar moves. Champion Iris & Hydreigon can cripple the opposing team’s offensive capabilities, accelerate the move gauge, and provide very solid damage when all is said and done. Acerola & Mimikyu boost Lillie & Lunala’s Master Skill thanks to being from Alola, and have multiple attacks that don’t take move gauge to use. They can give Lillie & Lunala some breathing room and a chance to use Moongeist Beam without needing to worry about the gauge so much.  Ingo & Excadrill can boost team Speed and grant Free Move Next for any dual-Striker setup, though their Sandstorm will break Healthy Benefits 5. Fortunately, Sandstorm damage takes effect before auto-recovery, and does less damage than is lost every turn, so Healthy Healing and other auto-recover effects can negate this issue.

Lillie & Lunala may not be the absolute apex of damage output, but they enter a virtually untouched niche as a Ghost Type Striker, and are also very flexible and versatile as well. They boast the fastest setup to date, are fairly hard to put down, and are very all-around solid. While they don’t quite fall into the “absolute must-have” category, they’re definitely worth having for players in need of some Ghost coverage or just want some insta-setup damage, and can also be very reliable for newer players joining us for their first anniversary celebration this year. In short: they are definitely worth pulling if their skills can fill a need in your team, or if they just look like fun to use.