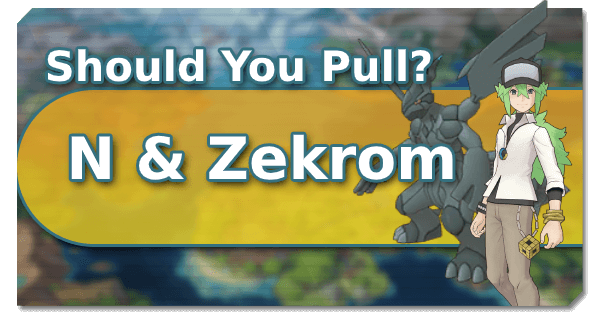 N and Zekrom are lightning in a bottle; let them out and they’ll tear into the opposing team extremely hard. They have the advantages of a very high base attack and two high base power moves to rely on, something that many other strikers only have one or the other of. On top of that, Electric Terrain can give them an even larger boost to their already devastating Bolt Strike, making them frighteningly powerful with the proper team comp and able to very effectively tackle even stages that are not weak to Electric Type damage. Damage is the entire point of N and Zekrom; they want to see everything fall in their wake, and they are definitely good at achieving their ideals.

However, N and Zekrom aren’t perfect. They do have issues with their low speed stat that are compounded by Bolt Strike’s 4 bar cost, and they also have a bit of wasted potential in the way that their trainer move’s damage boost works, as it loses its Super Effective damage buff once N & Zekrom have a sync buff active. In general, N and Zekrom will be too busy buffing up at the start of the fight, and will probably only get one use out of this effect. That said, the former issue is mitigated to some degree by N & Zekrom’s ability to use their moves for free at specific points in the battle and their trainer move speed boosts. As for the trainer move’s Super Effective damage buff; that one use of the effect is likely to be their potentially devastating first sync move, so it’s not a huge loss.

N and Zekrom are potentially outstanding in the Champion’s Stadium due to their huge damage potential and the very solid team comps that they tend to encourage. If a stage is weak to Electric, it won’t take long for the Deep Black Pokemon to impose its ideals on the opposing team by utterly annihilating them. The Legendary Arena and Full Force Battles have much the same outcome, as both appreciate a swift and effective resolution. The one area that N and Zekrom are a bit less outstanding in is the Battle Villa, as they rely fairly heavily on buffs to patch up their speed stat, and without them they’re frequently going to give the opposing side an extra move or two while waiting for the ability to attack. They can at least help to wallbreak their way through a few stages with ease, though.

Grid-wise, N and Zekrom’s suffered the same fate as many of the sync pairs with a great base kit: it doesn’t do much for them. Arguably, the most important nodes are Bolt Strike Move Gauge Refresh 2 and Bolt Strike Move Gauge Refresh 3, as they greatly help with this sync pair’s move gauge issues. Bolt Strike: Hostile Environment 1 can be useful for spreading paralysis if not paired with a more effective option for this tactic, and it also chains perfectly into Static Shock 3 and their six sync move damage+ nodes. It’s also possible to aim for a Dragon Type moveset that focuses on Outrage, but it’s honestly not a great choice for this role. This is partly because it would need a lucky skill like Lessen Confusion 9 to do something similar to Iris & Haxorus, which does basically nothing for their ability to deal damage as an Electric Type striker. On top of this, Zekrom is also weak to Dragon Type attacks, even further calling its utility as a Dragon Type striker into suspect.

Speaking of lucky skills: Critical Strike 2 is, as usual, about the best option on the table. It provides a large and consistent damage boost, but the one caveat is the fact that N & Zekrom need critical rate support to use the skill to any real degree. Power Flux 3 is more useful in cases where critical rate boosts are not available (leaving a huge pool of damage on the table), though this does not meld well with N & Zekrom’s high move gauge cost and low speed.

As far as team comps go, N & Zekrom have two absolute best friends. The first is Sygna Suit Blue & Blastoise, as they fill literally every hole that N & Zekrom have in their kit. Critical rate buffs, speed buffs, attack buffs, defense/special defense buffs, and even move gauge boost are all available at the same time. It’s hard to go wrong pairing N & Zekrom with the game’s premier tank. The second is Volkner & Luxray as they provide paralysis support to boost sync move damage with the aforementioned Static Shock 3 sync grid node, and the absolutely tremendous boost that Electric Terrain brings. Skyla & Swanna are also outstanding, as they simultaneously patch up N & Zekrom’s defenses, which are lowered by their trainer move, and increase team speed/finish maxing N & Zekrom’s speed. Sabrina & Alakazam also make good partners thanks to their ability to max out the team’s critical rate and as provide healing and Barrier support. However, the rest of their kit is largely ineffective on physical attackers.

In general, N & Zekrom provide enough power to be worth pulling. However, let’s address the elephant (zebra?) in the room and add a caveat to that statement. Elesa & Zebstrika are also Electric Type physical strikers, and they’re definitely a good sync pair as well.

In short: N & Zekrom are definitely stronger by a fair margin, but Elesa & Zebstrika are still a viable alternative. If you already have them, then pulling on N & Zekrom may not be quite as advantageous, though the damage difference is considerable.