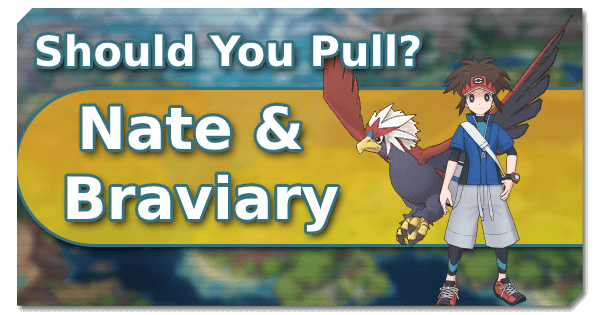 -Works out 3 times a week

-Gets 8 hours of sleep each night

As the first Pokemon in the game paired with legendary trainer and fitness icon Nate, Braviary represents a whole new frontier of power for world-beating uber strikers. Although it’s strange that such a centralizing pair should arrive at this seemingly random time, it can be easily explained by the date at which its data was added to the game: just two days before Halloween 2020. This is a carefully calculated move on DeNa’s part, clearly planned in order to strike fear into the wallets of players who previously believed now insignificant pairs like Charizard and Venusaur would get them through the game f2p. Now that it’s clear a 5/5 Braviary is all but necessary for anyone claiming to be a real pokemon master, the time has come to acknowledge its true role in the meta: causing such a rush to buy gems that it crashes Apple’s servers, allowing DeNa’s espionage division to hack in and delete Fire Emblem Heroes from existence forever.

Although Nate’s Sync grid is one of the few for which can truly be said any build works (it’s just that crazy), there’s one particular node that is absolutely necessary for anyone hoping to get the best possible performance out of their Braviary: Pinpoint Entry. By further increasing the accuracy of a pair who’s trainer move already brings that stat to 100, builds making use of the node can actually melt the brain of their users as they attempt to understand what Dena was thinking when they designed this sync pair. This will render the outcome of the match instantly insignificant, also making it the single fastest way to clear a stage in the game.

In terms of team members, Nate’s status requires that he only be used alongside sync pairs befitting of the honour. This means that the optimal team composition for this pair also happens to be the only legal option; Beedrill, Braviary, and Avalugg’s combined power is such that the mere act of forming the team will provide a spiritual awakening of such profundity that the player will no longer care for the outcome of their Pokemon Masters games, beating every stage by default.

Do not scout this sync pair.