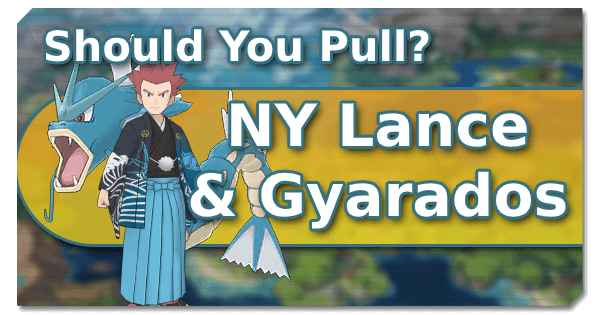 The second best Flying Type striker in game (as of writing time). Gyarados is basically a Flying Type variant of Dragonite, just a lot weaker. It does get to boost both its own offensive stats and accuracy. Gyarados’ tools are geared towards operating under Rain, with a nice, Move Gauge dependent power boost. Its Sync Grid helps it immensely in mitigating the hefty Move Gauge cost of Hyper Beam, which becomes a Flying Type move thanks to Flying Shift. All of its moves have imperfect accuracy, which makes its early plays rather risky until it has used its Trainer Move. It also lacks Potion MPR, which definitely affects its longevity in tougher battles.

Gyarados’ best attribution depends on the state of the battle. In the early to mid stages, where players still have ample access to Move Gauge recovery, Gyarados is best used as a Hyper Beam spammer. As the battle drags on and resources dwindle, players can then shift gear towards the Physical end, utilizing Bounce to both buy time for the Move Gauge to refill, as well as avoid most regular hits.

Through Carry On, if players choose to redeem it on the Sync Grid, Gyarados actually gets progressively better in longer battles, when it comes to Sync damage. Otherwise, it is highly reliant on Trainer Moves from both itself and its allies to operate. This cuts into its reliability in Battle Villa, making it better suited for a burst boss stage run. Conversely, Gyarados would fare better in the Champion Arena, since it can only be used for one of the stages of any run. As is the case with Dragonite, a triple Gyarados strategy can be applied to Co-Op stages, though players do have to note the stark fall in Base Stats.

This build is arguably the most self-sufficient model for Gyarados, allowing it to fit on generic teams without having to rely on Rain. Carry On and Sync Quickening are the key nodes to hit, catering more for Bounce and endgame play. This build allows players to nab minor MGRs on the way, though this does end up pricing Gyarados out of Accuracy buffing nodes.

Gyarados’ deficiencies see him pair well with Sync Pairs like Rosa & Serperior, Sygna Suit Elesa & Rotom, Skyla & Swanna, as well as Sabrina & Alakazam. Serperior provides both Move Gauge and Special Attack support and is given for free at the start of the game. Players who have better roster depth would be better off looking towards Alakazam and Rotom. Both provide the Special Attack and Accuracy boosts that Gyarados desperately needs, while also increasing Critical Hit rate. Swanna provides Move Gauge support through Speed buffing, as well as being an overall better healer. Like Serperior, Swanna is free and is slated to get her EX soon.

Of the candidates listed above, Alakazam and Swanna provide the best overall value thanks to Theme Skills, assuming that Gyarados gets the Kanto tag.

No: Gyarados definitely has its value given the right support. The only other viable Flying Type Strike option is Blue and Pidgeot, which gives Gyarados ample room to shine. However, it doesn’t really offer a sizable enough improvement, if any, over its “rival” to warrant Gem investment. Additionally, his Banner comes in a congested schedule featuring fan favorites like May, N, and Mallow. Considering that he will only be available during the festive season where there will be high banner saturation, it is perhaps not the best idea to roll for him unless the player already has enough copies of the other Sync pairs on offer.