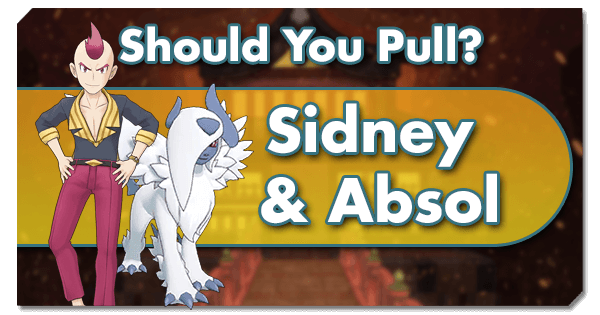 One of the most powerful Dark Type Sync Nukes, but kind of awkward otherwise. As a regular Spotlight Scout, players can largely afford to skip this banner in anticipation of the game’s 2nd anniversary.

Sidney makes his long-awaited debut in Pokemon Masters as one of the game’s best Dark Type Sync nukes. Critical Strike 5 in its base Passives (after Mega Evolution) and the assurance to always land a critical hit with its Sync Move makes it a ferocious powerhouse in its own right.

As a Tech Unit, Absol’s main team utility tool lies in Potion, for which it fortunately gets Master Healer through Sync Grid. Tech units also get that tasty Sync power boost from attaining EX. Throw in the power boost from Confusion (which it is guaranteed to AOE inflict) and synergy with Hoenn Master Skills, and Mega Absol becomes even scarier.

A list of the important nodes on Sidney’s Sync Grid is listed below:

A quick look at Sidney’s Sync Grid reveals that much of the vital nodes are locked at 3/5, especially the 4 Sync Move Power nodes that help mitigate the lower Base Power of its Sync Move. The more valuable 2/5 nodes are also tucked into the corners, leaving Absol players who don’t have at least a 2nd duplicate in a slightly awkward position.

Additionally, Absol is markedly frail. It does get an Enduring effect from its Trainer Move, but it is only one use outside of the Sync Grid, costing it dearly in sustainability in the Battle Villa. It is also not as potent outside of Sync, since it lacks a 3 (or 4) bar move to DPS. Absol’s frailty can cause problems for it in the Legendary Arena since the bosses are likely to pull off some Sync Moves thanks to their heightened bulk and three HP bars.

The most straightforward setup that claims all 4 Sync Move Power nodes alongside Critastrophe 5 and Fuzzy Strike 2.

For players who can only afford a 2/5 Absol, this setup helps bide time until players can get that coveted 2nd duplicate. This particular setup turns Absol into a Gauge regenerator while relying on Super Desperate to pull off a powerful Sync Nuke after being in a pinch.

As a Hoenn unit, it goes without saying that one of the first considerations for Sidney’s teammates would be a Master Passive option. While most players would think immediately of the Physical buffing Groudon, Archie’s Special boosting Kyogre is arguably on equal footing, simply because the Master Passives don’t buff Absol’s Sync Move, which is its primary damage option. With Absol’s access to multiple Gauge replenishment nodes, it slots in near seamlessly as a cheap Gauge enabler. Players going for this route would then ideally want an affiliated tank to help maximize the efficiency of the Master Passive. Candidates would include the other 3 members of the Hoenn Elite 4 or even the likes of Lisia’s Altaria. Keeping regular Altaria means it retains its access to Twister, providing the team with a Confusion + Flinch combination to really disrupt the opposition.

Players looking to supplement Absol’s innate capabilities should definitely consider Karen’s Umbreon or Halloween Hilbert’s Mightyena for their Dark Type Theme Skills and better DPS capabilities. Karen’s Mega Houndoom is unfortunately excluded as it contests with Absol for the earlier Mega Evolution. Special mention goes to Lysandre’s Yveltal, who lacks a Dark Type Sync Move, while Sidney’s Potions can help maintain both HP Advantage and Healthy Buffer. Besides those considerations, Sidney's self-sufficiency alone (as he sets up his own Critical Rate and Confusion multiplier) makes him a valid consideration for any team that just wants to add a Sync Nuke to their core (while bringing extra potions for the Tank). That's one of his solid upsides when judging him on his own merit and makes him a pretty flexible Sync Pair.

Sidney is definitely powerful and players who get him fully boosted will not be disappointed by the rewards of their investment. However, considering how expensive his complete capabilities are to unlock, its status as a regular banner, and the looming 2nd anniversary, it would be very hard to justify a higher pull rating (outside of personal preferences).