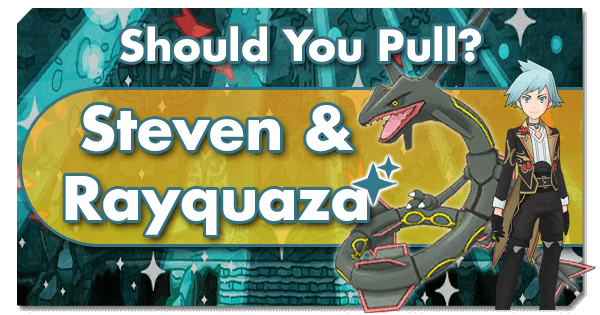 A well-rounded Sync Pair and the highest damage Flying Type Striker to date, but held back by damage output that doesn’t quite reach current meta expectations.

From the heavens it descends, alighting on the island of Pasio and joining with a true champion of global renown. Its glistening black scales reflect the light of the evening sun and tell the tale that this, the Master of the Ancients themselves and ruler of Mega Evolution, is the coveted apex of its kind. Shining with glory and majesty, its time has at last come. With none other than Steven Stone by its side to command its awesome power, the black dragon of the skies, Rayquaza in its Shining form, at last graces us with its glorious presence!

…..that’s what we should be saying about the coming of the first non-egg Shiny, especially since it’s Rayquaza of all Pokemon! And not just normal Rayquaza, it’s Shiny Mega Rayquaza! Steven & Rayquaza are coming to us in a starkly occupied niche with a genuinely good overall set, they’re the final member of the second anniversary trio, and they are absolutely glorious in terms of how spectacular they are. This SHOULD be the perfect storm to give us a new 6/6 unit, but...

So what’s the problem here? Well, mainly the fact that they’re built like Maxie & Groudon and Archie & Kyogre to a certain degree. These two have surprisingly low offensive stats, yet killer abilities that easily overcome this shortcoming when played to their strengths. Steven & Rayquaza have a similar theme; very low base offensive stats, and a few very nice abilities as compensation. However, they just don’t strike the same balance that Archie and Maxie do. Skill-wise they have Downside Up to reverse stat-drops, Move Gauge Refresh 4 to give 50% odds of refreshing one Move Gauge bar any time that they attack, and Good Form to boost damage for every single stat increase that they have. Their trainer moves are X Attack and Sky High!, which grants +3 Critical Rate, the Super Effective Up Next effect, as well as +2 Speed when Mega Rayquaza is active. Finally, their moves are Draco Meteor which grants +2 Special Attack on use thanks to Downside Up, and Dragon Ascent, which is a 4-bar Flying Type move with very high base power that raises Defense and Special Defense with every use (again thanks to Downside Up). These effects are all coveted and outstanding; they manage to be almost 100% self-sufficient, and have a few great effects that most strikers would kill for. This should be the sync pair that we’re screaming “THIS IS WHAT YOU’VE BEEN SAVING FOR” from the rooftops about, but those low offenses cut deep, and deny Steven & Rayquaza the lofty heights that they really should be able to attain.

But let’s be honest here; despite the hype and hate, Steven & Rayquaza are not bad! In fact, they’re actually quite solid. In particular, Dragon Ascent can, if setup properly, make them the top Flying Type Striker in the game. Their ability to use Draco Meteor and gain Special Attack means that they can also leverage their high speed and Move Gauge Refresh capabilities to work as a secondary Dragon striker as well. They can also become surprisingly bulky after a few uses of Dragon Ascent while also building up their own damage in the process thanks to Good Form. But, in the end, they just can’t live up to the hype that they absolutely exude by their design and timing. They aren’t great at using their Master Skill due to a lack of synergy with many Hoenn units, they can’t fully buff their own Attack without an MP refresh or the Fierce Entry tile of their grid post-Mega Evolution, and even with absolutely absurd multipliers on their Sync Grid that are exceedingly easy to access in most stages, their Sync Nuking capability is less than stellar.

Steven & Rayquaza enter the game at a point where we don’t have many good Flying Type strikers, and their self-buffing defenses can be very useful when facing high damage Sync Moves in particular. However, they are not good “generalists”, so they should really be relegated to Flying weak stages in order to shine.

Steven & Rayquaza can use Draco Meteor for some self-buffing damage, have very high speed post-Mega Evolution, can effectively have 2 Move Gauge refreshes on their attacks, and can even self-buff their defenses with Dragon Ascent. They’re not outstanding here, especially since their damage is still a bit suspect outside of Flying weak stages, but they can hold their own well enough.

Steven & Rayquaza are…. fine? On Flying weak stages, you could definitely do worse. But in the end they don’t really shine or falter here, they’re just “good”.

Self-buffing defenses can be surprisingly useful on high-damage stages, and having two effective types does give some additional utility. They’re fine here, as well.

Hoenn has a lot of good representation in Masters, so Steven & Rayquaza are unlikely to be game-changers here.

These are generally the most important tiles on Steven & Rayquaza’s grid:

Next are the tiles that are nice to have, but are either niche or not worth going out of the way for:

Another Striker, another +3 Critical Rate. Critical Strike 2 is still the best answer.

Steven & Rayquaza are a bit awkward team-wise. They’re largely self-sufficient, but not quite. They love all stat increases, but can boost most of the important stats themselves. They want to be paired with Hoenn units, but don’t have much team synergy with them.

Lillie & Clefairy have good synergy here. They can finish maxing Attack, max Special Attack, buff Accuracy for a bit more Good Form damage, can tank well, and can even use an EX Support buff with healing tacked on as Steven & Rayquaza don’t care too much about Mega Evolving. Christmas 2019 Rosa & Delibird can tank well and offer random stat increases for Good Form to garner boosts from, and can also boost Attack for faster/complete setup and accelerate the move gauge. Professor Kukui & Lycanrock can be useful for lowering the opposing team’s Defense and opening up more Dragon Ascent damage, and Bugsy & Scyther can do the same while also helping to buff up Steven & Rayquaza’s attack completely. Steven & Rayquaza can also be paired with Maxie & Groudon or Archie & Kyogre to double-up on Hoenn Master Skills in a dual-striker setup, just don’t go with a Sync Nuke build as it relies on clear weather for maximum damage.

Steven & Rayquaza are supposed to be the absolute hype carriers of the year 2 anniversary, and many members of the Pokemon Masters community are deriding them as disappointing and downright bad. But is that truly fair? It’s true that they’ve fallen from the heights of our expectations, which makes them seem all the worse, but they are actually very solid and reliable in what they do. If they were a random Pokefair unit put out at virtually any other point in the year, then the general consensus would likely be “they’re not must-have, but they’re good”, and that’s the conclusion that we come to here.

In a strange way, the build here is actually somewhat good news. Instead of giving us a unit that sets the new standard of offensive prowess in Pokemon Masters, DeNA gave us something that, while powerful, is a bit more well rounded than other big-names. This could be seen as a sign that they’re paying attention to the game’s current balance, and trying to avoid continued power-creep for our Strikers moving forward. In this light, Steven & Rayquaza may be a sign that our current juggernauts aren’t in any danger of losing their thrones any time soon.

Need some help with stages that are weak to Flying? Want a bit more Dragon power for a dual-striker setup? Then try for Steven & Rayquaza. While I’ll fully admit that they’re arguably the least important part of the Second Anniversary trio, they are not objectively bad, and are worth genuine consideration for what they bring to the table.