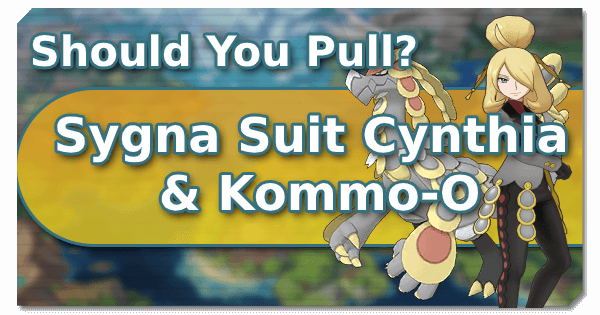 -Needs to take damage to raise its Critical Hit Chance, necessitating healing Support in most cases and slowing it down

-As in-demand niches go, high commitment Dragon Strikers aren’t near the top of the list

-Despite the time commitment  “Eyes On The Prize!” and High Five take to set up, they provide excellent stat boosting coverage and make Clanging Scales a force to be reckoned with

Kommo-O’s main niche is that of one the game’s premier high-commitment Dragon Type pairs, and as incredibly effective in this role as the pair is, it isn’t a particularly important niche for most players to be able to fill. It’s outclassed as a general use Dragon by the Story unlockable Haxorus which hopelessly outmatches it in terms of versatility, and as a general late game Aoe Striker by Mega Garchomp’s sheer power. This leaves it with only the aforementioned high commitment/late game (the pair requires specific team Support to deal damage early in the match) Dragon role, which Dragonite has already proven is only worth using over Iris or a late game Mega against a select few stages. On the bright side, its self sufficiency and access to powerful aoe make it a much more versatile pair than Dragonite, even if it can’t hope to reach Haxorus’ level of flexibility and practicality. Additionally, certain stage’s weakness to specifically Special Aoe, Unhindered, and/or Paralysis allow it to particularly excel where other late game Strikers would remain average in a variety of niche situations.

Kommo-O’s Sync Grid, while not quite as flexible as those of many other Pokefair pairs, does feature some highly powerful nodes that do a lot for its damage while somewhat mitigating its versatility issues. In terms of its actual usage, there are two main ways to go about building the pair’s Grid. A more defensive, status focused set with Hostile Environment and High Five which adds an interesting layer to its LA utility while also allowing it to function as a subpar backup tank, and an all-out Striker which makes use of Unhindered, Last Dash, and Gauge Refresh to further increase the pair’s raw dps.

On the Lucky Skill Front, Kommo-O can make great use of several greatly differing Skills depending on how you’ve set up its grid. A Techier build that invests heavily in Dragon’s Breath while saving the use of Clanging Scales for the late game will doubtlessly extract plenty of utility from Unbending's debuff mitigation, while offensive sets generally prefer something with a little more oomph. Specifically, Critical Strike 2’s excellent 20% damage boost is, as on most offensive pairs, a far greater boost than any of the other Skills can possibly provide.

Finally, Kommo-O’s rather stiff buffing cycle makes it somewhat reliant on Healers to bring it back from the pinch it must enter to raise its Critical Chance, or even Supports like Dusknoir who can simply provide that all-important buff themselves. Taking the latter option allows the player to greatly change the function of Kommo-O and its team by sacrificing defensive utility to create one of the game’s few early game aoe users.

While Kommo-O certainly has its fair share of massive strengths, it is simply outclassed in every niche for which it could be considered and as such simply isn’t worth the gems for the majority of players, especially this close to the one year anniversary event. As a lategame aoe Striker, the consistency and sheer power of Garchomp and Charizard put them far above Kommo-O. As a Dragon type Striker, the pair arguably isn’t even an upgrade from the free to use Haxorus’ versatility and greater self-sufficiency. Really the only niche it truly excels above all others in is that of a high commitment early game aoe Striker, which very few players have a genuine need of. Still, all of this being said, the pair can certainly still blow opponents away with proper Support, so diehard Kommo-O fans (if those exist?) can take solace in the pair’s fun, unique Passive and respectable (if outclassed) damage output.