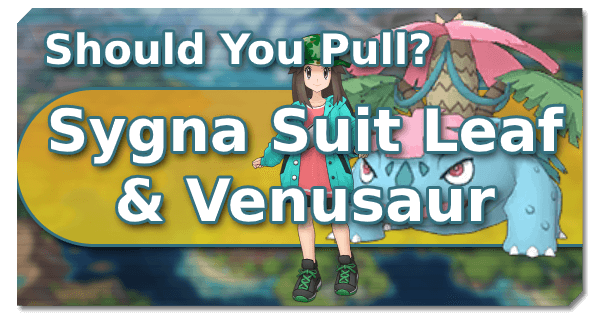 -The most healing on one pair in the game

-A lack of Supportive buffs does somewhat impact its synergy with Strikers that require them, but as combination Support/Tanks like Alakazam become more common this becomes less of an issue

Sygna Suit Leaf fulfills one of the easiest to understand, but most essential roles in the whole game: it’s the new Swanna. That one tank with massive amounts of healing, decent to great bulk, and a spammable low cost, which combine to let it easily slot into any comp and double the team’s survivability. But not only has Leaf finally dethroned the aforementioned bird as the game’s uber tank; it’s altered the very definition of such through its deadly debuffs and Status. Throughout the game’s history, we’ve had each of Venusaur’s individual strengths on separate pairs: Glalie’s aoe status and Hp regen, Rotom’s balanced bulk and Sync Acceleration, Mew’s incredible debuffs, and Swanna’s sheer healing power made those pairs excellent tanks. Venusaur has synthesized all of those things into one unkillable package, and in doing so has set a new standard for the uber tanks of the future.

Although Venusaur’s grid can be put together in a few different ways according to the needs of the team it’s intended for, there are (as with most pairs) a few essential nodes you’ll be sticking to as a skeleton. Firstly, the pair’s healing abilities are its greatest assets, so Mp Refreshes on both of these as well as Master Healer 2 will maximize the longevity of any team it’s placed on. From here, players can create a powerful general use Grid by opting for Toxic Power’s huge damage boost, which turns Venusaur into a legitimate secondary offensive threat. This universally useful Tech tank should then be rounded out by choosing between Razor Leaf Gauge Refresh for increased utility or Potent Toxin 2 for even more damage. Other options for grid builds include a more supportive Sun set with both of the associated nodes, or an all out offensive build that foregoes a few healing skills for the damage provided by Critical Strike 2 and Health Advantage 4.

In terms of Lucky Skills, Venusaur benefits hugely from the Support standbys of Vigilance, Defense Crush (particularly potent in combination with Sundering), and Psychic Guard to mitigate supereffective damage. Team compositions barely matter to the pair, as Venusaur’s versatility is such that it can be easily placed onto literally any core. It should, however, be noted that it particularly prefers hyper bulk tanks like Steelix or Blastoise to sit behind in combination with self buffing Strikers like Charizard and Sceptile. This means that one of the best ways to build a team around Venusaur is, and I heavily doubt this was an accident, to simply slap both of the other Kanto 6 Stars on either side of it.

As the pair to finally outclass Swanna, Leaf is now such an incredibly important piece of the meta that no one looking to stay on top of it can afford to pass the pair up. It’s every bit as important as the game’s uber Striker, Charizard, but because its damage comes from Status and its main role is that of a tank, it will never be outclassed by type advantage. What this means is that the pair is arguably even more versatile than Charizard. If that phrase doesn’t convince you to pull for a Sync Pair, I don’t know what will, but if you want to ensure you’ll be clearing the game’s toughest content in the face of mounting powercreep, Sygna Suit Leaf & Venusaur is an excellent place to start.