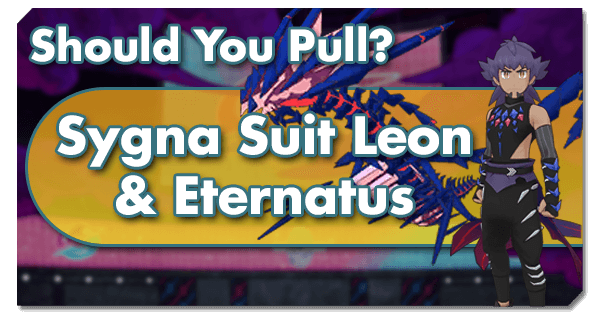 Leon is back again, and this time he’s got the Legendary Pokemon Eternatus; a powerful Pokemon that he… failed to actually catch in Sword and Shield. Second time’s the charm, right? Regardless, Leon & Eternatus comes to us as not only a potentially strong Dragon Type Sync Pair, but also the first Sync Pair capable of using the new Dynamax feature. Unlike Mega Evolution, which grants a Sync Pair access to a stronger form with unique bonuses for the remainder of the battle, the Dynamax system gives players access to a single, extremely powerful attack similar to a Sync Move. “Max Moves”, as they’re called, can be used at will (once per battle) and without any move gauge cost, making it potentially devastating if used properly. Leon and Eternatus in particular will use “Eternabeam” as their Max Move, a destructive Dragon Type move that benefits greatly from their self-sufficiency and high overall power.

So Leon & Eternatus can unload what is tantamount to a single-target Sync Nuke at will, but is that all that they can do? Not in the least. They’re also capable of a more traditional Sync Nuke with their grid, which genuinely drives home their role as a burst damage dealer. They have access to Dire Hit + to max out their Critical Rate, X Speed + to max out their speed at +3 stages per use, and their trainer move: Eternal Power!. This move raises their Special Attack by 3 stages , lowers their Sync Move countdown by 1, and even applies the Super Effective Up Next effect, all at the measly cost of -1 Special Defense stage per activation. They can max out all of their offensive capabilities and score Super Effective Up Next, which works perfectly with their Max Move, but what about their normal attacks? Well, here’s where their kit shows a crack or two. Their only attacking move is Dynamax Cannon. This 4-bar move has… somewhat middling damage, which can make it a bit awkward to use. On the bright side, it borrows the self-boost if the opponent has a Sync Move effect that was introduced on Gloria & Zacian. Leon & Eternatus are actually capable of dealing respectable overall damage, but it takes time to achieve. To put this into perspective, with proper move cue timing, it’s possible to finish 2 Sync Cycles before the opposing side is able to sync once, so getting solid damage on Dynamax Cannon is a bit drawn out. But, fortunately, Leon & Eternatus also have a few other tricks up their (non-existent) sleeves.

Leon and Eternatus have a few very interesting skills that help to shore up their kit substantially. The first is Lucky Seven 4, which provides a 50% chance to lower the opponent’s stats when Eternatus uses an attack. Which stats, you may be asking? Basically all of them.  Attack, Defense, Special Attack, Special Defense, Speed, Accuracy, and Evasion all drop at the same time, which is admittedly a fairly huge effect to potentially have on every single attack move used. Next up is Ramming Speed for a very nice damage boost to moves based on Speed boosts amassed. Sadly, this does not boost Eternabeam, though it’s still great for boosting the damage on Dynamax Cannon. Finally, we have MAX Damage Guard, which provides the Damage Guard effect after Leon & Eternatus use their Max Move. This will negate damage from the next successful attack that hits them, or halve damage from the next Sync Move that they take.

Leon & Eternatus can operate perfectly well here, acting as a powerful Dragon Type damage unit. They work very well when combined with other Dragon Type attackers to unload heavy damage, and can work as a primary attacker as well, though they are a bit slower in the primary role.

Leon & Eternatus can unload an Eternabeam for every single stage that they face, but without buffs its damage isn’t outstanding enough to be worth pulling for this game mode.

With the ability to self-buff and then quickly unload bursts of damage, Leon & Eternatus can help obliterate a target or two in these modes, though their general damage output isn’t great if the opposing team doesn’t have a sync buff, For these reasons, they’re great for short blitz, or great for a drawn-out battle, but languish a bit in mid-length fights.

We don’t have many Galar sync pairs at the moment, so Leon & Eternatus can fill the role and clean up their home region with ease.

These are generally the most important tiles on Sygna Suit Leon & Eternatus’ grid:

When it comes to actual utility, Leon & Eternatus have two primary offensive roles. The role first is as a secondary attacker, where they can take advantage of their self-sufficiency, sync-nuking capabilities, and zero-cost Max Move to work with another strong attacker and quickly end the fight. The other role is as the main attacker, which is definitely a bit more of a slow-burn. In this role, they are going to need to wait on the opponent to get a Sync Buff before their main attack, Dynamax Cannon, can start hitting like a truck. This is a slower option, but it is viable.

So how about team-mates? Well, first up we have partners for a dual-Striker setup. Attackers such as Lance & Dragonite or Sygna Suit Cynthia & Kommo-o fit the bill nicely, and can be used to unload heavy damage. Champion Iris & Hydreigon make another great fit for this role, as they deal solid damage when set up properly, can take advantage of the stat drops from Lucky Seven 4, and are less Move Gauge intensive to make use of.

In terms of support, Leon & Eternatus genuinely don’t need much. They’re capable of maxing their own offensive stats with ease, though help in maxing them faster is appreciated. A strong defensive wall such as Sygna Suit Blue & Blastoise can work as standard protection, while sync pairs that can boost team Speed or otherwise help with the Move Gauge such as Skyla & Swanna or Sycamore & Xerneas can be invaluable for dual-Striker builds, though the latter is only a strong option if the goal isn’t to Sync Nuke with Eternatus.

Unless you’re desperate for a Dragon Type attacker or just want to be able to drop a Dragon Type comet on the opposition, it’s probably best to skip this one. Sygna Suit Leon & Eternatus don’t offer many huge bonuses over their contemporaries. As the first user of a Max Move, they may be the prototype for a new meta-shift, and we may see them as a prime choice for some future content, but is it really worth gambling gems on a “what if” when the two-year anniversary is so close?