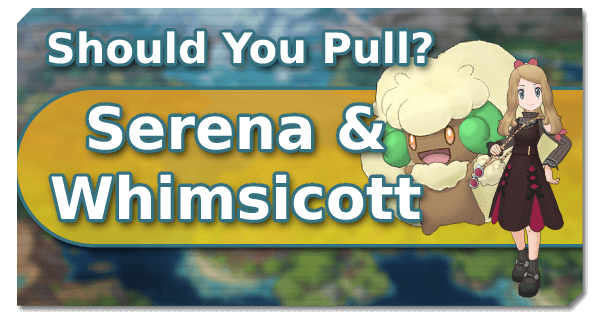 Far and away the game’s best Paralysis spreader and a viable damage dealer on top of that, but faces stiff competition from many tanks due to the status’ purely defensive impact.

-Great damage potential, but requires a fully invested grid to see it realized

Wait a minute, I wrote this whole article eh?

Anyways, we here at the SYP factory have found that the binary Yes/No distinction between pairs tended to oversimplify our viewpoints and lead to inconsistencies between authors, so we're tentatively moving to a 1-6 scale for the next few articles to see how the community responds. The criteria for each level of the scale look a little something like this, and will be included and refined with each article from now on:

Whimsicott is the very definition of a Tech unit, slowing down the opposition through debuffs and status while leveraging its excellent passives into excellent (if circumstantial) dps. Its most practical use is generally as a sideman that makes use of its combination of offensive and defensive utility to support both the striker and tank, respectively. The former will generally appreciate the damage Whimsicott is able to bring to the table (as well as the delay of opposing Sync Moves), while the latter takes advantage of the slowdown to compensate for the lack of backup that using the pair necessitates. Because it competes so fiercely with purely supportive healers like Starmie and Swanna in its third-wheeling role, Whimsicott is at its best in game modes like the Battle Villa that challenge them in ways it can circumvent (primarily the cumulative Trainer Skill uses Supports so struggle with). However, even in modes dominated by healers, Whimsicott can still thrive if used properly as these tend to include single-wave stages (as in Legendary Arena), which are particularly vulnerable to the pair’s debuffs and status. Finally, Whimsicott’s Fairy typing and surprisingly substantial Dps make it our strongest offensive pair of the type so far, although personally I find it difficult to imagine it occupying this niche for long.

Whimsicott’s grid isn’t the most versatile toolbox around, but the few useful nodes it does pack are borderline essential to the damage-dealing part of the pair’s niche. Without Paralysis Synergy 5, for instance, Moonblast’s capacity for damage quickly drops from excellent to barely average, and the additional damage from Inertia goes a long way in justifying its Sync Move over those of the dedicated Strikers it’s often paired with. Beyond those essentials, the player is pretty much free to tailor Whimsicott’s grid towards their specific needs. Options to this effect include Overpower for those looking to make use of the synergy between Whimsicott and Houndoom, Speed/Healing Sun for Meganium comps, and Unhindered for stages vulnerable to its effects.

When it comes to team composition, there are two primary ways to make use of your Whimsicott: the Techier, more common low-commitment offensive sideman, or the all-in offensive Fairy Striker. Both play styles have their pros and cons and excel in certain scenarios, with the latter being far better at taking advantage of Fairy-weak stages while the former’s focus on status and debuffs makes it an excellent way to fill holes in pre-existing cores. In terms of specific teammates, Whimsicott always loves the aoe Critical Hit buffs provided by pairs like Dusknoir and Blastoise, regardless of how it’s being used. The aforementioned Houndoom and Meganium also synergize with it and each other in a variety of ways that become quickly apparent at a glance of their Sync Grids, and the trio makes a solid offensive Sun Team even without further tampering.

Finally, Whimsicott’s offensively-minded roles make it a textbook user of the Critical Strike 2 and Power Flux 3 Lucky Skills, although Troublemaker can also be a viable option for the unlucky to guarantee Stun Spore’s Accuracy.

Overall, Whimsicott’s set of more than solid niches and general versatility make it a great pull for a wide variety of players. Anyone lacking Paralysis spreaders, abusers for Critical Rate boosting Supports, Fairy Type Attackers, or widely applicable general-use fill slots will doubtless get a great deal of mileage out of this Sync Pair. However, F2P gem pinchers looking to invest only in meta-definers don’t have much to be excited about here, and well-established longtime players who can already cover each of those roles may also want to pass on this one. Finally, collectors looking to fill out their Pokedexes will doubtless see Whimsicott as a priority due both to its seasonal designation and Serena’s high status as a character among these types of players.