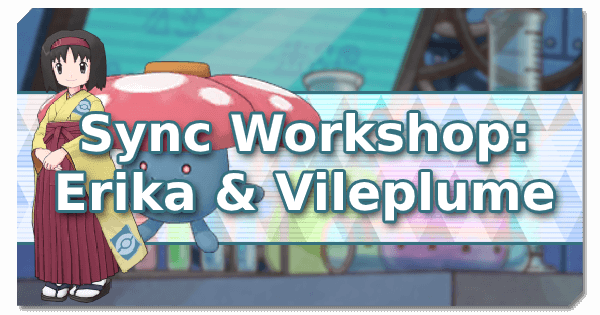 Erika & Vileplume are very easy to overlook for many players as they were one of the first free-to-play, three-star sync pairs in a game that has received a steady stream of flashy, five-star sync pairs since its initial release. However, they are something of a hidden gem, as their sync grid takes them from a lack-luster sync pair with little to work with aside from a 100% accurate Stun Spore to a snowballing secondary damage-dealer with offensively supportive qualities. The greatest tool at Vileplume’s disposal is actually the somewhat lackluster Energy Ball, which can be used to deal solid damage and drop enemy Sp.Defense while also sporting a very high chance of restoring the gauge bars that it took to activate if given the right sync build. This move and its buffing nodes make up the central theme of all of the listed grids, especially Offensive Support, with additional flavor added in for other grids such as Sun Support and a bit more skill sustainability for Skill Refresh. 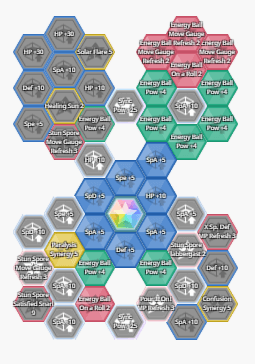 This grid primarily focuses on making the opponent as miserable as possible. Picking up three Energy Ball Move Gauge Refresh 2 nodes and two Energy Ball On a Roll 3 nodes helps make up for the mediocre power of Energy Ball by not only giving it a great chance of refreshing up to three bars on use, but also high odds of lowering the opponent’s Sp.Defense, which can let Vileplume provide snowballing support for itself and its teammates. This grid also picks up Paralysis Synergy 5 to take advantage of Vileplume’s 100% accurate Stun Spore, as well as seven Energy Ball Power+4 nodes to give Vileplume’s only source of damage a boost to around 1.5x its base power.

The set seeks to max out Vileplume’s attacking power and general utility, and can snowball very quickly. It works best along-side a Special Striker such as Sygna Suit Red & Charizard, Brendan & Sceptile or Giovanni & Mewtwo, which can take advantage of Vileplume’s ability to spread paralysis and drop enemy Sp.Defense. It can also provide some nice damage support as it can throw out a surprisingly respectable Energy Ball with very low net impact on the move gauge. This set also appreciates critical rate boosts from the likes of Phoebe & Dusknoir, and the full suite of buffs that Sabrina & Alakazam can bring, as Erika & Vileplume can’t buff their own critical rate, which does hurt their offensive presence. 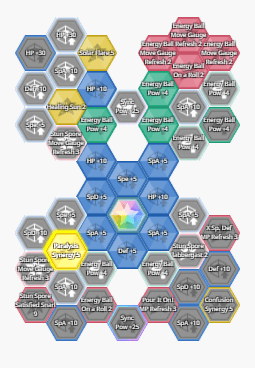 Three Energy Ball Move Gauge Refresh 2 and three Energy Ball Power+4 nodes work alongside the one Energy Ball On a Roll 3 node and the one and only Paralysis Synergy 5 node to boost the damage and utility of Energy Ball. Solar Flare 5 is then added to the mix, and makes this grid Vileplume’s strongest reasonable set offensively speaking. The other node that really makes this set stand out is Healing Sun 2, which works great on Vileplume as the entire goal of this grid is to use Energy Ball whenever possible.

Naturally, this grid needs a sun setter to work properly, so either Silver & Ho-oh or Blaine & Rapidashis a must. While this set is less powerful than the previous outside of the sun, it has the advantage of offering quite a bit more outright damage thanks to Solar Power 5. This is all while still keeping a very low average gauge cost that allows other powerful attackers to shine. This grid can work very nicely in many scenarios and is a top pick for the Villa due to its good sustainability. 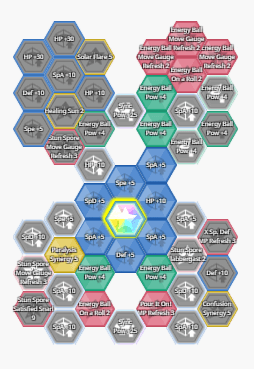 This grid takes the same basic path that we’ve seen before, with three Energy Ball Move Gauge Refresh 2, four Energy Ball Power+4, and two Energy Ball On a Roll 3 nodes alongside the Paralysis Synergy 5 node. Where this grid differs is the fact that it also picks up Pour it On! MP Refresh 3.

This set is primarily designed for Battle Villa, as Pour it On! is Vileplume’s only built-in method of increasing its Sp. Attack while also patching up its lower physical defense. It’s also possible to pick up X Sp.Defense MP Refresh 3, but that will involve dropping other important effects such as Energy Ball On a Roll 3, which hurts Vileplume’s offensive utility substantially. As with previous Grids, this set works best alongside powerful Special Strikers such as Red & Charizard and Giovanni & Mewtwo. This is due to its ability to fairly consistently drop enemy Sp.Defense without placing too great a strain on the move gauge.

In general, Power Flux 3 will serve Erika & Vileplume the best as it synergizes well with how little net gauge they usually use up by buffing their fairly low base offensive power nicely. Fast Track 2 also works surprisingly well, as you’ll generally be using Energy Ball at every possible chance, so this can quickly patch up the pair’s speed and help keep the gauge full. It’s probably the best option for the Sun Offense set as the skill that’ll get you to Ho-oh’s sun setting sync move the fastest. Defense Crush 2 can also be useful on the Sun Offense set as it can lower the enemy’s defense and open up more opportunities for Silver & Ho-oh to act as a mixed attacker. It also allows this pair to work with physical attackers a bit better and soften up bosses in the Legendary Arena for future pairs to capitalize on. Stoic 2 can work to passively patch up Erika & Vileplume’s lower physical defense and allows them to stand as a fairly solid mixed wall given a bit of time, though it's only really useful on the Skill Refresh set in the Villa, as they can already max their defense with skills naturally. Finally, Vigilance can help keep Erika & Vileplume alive through critical AoE attacks and Sync Moves that could potentially drop them early, especially if these moves are physical. It also has the advantage of assuring that the opponent can’t simply ignore Erika & Vileplume’s buffed defenses with a critical hit.