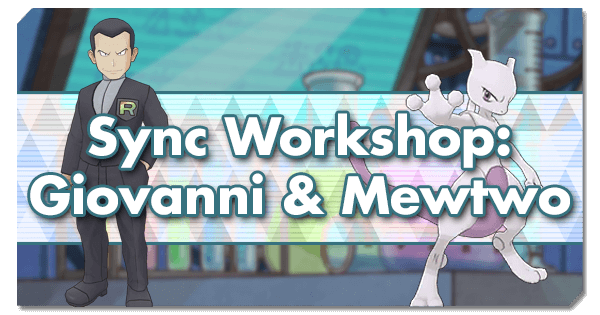 Giovanni & Mewtwo was the first Legendary Sync Pair added to Pokemon Masters, and they are the last Legendary Sync Pair to date to be granted a Sync Grid. They were fortunate enough to receive one of the better Sync Grids for an Event’s Legendary, abating worries that they were destined for the Solgaleo treatment. While some Sync Grids will tend to change the way that a Sync Pair is used to some degree, Giovanni & Mewtwo basically continue to do what they’ve always done, but just more of it. This is most obvious with the Psychic Attacker grid, which focuses on Psychic Type DPS through attacks and Sync Moves. The Ghost Attacker grid also follows this concept, with the emphasis falling on Shadow Ball for more Ghost Type DPS. Regardless of which way Giovanni & Mewtwo are used, it’s certain that the opposition is in for a world of pain. 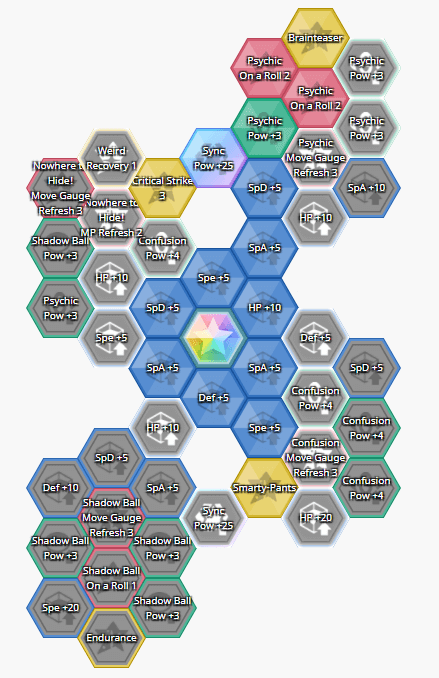 Brainteaser, Smarty-Pants, and the two Psychic: On a Roll 2 nodes are first, as they all work together perfectly to make Mewtwo into a snowballing monster with ever-increasing offensive power. As Psychic drops the opponent’s Special Defense, this will bring its own natural boosts in damage alongside the boosts offered by Brainteaser and Smarty-Pants, granting tremendous gains over time. This is also compounded by Critical Strike 3, which boosts damage for attacks and sync moves.  The Sync Move Power node can be dropped in favor of Psychic: Move Gauge Refresh 3 by changing up the bit a bit, and is primarily useful if Speed turns out to be an issue.

This grid has one single, solitary goal in mind: to absolutely scramble the opponent’s mind with overwhelming psychic powers. Psychic will basically self-boost with its dual On a Roll tiles, allowing Mewtwo’s power to naturally snowball.

The top Sync Pair to work with Giovanni & Mewtwo has to be Bianca & Musharna. Their ability to set Psychic Stage alone can enable huge amounts of additional damage for Mewtwo, and their value doesn’t stop there. They can fairly reliably act as a tank unit, they can rain down exceptional damage via Stored Power with a bit of support, or they can even help drop an opponent’s Special Defense stat with Psychic boosted by their On a Roll 4 skill. Gushing over Psychic Stage aside, Giovanni & Mewtwo also need help boosting their Special Attack. The top picks for this role include Sabrina & Alakazam, Lillie & Clefairy, and Professor Sycamore & Xerneas, though many other Support units can fill the role as well. They each have methods of buffing Special Attack, and have various additional advantages that they can offer as well. It’s especially worth noting that Critical Rate support, while of almost no use to Govanni & Mewtwo, is needed to maximize the damage potential of Bianca & Musharna. 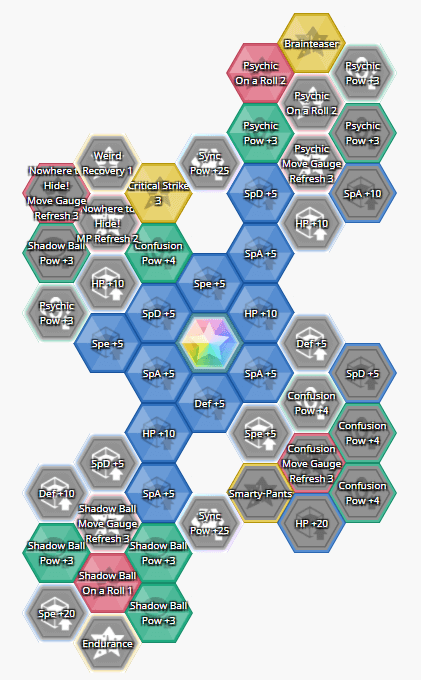 Very similar to the previous grid, this one foregoes Psychic and Sync Nuke damage in favor of turning Giovanni & Mewtwo into a powerful Ghost Type attacker. Critical Strike 3 and Brainteaser are first, as they can provide outstanding damage boosts to Shadow Ball. Shadow Ball: On a Roll 1 increases the odds of scoring Special Defense drops and booting Brainteaser, though it’s a bit of a shame that Shadow Ball has one less than Psychic. Finally, three Shadow Ball Power+3 tiles are also picked up for a bit of extra damage.

As stated; this is basically a different flavor of the previous grid with the same basic strategy. While generally less effective than the Psychic grid, Giovanni & Mewtwo definitely have the tools needed to be effective in the Ghost attacker role. One alternate take would be to drop 2 of the Shadow Ball Power+3 tiles and the miscellaneous Speed+5 energy-filler tile to pick up Shadow Ball: Move Gauge Refresh 3 if gauge management is an issue.

Team-wise, this grid has the same basic requirements as the previous minus the desire for Psychic Stage, as it does not boost Ghost Type damage. Sabrina & Alakazam, Lillie & Clefairy, and Professor Sycamore & Xerneas are all great options for boosting Special Attack, with the latter looking more attractive here as Sync Moves are less important to this build. Giovanni & Mewtwo also appreciate a bit of help with lowering enemy Special Defense, as Shadow Ball has fewer On a Roll tiles than Psychic. In this, we don’t have many viable options, but one stand-out is Dawn & Alcremie who can lower Special Defense reliably with Fake Tears while providing some extra heals and buffs. Erika & Vileplume are also great budget replacements, as they have outstanding odds of lowering Special Defense with Energy Ball with their grids, can tank surprisingly well on the Special side in particular, and can even spread Paralysis with Stun Spore as icing on the cake.

As a Sync Pair that is focused around damage with the ability to self-boost their Critical Rate, Critical Strike 2 is basically made for Giovanni & Mewtwo. It provides large and reliable damage boosts that naturally work well here. Power Flux 3 is the runner-up for damage boosts, though it genuinely does pale in comparison as it provides a less potent boost and doesn’t increase Sync Move damage.