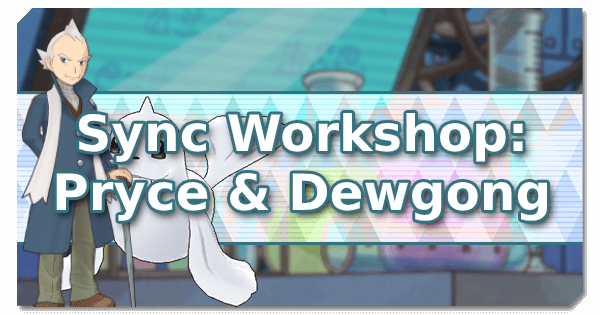 Pryce & Dewgong have an interesting grid. They have a number of nodes that can help power up their attacks, but most of them are tied to effects such as frozen opponents or hail, which makes this sync pair a bit more niche than many other strikers. Ice Beam Attacker attempts to alleviate this a bit by focusing on a simple, self-reliant damage approach, while Freeze Attacker capitalizes on the aforementioned freeze reliance, and Hail Attacker on the boosts granted through hail. Finally, Icy Wind Tech takes Pryce & Dewgong out of the striker role a bit and makes them more tech-focused with Icy Wind. 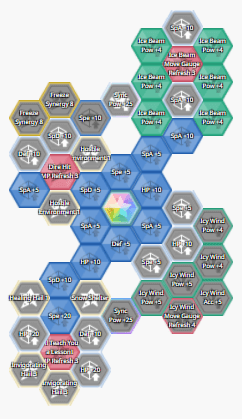 As of right now, Pokemon Masters has a lack of good Ice Type strikers, and Pryce & Dewgong stand at the forefront of the special side of this deficit. The goal of this grid is to maximize their offensive presence without requiring any additional effects on the field, such as a frozen opponent or hail. Six Ice Beam Power+4 nodes come first, giving Ice Beam a boost of +24 base power, which is a 43% damage boost to even a 5/5 Dewgong & Pryce. After this, Ice Beam Move Gauge Refresh 3 can help keep the gauge from running too low, while Dire Hit MP Refresh 3 and I’ll Teach You a Lesson! MP Refresh 3 help ensure that Pryce & Dewgong can fully buff themselves when needed. The goal of this grid is focused Ice Type special damage, and it can work in basically any scenario that calls for this niche. If the enemy doesn’t like ice and special attacks, then this grid answers the call. The main drawbacks to this grid are a lack of speed and a lack of special attack. Pryce & Dewgong mainly want to deal damage, and Ice Beam is a bit expensive, so Roxanne & Probopass make for outstanding partners due to their ability to boost both Speed and Special Attack at the same time. They can also help block AoE attacks, which will help to keep Pryce & Dewgong on the field for as long as possible. Rosa & Serperior also work extremely well, as they can directly refill the grid and buff special attack. 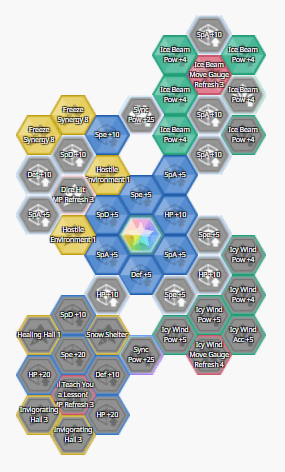 Definitely a high-risk, high-reward setup, this grid seeks to make use of the potentially massive damage boost that Pryce & Dewgong can reap if the target is frozen. It picks up two Freeze Synergy 8 nodes and two Hostile Environment 1 nodes in order to maximize Ice Beam’s freeze chance, as well as the damage boost that managing to inflict freeze will bring. Four Ice Beam Power+4 nodes are next in order to get the most out of the constant use of Ice Beam, while Ice Beam Move Gauge Refresh 3 finishes it out by giving Pryce & Dewgong a shot at refreshing the move gauge when using their main attack. Since this grid leans heavily into the boosts granted by freezing the opponent, Lorelei & Lapras makes for an ideal partner due to their ability to throw out Blizzard, which has an enhanced chance to freeze thanks to their built in Hostile Environment 1 skill. If going this route, then keeping the gauge up might be an issue, as will a lack of special attack support. Roxanne & Probopass can help out greatly on that front and Rosa & Serperior could also be very useful. It’s also worth considering Summer Steven & Alolan Sandslash or Candice & Abomasnow for the sake of hail, as it gives Lorelei & Lapras’ Blizzard 100% accuracy, though a full setup along these lines will leave the team without a tank to anchor it against powerful hits. 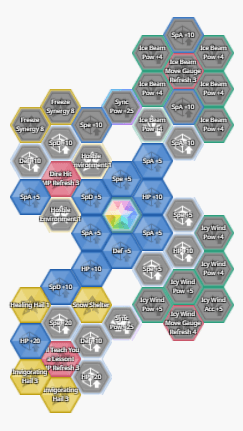 Hail is a fairly under-utilized weather type currently despite its advantages. Two Invigorating Hail 3 nodes make up the main core of this grid, with Healing Hail 1 and, of course, Snow Shelter to prevent hail damage. Because this takes up the majority of the grid’s energy, next we go for Dire Hit MP Refresh 3 and I’ll Teach You a Lesson! MP Refresh 3 in order to increase Pryce & Dewgong’s versatility while making them far more viable for the Villa. As should be obvious, this grid outright requires hail to operate, so either Candice & Abomasnow or Summer Steven & Alolan Sandslash are mandatory partners. Candice & Abomasnow offer immediate hail at will but can only do so twice, making them arguably more suited for Full Force battles and other single-battle formats. Summer Steven & Alolan Sandslash, meanwhile, offer hail with every use of a sync move, which can make this setup particularly viable for the Battle Villa. Roxanne & Probopass can help with this by buffing both damage and speed, though the sheer bulk and healing potential of an upgraded Skyla & Swanna may work out a bit better in practice given the limited team building options. 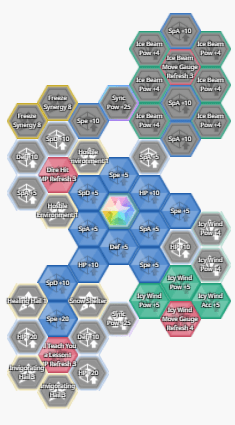 Icy Wind is a nice attack overall. It has the ability to throw out blanket -1 speed, and while its damage isn’t outstanding, it’s also not terrible. This simple grid departs from Pryce & Dewgong’s striker role in some ways in order to utilize them as something closer to a tech sync pair. Two Icy Wind  Power +5 nodes and the one and only Icy Wind Accuracy +5 node are the crux of this build, letting Icy Wind hit harder and more often, while Icy Wind Move Gauge Refresh 4 gives very nice odds of refunding a bit of the move gauge. Dire Hit MP Refresh 3 and I’ll Teach You a Lesson! MP Refresh 3 are also picked up in order to keep Pryce & Dewgong flexible. This is a particularly nice grid for the battle villa, as it doesn’t require much support to operate. It can work with many very powerful strikers and can keep dealing damage and reducing speed through multiple floors. However, the one bit of support that it really does appreciate is a bit of speed from sync pairs such as, once again, Roxanne & Probopass or Skyla & Swanna so that it doesn’t compete for the gauge too heavily.

Pryce & Dewgong have one primary issue; a lack of sheer power. Because of this, offensive lucky skills are the way to go. Critical Strike 2 is arguably the best choice, as Pryce & Dewgong can easily self-buff critical rate. But because they can’t raise their critical rate to +3 without a bit of luck from Dire Hit MP Refresh, Power Flux 3 is also perfectly viable. Defense Crush 2 is a great choice for the Icy Wind Tech build, as the entire focus is on constant AoE hits, making at least a few defense drops very likely over the course of a normal battle. This synergizes extremely well with basically any physical striker.