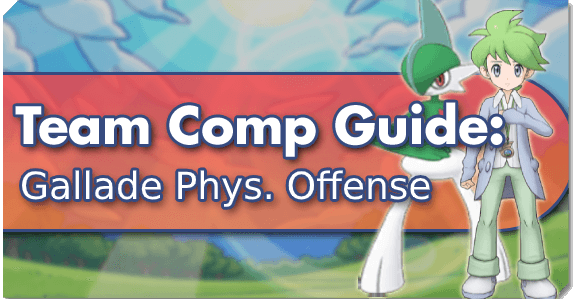 Defense Down
Sp. Def Down
Crit Chance Up
Attack Up
Sp. Atk Up
Accuracy Up
Speed when Taking Damage Up
Speed Up

Gallade is an incredibly powerful, strikingly unique pair and where the meat and potatoes of this team’s damage lies. Easy access to maxed out Critical Hit Chance combined with great stats, powerful moves, and multiple Critical Damage bonuses in its Sync Grid make Gallade a real powerhouse once it gets going, and getting it going is what this team is here to do. By the time it Mega Evolves, Gallade will just want to have stacked as many Low Sweep debuffs on the Stage Boss as possible, since its Supports and Passives take care of all the buffing for it. With how quickly Gallade reaches Mega and maxed offensive stats with on team, this should be done pretty quickly and from that point all you need to do is spam Close Combat until you’re playing against three small piles of dust.

Hilbert is where the bulk of this team’s offensive buffs come from since his “In This Together!” allows Gallade to reach +6 Attack without needing to waste a Low Sweep turn on “Here I Come!”. Beyond this, Samurott can also quickly and easily bring Gallade to +4 Speed with two uses of X Speed All, and combined with Gallade’s Postehaste boost when hit by a Sync Move that’s +6 Speed and +6 Attack. In practice, all Samurott needs to do is use each of its buffs twice to give Gallade the stats it needs and then employ its impressive bulk to keep Gallade alive for as long as possible.

Paralysis
Sp. Atk Up
Sync Count Down
Accuracy Up
Crit Chance Up
Rainy Sure Hit

Rotom is both what makes this team the blazingly fast offensive monster it is and what gives it a decent amount of survivability. First off, “Breathtaking!” combined with Zero In quickly maxes out Gallade’s chance to Critically Hit, and that’s before even taking into account its ability to lower the Sync Counter by six with two uses. On top of all that, Look Alive and Rotom’s powerful bulk give this team the ability to weather a surprising amount of damage, making Gallade’s devastating Close Combats all the more impressive. Finally, because “Breathtaking!” increases its target’s Accuracy and Rotom comes with X Sp.Atk, its presence on the team allows Gallade to go Special and start spamming Focus Blast at any moment if the opposing team makes it necessary. Practically, Rotom will want to throw out “Breathtaking!” twice early on and then just sit on its bulk protecting Gallade for the rest of the game (unless the need to use Focus Blast arises). In that very rare case, all Rotom needs to do is X Sp.Atk twice and then go right back to tanking.

This team can do a lot of things, but its primary purpose is to power through a particularly difficult Event or Battle Villa stage through a combination of debuffs and simply dealing loads of damage very quickly. While the team is afforded considerable survivability by the combination of Rotom’s bulk and Gallade’s Low Sweep, its big draw is the incredible damage Mega Gallade deals and how quickly it blazes through the Sync Counter. In terms of using the team in game, your buffing cycle leading up to Gallade’s evolution should look like this (Note: "Breathtaking!" gains multiple uses through its Sync Grid Move Gauge Refresh; if you miss the roll fill out the empty spaces with Low Sweeps):

Once Gallade has Mega Evolved, you’ve officially reached the fun part. From here, have Samurott throw out one or two X Speeds to max out Gallade’s offensive stats in combination with Posthaste, and get started on pouring Close Combats on the opposing team. In 95% of cases this’ll be all you need to do, but if you’re up against a HEAVILY physically bulky opponent you always have another option. One or two each of Rotom’s X Sp.Atk and Gallade’s “Here I Come!” is more than enough to make Gallade’s Focus Blasts a force to be reckoned with, so replacing Samurott’s “In This Together!”s during the buffing phase with X Speeds and then throwing out a few Sp.Atk buffs should set you up nicely for Special offense if needed.