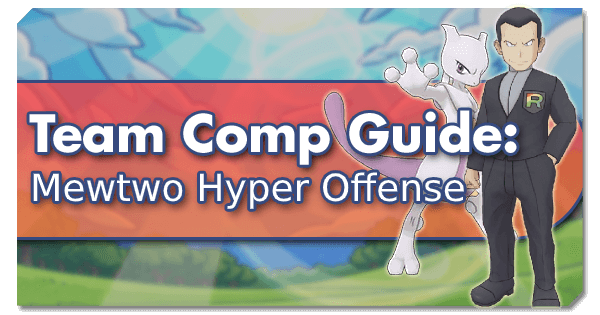 Confusion
Sp. Def Down
Evasion Up
Crit Chance Up
Low HP Power Up

Mewtwo is one of the precious few Strikers with an Attacking Stats over 400 without Mega Evolving, and this makes it an absolute monster in the early game. Combined with Alakazam’s “Sixth Sense”, Mewtwo is also able to max its offensive stats after only two turns of buffing. Because of these things, Mewtwo can quickly and efficiently start picking off dangerous Side Pairs while most other Strikers would be wading through lengthy buffing cycles to Mega Evolve, and that’s precisely what it’s on this team to do. What this looks like in action is Mewtwo throwing out two “Nowhere to Hide”s at the start of each match to max its Critical Hit Chance and give Alakazam time to give it +6 Sp.Atk. Once it does this, all it needs to do is eliminate the side pairs and then start pouring Psychics on the Stage Boss until it falls over.

Alakazam’s “Sixth Sense!” represents a huge part of Mewtwo’s early damage, and even without the rest of its kit would easily earn it a spot on the team. However, on top of that buffing powerhouse Alakazam also has the ability to cap Mewtwo’s speed in combination with Swanna through Reflect Pep Rally as well as raise its own speed with Speedy Entry. Finally, Reflect is also an incredibly flexible tool which can make this team surprisingly bulky in addition to boosting Speed. As soon as a game starts, while Mewtwo boosts its Critical Hit Chance, Alakazam should be looking to fire off two “Sixth Sense!”s, capping out Mewtwo’s Sp.Atk and nicely rounding out its offensive stats. Later on, if you ever find an opportunity to let up on damage for a moment and deem it necessary, Reflect can provide powerful damage reduction and a nice Speed Boost on top of Swanna’s “Take Flight!”.

Swanna has two highly important purposes on this team. First off, its “Take Flight!” gives Mewtwo the Speed it needs to dole out its impressive Damage quickly and efficiently. Second, its impressive Bulk combined with its extremely potent Gridded Potions give the team a considerable amount of survivability. This means that even though this team is geared towards blowing out the opposing team before the “late game'' even comes, it still has the ability to make the slog through long Battle Villa stages and come out on top. In game, Swanna fulfills these roles by “taking flight” twice at the start of each match and then making full use of Potion Mp Refresh by keeping the team topped off whenever a member dips below ¼ Hp.

This team is unique in that Mewtwo’s early power and Alakazam’s efficient buffs allow it to forego the usual extended buffing sequence into Mega Evolution opener. This allows it to take on Stages in ways that most other team’s can’t by quickly and easily eliminating dangerous Side Pairs without having to waste precious Mega time buffing afterwards. The team’s early dominance, however, does come at the price of some late game damage in comparison to powerhouse Megas like Charizard or Metagross. This isn’t to say that the team doesn’t still more than hold its own in the later stages of a match, but it merely continues to deal incredible damage as opposed to spiking to insane damage. Overall, this means the quicker you can end a game the more powerful this comp will be in comparison to something like Charizard Balance. In terms of how the team works in practice, its aforementioned lack of need for a long buffing cycle makes the segment much shorter than usual. We won’t even need a table this time! Simply devote the first two turns of the match to two uses of each pair’s unique move (“Nowhere to Hide”,“Sixth Sense!”, and “Take Flight!”), decide which of the opposing pairs is the most threatening, and then sit back and spam Psychic. There won't be much to do other than that later on in the game, although if you can find the Gauge for it Reflect is a powerful source of Damage Reduction and a decent Speed Boost with Pep Rally. And of course, Swanna’s Potion MP Refresh should be fully taken advantage of as the team starts to take damage (more on these pair’s Grids in their individual sections).