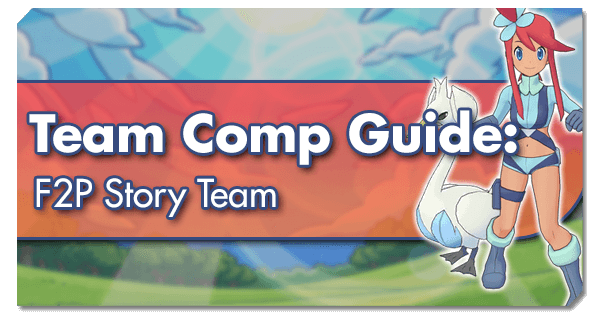 Like many strong teams in Pokemon Masters, the Free-To-Play Story Team consists of one Special Striker with two Supports. This is because the opposite ratio of Supports and Strikers leaves two Striker Sync Pairs sharing one Move Gauge, creating a bottleneck on attacks. Instead, the two Supports-- in this case, Rosa & Serperior and Skyla & Swanna-- work together to empower a third team member, Hau & Alolan Raichu. 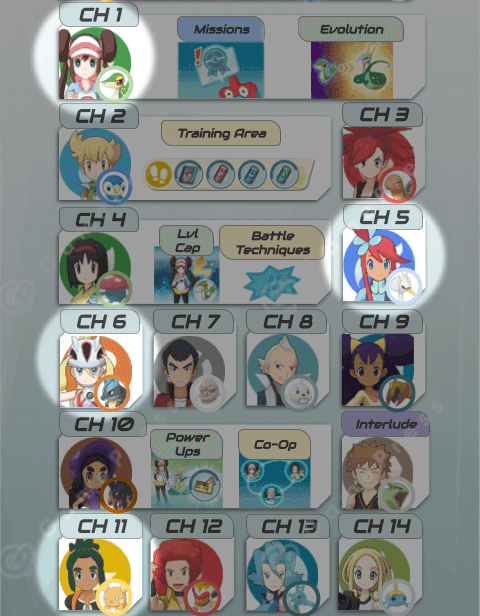 Build As You Go

Because rerolling in Pokemon Masters is so time-consuming-- with the first ten-pull taking place near the end of the story campaign-- completing content with free story Sync Pairs is highly recommended. Rosa & Serperior unlock from Chapter 1, with Skyla & Swanna becoming available in Chapter 5. The center member, Hau & Alolan Raichu, won’t appear until Chapter 11, which is why Korrina & Lucario are suggested in the meantime.

By focusing resources on these four characters, the player can finish the story with a solid yet flexible starter team that can swap in other Sync Pairs obtained from Summoning.

As the game’s strongest Bulky Support, Rosa & Serperior star in this team to tank hits and enable the team’s main Striker. She sports Time To Energize! which refills the energy gauge for the whole team, making for a versatile partner. Still, having a Speed-boosting teammate like Swanna helps her support capabilities, and with the Sp. Atk All ability Serperior prefers Special Striker teammates.

Paralysis
Sp. Atk Up
Speed Up
Evasion Up
AoE Damage
HP Up

Hau & Alolan Raichu star at the center of the team and pair well with Serperior’s Special Attack buffs. “Discharge” enables sweeping AoE damage, which can be launched in rapid succession using Serperior’s “Time to Energize!” What’s more, he has a self-sufficient Speed and Evasion buff in “Feel the Alolan Breeze!”, pushing his already-impressive Speed to new heights. Paralysis inflicted by “Discharge” will only further widen the Speed gap. Lower Bulk means he’ll rarely be targeted, but it’s still wise to make sure the second team member draws aggro before this glass cannon.

Crit Chance Up
Defense Down
Sp. Def Down
Attack Up
Speed Up
Flinch Immunity

To make the most of Serperior’s Special Attack boost, a Special Striker is preferred. Still, Korrina and Lucario are a formidable Pair for single-target damage. With Serperior tanking, she’s free to stack self-sufficient Attack and Critical Chance buffs, with a Speed buff coming during her Mega Evolution in the form of “Skate on Through!” Until then, Swanna’s Speed buffs benefit her greatly and will help with firing off Power-Up Punches in quick succession.

Because Close Combat comes with steep defensive penalties, Lucario should avoid AoE damage at all costs. For best results, take down the enemy’s central attacker before they can launch an AoE Sync Move.

If Serperior fuels the team, then Skyla and Swanna accelerate it with “Take Flight!” which grants a powerful Speed and Defense boost to all allied Sync Pairs. The Defense helps other supports tank hits, while heightened Speed pairs well with the attacker (in this case Hau & Alolan Raichu) and rolls well into her own Sync Move, High-Flying Sky Attack. Skyla's Potion will also see frequent use keeping Serperior alive on the frontline.

How To Use This Team

Below is a play-by-play table of moves to carry out.

With all the wind-up from the beginning, Raichu comes away ready to sweep with a whopping +6 to Special Attack. The whole team will also have at least +4 Speed, with Raichu reaching his personal limit after using “Feel The Aloloan Breeze!” The Move Gauge won’t have any problems filling, but “Time to Energize!” still plays an important role since time is of the essence. Once the opponent uses their Sync Move all stat bonuses will be reset, so this sequence should be carried out right away.

For a more sustained strategy on easier content, save one use of “Take Flight!” for afterwards, and buff Alolan Raichu back up with the remaining casts of “Feel The Alolan Breeze!” and X Sp. Atk.

If you're in trouble and wish to focus down the main attacker before they can launch a Sync Move, Swanna's "High-Flying Sky Attack" has respectable single-target damage scaling off of boosted Speed. Korrina & Lucario will also help against foes with higher Sp. Defense.