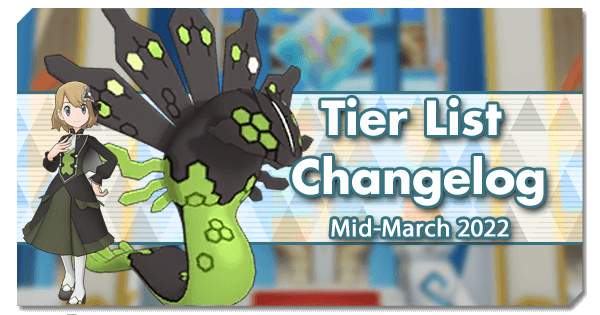 Welcome to the March update for our Tier Lists! This time, we got 3 new Poké Fairs as the anniversary units, a new Master Fair that completely redefines what a Top Tier Damage Dealer is, 3 new grids for old units, and 2 new EX unlocks! With that being said, let’s go right into it!

General – With the arrival of SS Serena and the gap she creates with the old units in Tier 0, we moved the bottom half of Tier 0 to Tier 1 and, as such, a cascade effect was made to make the Tiers more balanced. This is simply a redistribution and does not necessarily mean that the units got worse (and as a reminder, the lists aren’t meant to be compared with each other, so a Tier 1 Damage Dealer is not necessarily a worse unit overall than a Tier 0 Hybrid, for example). Other than that, sub-groups have been added to Tier 7 and Tier 8, and Tier 11 has been removed.

Tier 0 – Now, it’s composed of 3 sub-groups with one Sync Pair in each: SS Serena leading the Tier, SS Lusamine being on the middle, and Lucas closing after the two, being a key member for Dragon Zone compositions (arguably the strongest one at the moment) and providing an all around excellent offensive presence with low gauge consumption, good DPS, and excellent Sync Nuke damage for an easy setup. SS Serena was chosen to lead the tier alone due to her damage numbers being incomparable to any other unit in the game, with a Sync Move that’s able to get Sure Crit, give gauges with Rejuvenate, and being AoE while maintaining a damage comparable even to Tech EX units with an easy and fast setup and a DPS that surpasses even the likes of Leon & Charizard without bringing issues with team-building.

Tier 1 – Lear now leads the Tier on his own sub-group. Archie has been dropped to a new sub-group alongside SS Erika due to the downwards trend of Rain teams compared to other top compositions and SS Erika’s design as a unit showing to be generally more fit as a weather setter.

Tier 2 – Cyrus now joins the second subgroup with SS Leon and May due to his very consistent showing on both Dragon Zone teams and Rain teams after his Sync Grid expansion and EX being added. Despite all the lower units not changing places, it’s worth noting they also all got better with the addition of the anniversary units overall, so they’re more solidified on their placements.

Tier 3 – Anni Steven got a boost with the addition of Anni Skyla and her Flying Zone, providing him a new ceiling for his DPS and making his Sync Move a lot more respectable, becoming a viable option even off-type now. Diantha got a small boost due to the addition of Anni May, who can hasten her setup with X Sp Atk All and help boost Devastation for her mandatory Sync Move.

Tier 4 – N & Zekrom have been moved down due to Electric Terrain teams generally not being as useful for 3v3s as they once were compared to the constant raise of the power level for other builds and not being a standout unit on Legendary Gauntlet either. NY Lance has been moved to right below Lance with the addition of Flying Zone, being mostly a very similar unit to his Dragon counterpart at his peak, but being slightly inferior on Legendary Gauntlet due to his lesser bulk, Speed, and Potions. Nessa has also been re-evaluated and deemed worthy to go up one subgroup at least.

Tier 5 – Blue & Pidgeot have gone up again with the addition of Anni Skyla, who can both summon Flying Zone and activate Harry 5 for a great boost in power. Blue & Arcanine have also switched places with Gloria & Inteleon.

Lower Tiers – The old Tier 8 has been merged with the surrounding tiers alongside the addition of sub-groups.

General – A new Tier has been added between the old Tier 4 and 5. Sub-groups have been expanded down to Tier 6.

Tier 0 – Anni N has been moved to the bottom of the Tier on his own sub-group due to his support being lacking compared to the other Tier 0 units and his offensive presence not outweighting it. The middle sub-group has also been reordered.

Tier 1 – Anni Raihan, Anni May, and Anni Skyla have all been added to the top of the Tier on their own sub-group in that order. Bianca has been dropped from Tier 0 to the middle of Tier 1 with the recent surge in power for the Hybrid list and her own qualities not being as unique as they once were, with some points even being outclassed now. Sygna Suit Leaf has dropped one sub-group and is now separated from The Masked Royal and Classic Elesa.

Tier 2 – Serena, Palentine Serena, and Ghetsis have been redistributed to the top of this Tier. Kimono Grimsley is now alone on his sub-group, while the last one includes all of Champion Iris, Volkner, Spring May, and Sidney.

Tier 3 – Lysandre has been moved up with the addition of Flying Zone and they now share a sub-group with Holiday Nessa.

Tier 4 – Wikstrom has been added to the bottom sub-group of this Tier preliminary due to his Sync Grid expansion giving him good self sufficiency, decent damage, and potential to juggle strong enemy hits with redirection from King’s Shield.

Lower Tiers – Holiday Siebold and Calem have been moved a bit up with the addition of their EX upgrade.

Tier 1 – The upper half has been reshuffled, with Red and SS Dawn being moved to the top sub-group leading the Tier with the constant addition of new units that want their support and game modes that highlight their strengths. Spring Burgh and Kiawe now compose the middle sub-group.

Tier 2 – Palentine Dawn now joins the middle sub-group being the best enabler for Anni May’s multipliers on top of supporting other possible partners, like Giovanni & Mewtwo.

Tier 3 – Fall Caitlin has been moved down to leading this Tier.

Lower Tiers – Roxanne has been moved inside Tier 5. Ramos has been moved up to a high spot on Tier 6 with his Sync Grid expansion, while Wulfric moves from Damage Dealer to the bottom of Utility Tier 6 due to his new Sync Grid repurposing him as a disruptor with Ice Fang mainly.

So, despite the small changes on Utility, this was quite the update for the Hybrid and Damage Dealer lists, huh? We're always looking for more thoughts and constructive feedback to improve our analysis and articles so make sure to drop a comment below if you want to help us refine our ever-evolving Tier List!