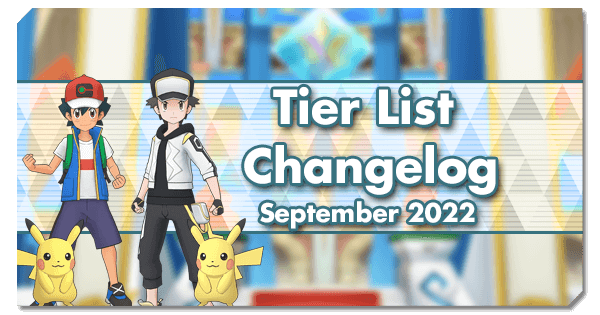 Welcome to the September update for our Tier Lists! For this one, we have what is arguably the biggest update we ever had, with a whopping 20 new Sync Pairs and even more when considering the new Sync Grids, so let’s just check it out already!

General – The upper part has been slightly trimmed down with the new units making the power-creep more noticeable, so some units have gone down despite not being actually worse.

Tier 0 – Ash now leads the Tier alone on his subgroup, with a Master Passive to buff other Sync Pairs on his team, a damage potential that rivals the DPS and Sync Nuke of SS Serena and SS Steven, instant setup, tanking capabilities, and a Buddy Move that can out-damage even the mightiest Tech Sync Nukes. The bottom subgroup has been dropped due to the gap in power with the rest of the Tier, and Lucas has switched his position with SS Lusamine.

Tier 1 – SC Diantha has been moved up a bit with the addition of Fighting Zone.

Tier 2 – The Tier has been slightly reorganized, with Cyrus going above Archie with his greater amount of team comps and versatility and Classic Blue being a strong partner for the new Kanto Master Sync Pairs putting him a bit above.

Tier 3 – Alder got a new good partner in SC Rosa, who can easily enable his Devastation Sync Nuke, drop Sp. Def, and hasten his setup a bit with a crit buff, resulting in a slight bump to his position.

Tier 4 – NY Volkner finally gets access to a more reliable Electric Terrain setter that also enables his paralysis multiplier, resulting in a decent move up to him. The weight given to self sufficiency and reward has also been debated again, resulting in a move up for units like Bea (who also got Fighting Zone) and a move down for characters like Hala.

Tier 5 – SC Guzma received a big move-up as one of the main users of Fighting Zone due to his self-sufficiency and focus on DPS over nuke, with N & Zekrom also benefiting from the addition of SST Red to a lesser extent.

Lower Tiers – Solgaleo greatly moved as one of the characters that benefit the most from SSA Cynthia, who can buff everything it wants and summon Fighting Zone for Focus Blast, and even being the rare mixed Striker that can make use of both Physical Move Up and Special Move Up that Cynthia gives. BP Sophocles has been added to mid-Tier 8 with very strong self-buffs and good DPS, mainly just being held back by lack of an EX Nuke and recoil to a lesser extent. Naomi has been added right behind with less sufficiency, but more damage in comparison and being capable of Sp. Def debuffs. Lodge Sycamore appears at the top of Tier 9 with a decent damage potential, but tricky conditions to max his damage. Korrina and Bruno received a small bump with Fighting Zone as DPS-focused Sync Pairs. Tier 10 now features sub-groups, with Hapu going up thanks to her EX and Sync Grid expansion, while Lodge May, BP Candice, and Lodge Marnie have a lot of shortcomings that makes their use extremely limited, landing at low Tier 10.

Tier 0 – Similarly to Damage Dealer, the last sub-group has been dropped with the increased gap inside the tier against the top units. SST Red lands alone at the top of the Tier as a character with one of the most complete kits in the game, having good DPS, multiple sources of burst damage, a field effect, a Master Passive, tanking capability, among other things. Dojo Gloria has also switched her position with Maxie due to her more broad use while keeping high efficiency.

Tier 1  – The top sub-group has been separated into two, and SC Rosa has been added to the bottom of the Tier, having good utility similar to Dojo Gloria, but disappointing damage output and good, but not perfect self-sufficiency.

Tier 2 – The Masked Royal has been moved down as his debuffs aren’t as useful today as they once were compared to the utility of other units, while Deoxys-Speed moves above Normal with his better use on 3v3s with Sync Acceleration.

Tier 3 – Karen went up with her expanded Sync Grid giving her a Sync Nuke and stronger utility without sacrificing her damage. Spring May and Tech Gyarados have also been moved down as they were deemed as relics of the past relative to where they were ranked and not reflective of where they should be today.

Tier 4 – Lodge N, Lodge Rosa, and Lodge Silver were all added to the yellow subgroup of the Tier as units with varied utility that tend to shine especially on Legendary Gauntlet with their status conditions and debuffs.

Lower Tiers –  Nanu with his expanded grid has been added to Tier 5 with a solid Sync Nuke being available to him and making his flinching aspect more self-sufficient thanks to Critical Focus. Tier 7 now also features sub-groups.

Tier 0 – SSA Cynthia has been added to the last sub-group as arguably the best Tank in the entire game and the best Support in defensive terms, although her lack of offensive buffs outside of crit and slightly unreliable Buddy Move condition stops her from going to the top. SS Brendan and SS Dawn have also switched positions, although they still share the same sub-group.

Tier 3 – This Tier has seen a general re-organization, with SS Elesa going to the top of the Tier as her Sync Acceleration utility continues to show its value with each update and Palentine Dawn going slightly lower as her niche is not really unique anymore and could even be argued as having better options than her. Mesprit has been added to the bottom of the Tier as a Psychic Master unit who can max SpA without MPR, provide gauge support, and support the team defensively with Reflect and Light Screen.

Tier 3 – Deoxys-Defense has been moved down to the middle of this Tier as his uses are generally outclassed by other Supports, and his lack of key contributions to the team like crit, gauge, or EX Support makes him have a hard time being chosen. Lodge Blue has been added to the top sub-group with a similar kit to BP Surge, exchanging a better crit buff for a better gauge support and paralysis for a 60% flinch chance. Nita has been added to the bottom sub-group, instantly buffing Attack and Speed by 4 stages and healing the team with Mini Potion All, which are powerful tools, but remains a kit that’s lacking in other aspects outside of that.

Lower Tiers – Tier 5 saw the addition of Lodge Cynthia, who can max the crit rate for the team and buff Sp. Def - although she does provide Move Gauge Acceleration too, her expensive moves might make her not as gauge friendly as it seems, however. BP Janine has been added high-mid Tier 6 with a decently variety of buffs, although not being the fastest buffing profile, while BP Clemont was added to low-mid Tier 6, who has a kit with a variety of things that may not be very synergistic, but by no means bad. Lodge Lillie has been added to low-mid Tier 7, being mainly focused as a debuffer, but not having much to her kit beyond it.

Phew... that was quite the update, wasn’t it? We hope you'll enjoy and stay tuned for more!