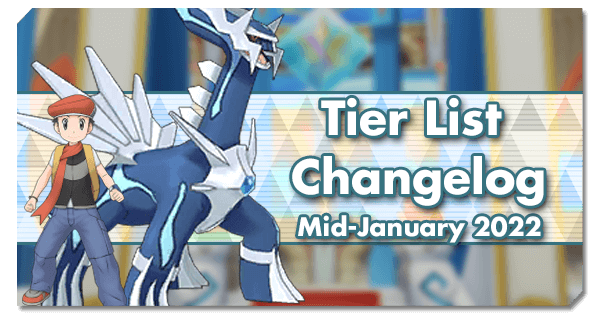 Welcome to the first update of 2022! After the large update at the end of 2021, we’re going to review some placements this time, with a bigger focus on the Ghost and Dragon Type Sync Pairs, after we had some more time to play around with their empowered kits, so this won’t feature as many changes as last time.

Tier 1 – SS Leon has seen a small rise inside his own subgroup after seeing his Dragon Zone power on practice.

Tier 2 – Leon has been dropped from Tier 1 to the top of Tier 2, sharing the same sub-group as Cyrus to better reflect the difference in power level of the pairs. Marnie and Raihan have joined the second sub-group behind Giovanni.

Tier 4 – Brendan, Silver, and Fall Hilbert have all been dropped to the top sub-group of Tier 4, while SS Cynthia went up to the same group. Allister has also risen from Tier 5 to the second sub-group on Tier 4.

Tier 5 – SS Grimsley and Hilda have been moved to the sub-group of the Tier while maintaining their overall position due to the general redistribution of the Tiers. Summer Gloria and Blue have switched positions.

Tier 6 – Burgh, Fantina, and Gladion have been added to a new bottom sub-group on Tier 6 since their power was deemed more fitting of this Tier than the lower one.

Tier 0 – SSR Cynthia has been added to the Tier and now shares a sub-group with Anniversary N, while Bianca is now alone on the last sub-group.

Tier 1 – Classic Elesa has been moved to the middle of Tier 1 with her superb performance on Legendary Arena while keeping a great burst potential for faster paced modes. Palentine Serena has been moved down to below Ghetsis with the slight decline of her main builds who have gotten better partners, like Ghetsis on Freeze spam builds and Sygna Suit Cynthia on Dragon Zone teams.

Tier 2 – Champion Iris got her own sub-group at the top of the Tier, while Sidney has been moved to the bottom of the tier with his powerful nuke that can easily be slotted on almost any team.

Tier 3 – Dawn has been moved up to the middle of the Tier with the added relevance of defensive supports with slower paced modes, while Mallow has been deemed to be too low before, and as such, moved to the bottom of the Tier.

Tier 1 – Red has been moved to the bottom of the Tier to better reflect the power of his kit and the benefits of the new Lucky Skills Head Start 1 and Adrenaline 1.

Tier 2 – Professor Sycamore and Falkner are now separated from Lyra and Hop by a sub-group distinction.

Tier 4 – Sawyer has been moved to below Lillie on her sub-group and NY Sabrina has been added to the same sub-group while keeping her overall position.

This is all for our mid-month update of the Tier List! With no datamine being released, changes were small, but keep an eye on our site as the next update should be available shortly after the pre-2.5 anniversary datamine next time!

We're always looking for more thoughts and constructive feedback to improve our analysis and articles so make sure to drop a comment below if you want to help us refine our ever-evolving Tier List!

Should You Pull? Mallow & Appletun