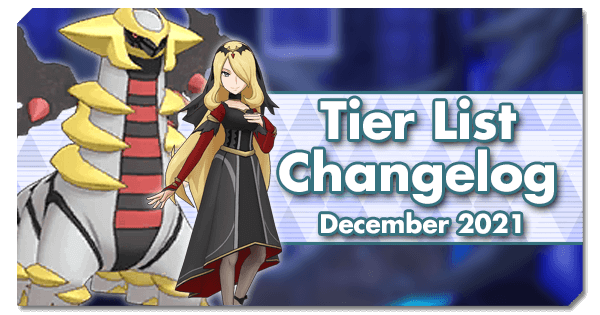 Welcome to the final update of 2021! As you have noticed, it took around 1 month from the last update for us to release this one – this is because of the unexpected early update from DeNA throwing our schedule even after the changes were decided, so this is essentially two updates in one! This time, updates were made to give some weight to Extreme Battles that have been increasingly more common and the upcoming Legendary Gauntlet (although Master Mode is still considered as the main game mode), new Lucky Skills and the new field effects: Dragon Zone and Ghost Zone.

We have decided to change our approach to Tier 0 and allow for sub-groups within it. While the initial intention was to only have the most meta-defining units here, this was ultimately limiting us on what we could do. As such, Tier Ultra was removed, and instead, SS Lusamine got her own sub-group at the top of Tier 0 – she’s effectively at the same place as before however, so this should not be confused with her being a weaker unit than earlier.

Archie, BP Zinnia, Summer Marnie, and Valerie have been moved from Hybrid to Damage Dealer after some reevaluation and feedback from the community and the contributors, while Lucas and NY Volkner were newly added to the list.

Tier 0 – Lucas and Archie have joined Lear and SS Red on the second sub-group, while SS Lusamine keeps the top sub-group for herself. Lucas earns this spot due to summoning a powerful field effect, having great self buffs, good DPS, and an incredibly powerful and easy to set up Sync Nuke.

Tier 1 – Anniversary Lillie has moved up to the highest sub-group of the tier due to Ghost Zone and her incredible value on Legendary Arena. Similarly, SS Leon has moved all the way from the bottom of Tier 2 to Tier 1 due to Dragon Zone and his performance on Legendary Gauntlet (while still being a great burst option on Master Mode). SS Erika has also moved to the upper sub-group while Classic Blue and Emmet swapped position due to Dire Hit All + flexibility in terms of team composition.

Tier 2 – There has been a general redistribution to reflect the new game modes, and NY Volkner has been added to the bottom of this tier due to his good DPS, Sync Nuke and capable self -buffs, but not higher due to having to choose between excelling in either form of damage, being a bit slow on the setup aspect, and having incompatibility with the main Electric Terrain user in Volkner and Luxray.

Tier 3 – Summer Marnie joins the middle of the tier from the Hybrid list, while Zinnia and Lance have been moved up due to their increased Dragon power – with Lance not moving higher due to his lack of self buffs making it very hard to actually cap his damage output.

Tier 4 – We had an expansion for it with the bottom units of Tier 3 and the top units of Tier 5 being added to it, alongside SS Cynthia moving two whole tiers to join the other pairs here, benefitting from both the Dragon Zone and the Head Start Lucky Skill making her more effective at accelerating the Sync countdown.

Tier 5 – Blue and Summer Steven dropped slightly due to not keeping up with the Sync Nukers from the tier and restricting EX Support usage, while Allister moved up a bit with Ghost Zone.

Tier 6 – Zinnia & Salamence has been added from the Hybrid list to the top sub-group, and Solgaleo and Gloria have also joined it due to both being units that tend to prefer the Legendary Arena battles.

Lower Tiers – We saw some Ghost and Dragon units generally moving up with Zones but not enough to put them on the higher tiers. Gardenia moved up to Tier 7 with the expansion of her Sync Grid, and the addition of a new tier to allow a more even distribution of the Sync Pairs, alongside the addition of Valerie from the Hybrid list to the bottom tier.

Mina has been moved from the Utility list to the Hybrid category, and SS Renegade Cynthia has been newly added.

Tier 0 – Anniversary N and Bianca have been moved from Tier 1 to a new sub-group on Tier 0. As such, there were no units on Tier 1, and consequently, most units below have been moved up one tier indirectly by name, although this doesn’t mean the units actually became better.

Tier 1 – SSR Cynthia has been added to the top sub-group alone due to her decent DPS, great Trainer Move, very strong Sync Nuke, and solid utility in Ghost Wish and defense drops. Ghetsis has been moved up to the lower sub-group on Tier 1 due to his general usefulness on Legendary Arenas, with a strong Sync move, decent DPS, freeze chance, and being capable of dropping the offenses and Speed from the opponent.

Tier 2 – Classic Elesa and Champion Iris have also moved up due to their potent debuffing kit shining in longer battles compared to the fast pace of Master Mode (although they still retain great burst potential in that mode), while Holiday Nessa has been moved to the bottom of this tier rather than the top of Tier 3 to better reflect her power.

Tier 4 – Mallow has moved up due to being generally agreed upon that she was too low before, and Fall Acerola got a small raise with her good synergy with the new SSR Cynthia.

Lower Tiers – Agatha and SS Misty have been moved up due to working better than the other units on Legendary Arena, with Agatha also benefits from SSR Cynthia, and Mina has been added from the Utility list to the top of Tier 6.

Tier 0 – There has been a small reordering of the pairs, but the components and sub-groups of it haven’t been changed as all those 3 Sync Pairs are really dominating this category.

Tier 1 – Kiawe has been moved to the top sub-group with his performance in Extreme Battles and versatility letting him be a strong support for multiple new units and teams, like those featuring the recently released SSR Cynthia and SS Lusamine.

Tier 2 – Fakner has dropped from Tier 1 due to his lack of gauge support and generally not being as effective as those on Tier 1 overall, while Red has moved to the top of the tier on his own sub-group due to small details adding up in his favor, like Head Start Lucky Skill and the increasingly common Extreme Battles. Elio has also moved to this tier from the bottom of Tier 3 due to his impressive performance on Extreme Battles and Legendary Arenas alongside being agreed upon to being under-ranked before.

Tier 3 – Supports with some defensive power have generally been moved while hyper offensive ones moved a bit down, including the bottom sub-group from Tier 2, due to their lessened effectiveness on modes that are not as hyper offensive as Master Mode. SS Elesa has also moved up due to Head Start greatly increasing how effective her sync acceleration is.

Tier 4 – There was again a general redistribution favoring defensive supports and a drop to fully hyper offensive ones. NY Sabrina has been added to the middle of this tier due to her effective and fast AoE buff to Special Attack and being the only support capable of giving Special Move Up Next to other units, but being held back by needing RNG for most of her buffs that aren’t Special Attack and them being distributed across her kit making it even slower. Cheryl has also been added to the same sub-group with her expanded Sync Grid making her a capable special support that can also buff Speed while providing solid defensive utility with her Trainer Move boosting both defenses and healing, but being greatly held back by an atrocious physical bulk and lacking base Speed holding her back from being a very strong gauge support.

Lower Tiers – Units with defensive buffs and healing capabilities saw a small raise with Gauntlet and Extreme Battles making them useful even off-region, and while Thorton and Brycen got their Sync Grid expanded, their fundamental problems not being fixed led to only a small raise.

This was a big one with two game-changing units and basically playing catch up with the mid-month update, but those are all the main changes for the GamePress’ Tier List for the end of the year!

We're always looking for more thoughts and constructive feedback to improve our analysis and articles so make sure to drop a comment below if you want to help us refine our ever-evolving Tier List!