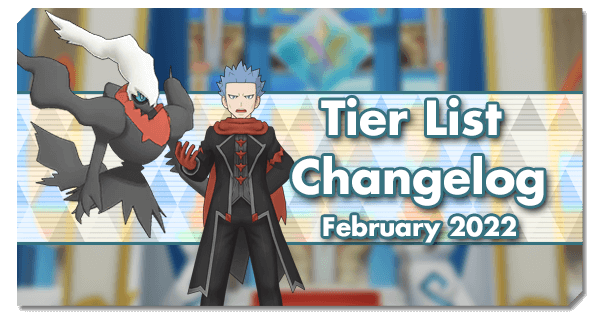 Welcome to the pre-anni update for our Tier Lists! With the datamine around the corner and a shorter month than average, we decided on doing just a single changelog this time rather than the usual two, although our lists themselves did pass by two updates in the meantime. With that being said, let’s go right into it!

Tier 1 – We made a general regroup for the Tier, with SC Diantha now being alone at the top and Classic Blue joining the second sub-group to better reflect their strengths compared to others in the Tier.

Tier 2 – With the addition of Dark Zone and Steel Zone alongside Cyrus’ Sync Grid expansion, the upper half of the Tier has been reshuffled, with Cyrus and Raihan now sitting at the top and Marnie joining their sub-group.

Tier 3 – Holiday Leon now has his own sub-group at the top. Fall Hilbert moved up to the second sub-group of the Tier being the premier Dark Zone Striker/Nuker, while N has been moved down after a disappointing showing on Legendary Gauntlet, where his Piercing Blows passive wasn’t as impactful as expected. Summer Marnie has also moved one sub-group up.

Tier 4 – Lance has moved down to join Diantha at the top of the Tier, while the other units moved to a lower sub-group. Gloria saw a huge jump in her position due to the benefits of the Head Start lucky skill not being fairly accounted to her in comparison to others in the last update, alongside her almost perfect synergy with Palentine Marnie making her a much more capable Striker even without the enemy syncing.

Tier 5 – SC Guzma and Wally have dropped for a better distribution of the Tiers, with Wally joining the sub-group with SS Grimsley and Hilda too. Olivia and Elesa switched places due to the former's better versatility and lack of recoil despite lower peak damage, and Summer Steven has been moved to their sub-group. Blue & Arcanine has been newly added to the bottom of the Tier due to his good albeit pretty slow buffs, very high on-type damage, and although low off-type damage for a 4 gauge move at first, being capable of decently fixing that with Theme Skills, which requires a team built around him.

Tier 6 – Blue & Pidgeot has been dropped to the top of the Tier, and Solgaleo moved up a few spots inside its own group. Fantina has been moved up slightly after continuously being impressive on Ghost Zone teams, and Gladion has moved up with the addition of new field effects making him capable of higher damage caps in more types now, alongside Red’s Super Effective Up Next boost always being available to him.

Tier 0 – The second sub-group has been expanded with the newcomers Palentine Marnie and SS Cyrus, with Marnie providing huge Entry utility to the team with her Attack and Defense drops and Crit buffs that reactivates when she Mega Evolves and a superb single target Sync Nuke, while SS Cyrus provides an even more potent source of AoE sleep than Serena and being capable of getting one of the highest DPS in the game at his full potential, but being held back by a kit that wants to do too much and simply can’t manage everything at the same time.

Tier 1 – The Masked Royal and Classic Elesa now lead the Tier with SS Leaf falling behind them but still on the same sub-group, mainly because of her offensive capabilities simply not being as useful anymore as they once were, leaving her now to her more utility focused builds. Palentine Serena has also been moved to the bottom of the Tier with the increase in competition of what her kit can offer making her role compression not as impressive.

Tier 2 – Kimono Grimsley has been moved to the top of the Tier with the addition of Steel Zone and his general utility even outside of it. Sidney has also switched places with Holiday Nessa.

Tier 3 – Dawn has been moved to the top of the tier, being one of the most capable defensive Supports that doesn’t directly sacrifice offensive presence, while Mallow has switched places with Koga due to her considerably more powerful DPS.

Tier 4 – Brock has been moved up after a good showing on Legendary Gauntlet as a solid tank, healer, and Sync Nuker. Plumeria has also been moved back to Hybrid due to the increased relevancy of her Smog build.

Lower Tiers – SS Misty has been moved up slightly, and Grant has been added to the lower half of Tier 5 with his Sync Grid expansion.

Tier 0 – Ingo has received his own sub-group at the top due to his unmatched power on 3v3s and the ever-increasing need of mixed supports over pure physical or special ones for multiple compositions.

Tier 1 – Red has been moved up with his Sync acceleration getting better and better with the new units and the new game modes all being solid additions to him, while Sabrina now gets hew own sub-group at the bottom of the Tier due to generally not keeping up with the other supports with her setup speed, even if the buffs she provides are still solid. SS Dawn has been added to the middle of the Tier with impressive Sync acceleration capabilities, absurd tanking options with Endurance, Damage Guards, heals, and defensive buffs, and decent offensive buffs with AoE crit and potentially +1 SpA per TM, only being held back due to a lot of things being locked behind her Sync Grid at different extremes, so she has to choose what she’ll bring to each battle.

Tier 2 – Elio has been moved up slightly and Palentine Bea has been newly added to the Tier, with ok gauge due to a 1 bar spam despite no Speed buffs, a fast buffing TM, and heals, but being a bit limited on non-Hail teams compared to other similar Supports, like Elio. Palentine Dawn and Fall Caitlin have also been deemed fitting more the bottom of this Tier rather than the top of the Tier below.

Tier 3 – Phoebe has been added to the lowest sub-group of the Tier rather than the middle one due to generally being a bit more limited than those above her in terms of gauge support and versatility outside of her Hoenn Theme Skill.

Tier 4 – General redistribution of the upper ranks with Piers and Cheryl moving up one sub-group and being re-ordered.

Lower Tiers – General redistribution to better reflect the utility of lesser used supports on the current modes, with Torchic and Roxanne being moved down and BP Morty moving up. Holiday Rosa has also been dropped from Tier 4 to the top of Tier 5. Viola and Clemont have been dropped to high Tier 6, below Rosa. Tiers 7 and 8 have been redistributed after the experience gained using weaker Supports compared to each other with the Legendary Gauntlet event.

And that’s it for now! With the new update being very close, a new update might not be very far off, but we wanted to be as up-to-date as possible before the big 2.5 Year Anniversary month came out, so we hope you guys stay tuned, and comment down any changes you think should be made or if you are confused about some placement. We're always looking for more thoughts and constructive feedback to improve our analysis and articles so make sure to drop a comment below if you want to help us refine our ever-evolving Tier List!