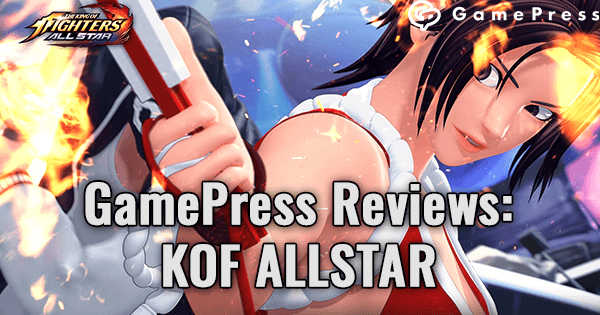 Here are a few gameplay pros and cons that I noticed for those unfamiliar with KOF ALLSTAR’s Japanese version:

The real-time combat is very fun and engaging, and it’s very easy to learn the moves of each fighter in combat, even without looking at their move details because they’re largely defined by movement on the map.

No Dodge or Block Cooldowns

No cooldowns on the non-offensive moves make maneuvering around the map super easy. It’s very satisfying using the dodge mechanic to move around the enemies in order to set up a chain-combo-multi-target attack on before dodge-rolling away to reset and prepare a new combo.

This feels like a real King of Fighters game and not one that was compressed for mobile gameplay. Sure, it’s missing the traditional arcade-style of combos (left right left right up down B A start!), but the basic attack can be chained with itself for combos, blocking and dodging can be utilized for tactical combat without any cooldown costs, and special attacks can be combo-chained together to deal devastating amounts of damage.

Of course, that’s not to say you get everything a fighter has to offer as soon as you pull them--this wouldn’t be much of a mobile game if that were the case. Fighters need to be leveled up to unlock all their moves. In addition, striker assists, team building, and equipable fighter special cards indicate significant character and team customization and optimization that can turn the tides of any level. 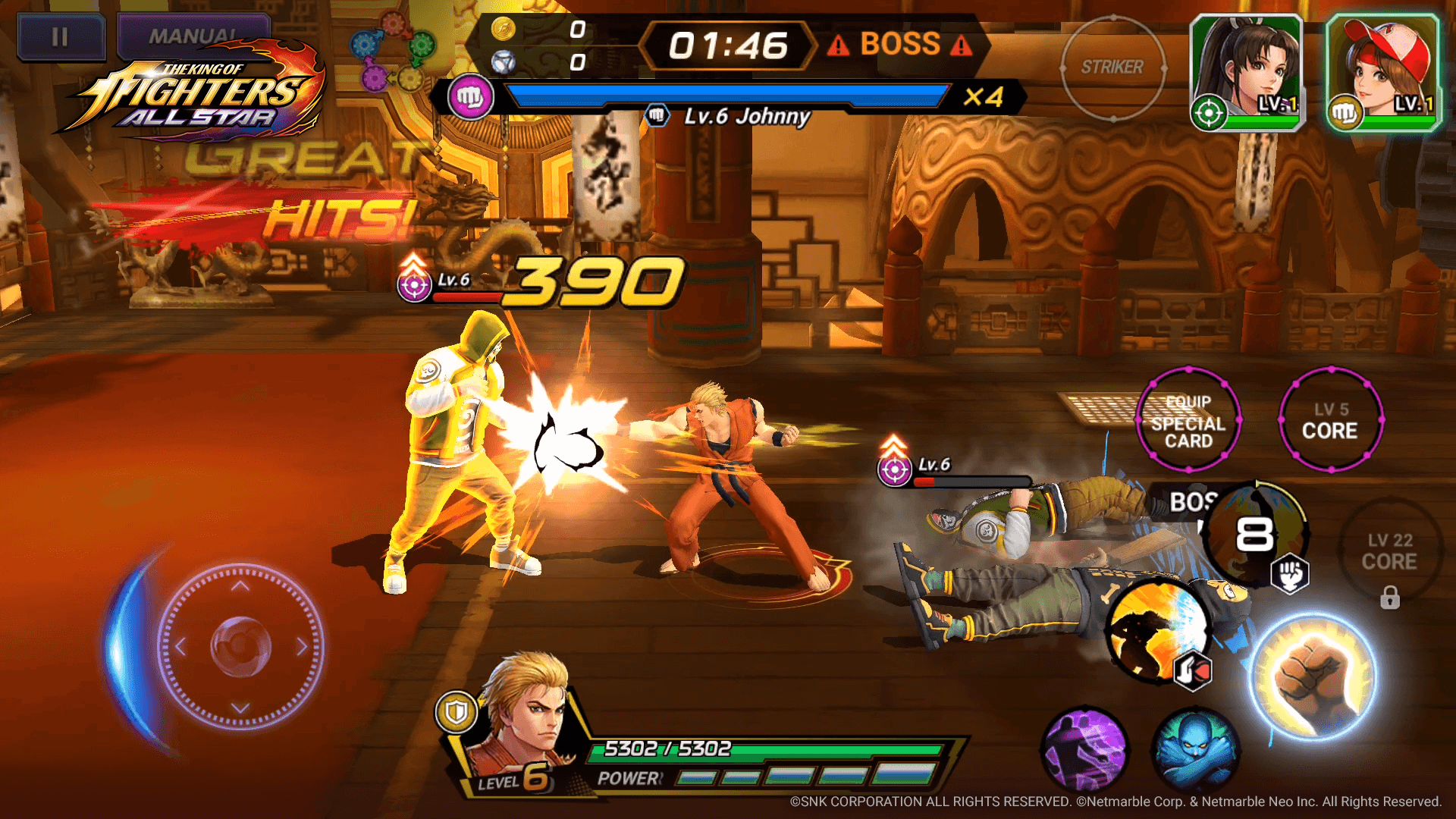 Dodging up and down can be pretty tricky since there’s less space for your thumbs compared to dodging left or right. An unsuccessful dodge can be deadly in boss fights where attacks have massive effect ranges and bosses tend to throw moves at you in groups.

Your fighter will sometimes auto-target the next enemy after a defeat, but if no one was just defeated. This increases the risk of wasting an ultimate move because you aren’t facing the right way or the enemy hitbox is just out of range for your type of attack.

EDIT: You can actually toggle auto-targeting in settings. I recommend keeping it on to avoid dealing with the aforementioned inconsistencies.

Speaking of hitboxes, they can sometimes be difficult to gauge--yours and the enemy’s. There were plenty of times where I was sure I’d escaped the range of an attack only to collapse from the damage. On the other hand, some fighter attacks will also send you flying over the enemy without actually dealing any damage since enemy attack effect ranges are displayed on the map, but your attack effect ranges are not.

Enemies can be dealt more combo damage if they are still reeling back from your last attack, but they gain immunity once they actually hit the ground, meaning have to wait until they get back up in order to deal more damage. This can be hard to keep track of with several enemies attacking you all at once.

It can also be a little hard to tell what each move does--even with the strike and swipe icons attached to each move. These Icons are not always accurate since two moves with the same icon will often have different attack patterns.

You can pull from several types of summons:

Battle card summons are generally cheaper and occasionally, fighter summons will have deals where the 10 pull is 10% cheaper than usual.

The music and animations change based on how well you pulled.

Despite the cons mentioned above, this looks like a really fun game! Real-time PVP combat has always been my favorite feature in mobile games and I’m happy to see it here.

It doesn’t appear to have a million different types of gacha currency either, which is always nice.

The combat is really fluid and the potential for fighter upgrading looks fleshed out but straightforward at the same time. This is definitely a game to look out for. 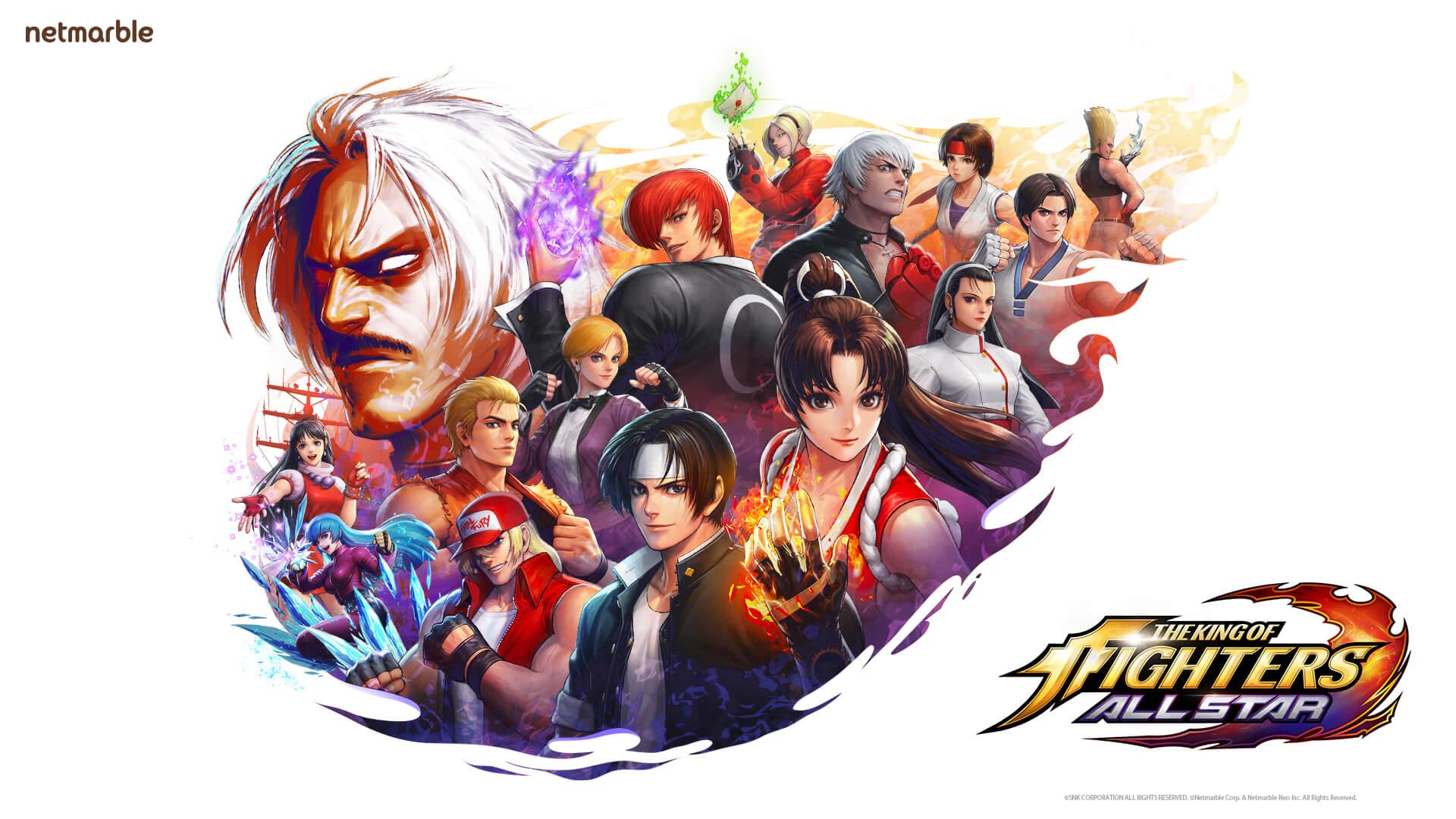