GamePress spoke with John Colgrave, Associate Producer of Old School RuneScape Mobile. With some excellent questions from the /r/2007scape subreddit in hand, let's check in with JaGeX of the latest on the first RuneScape game making its way to mobile. 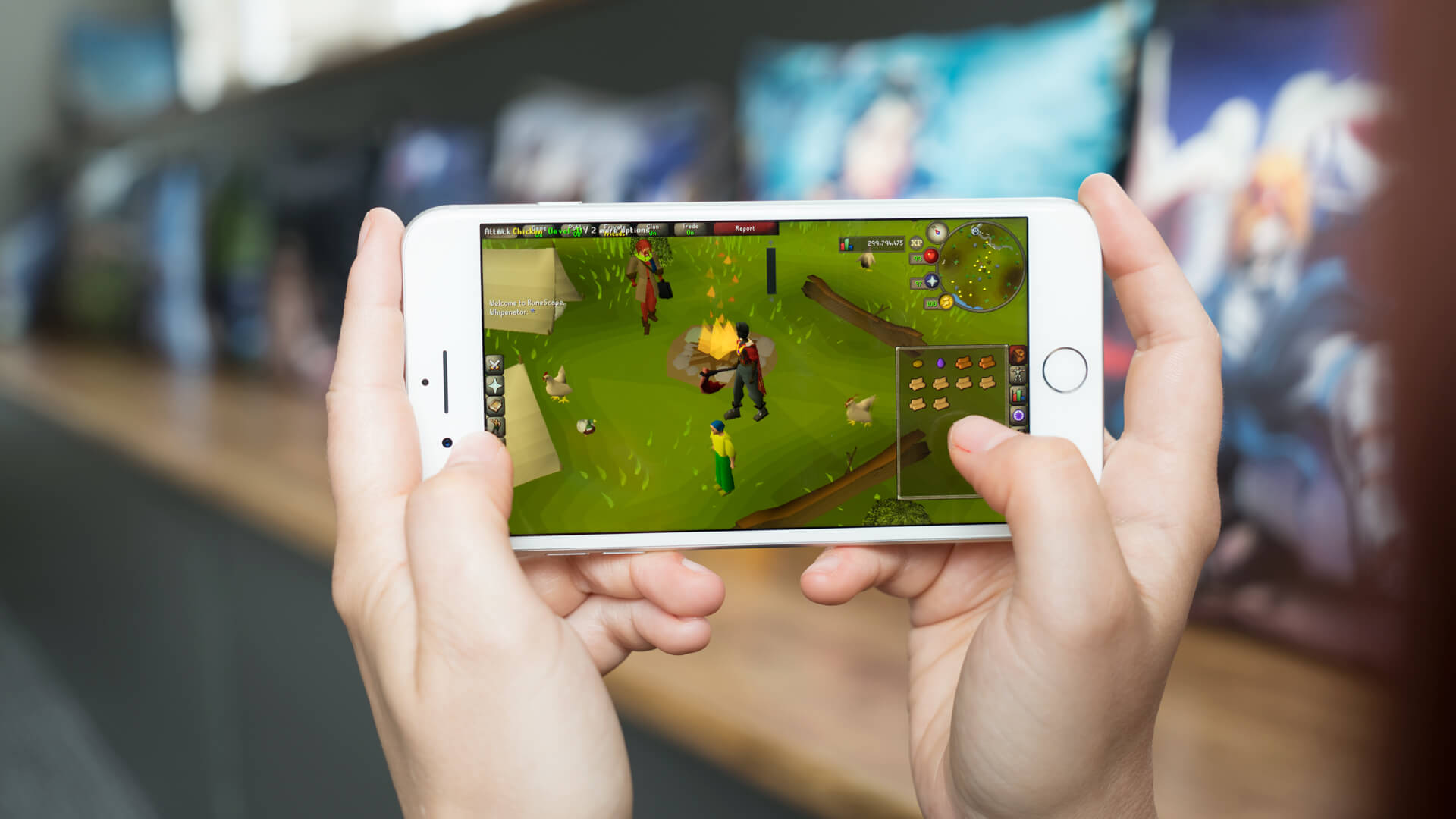 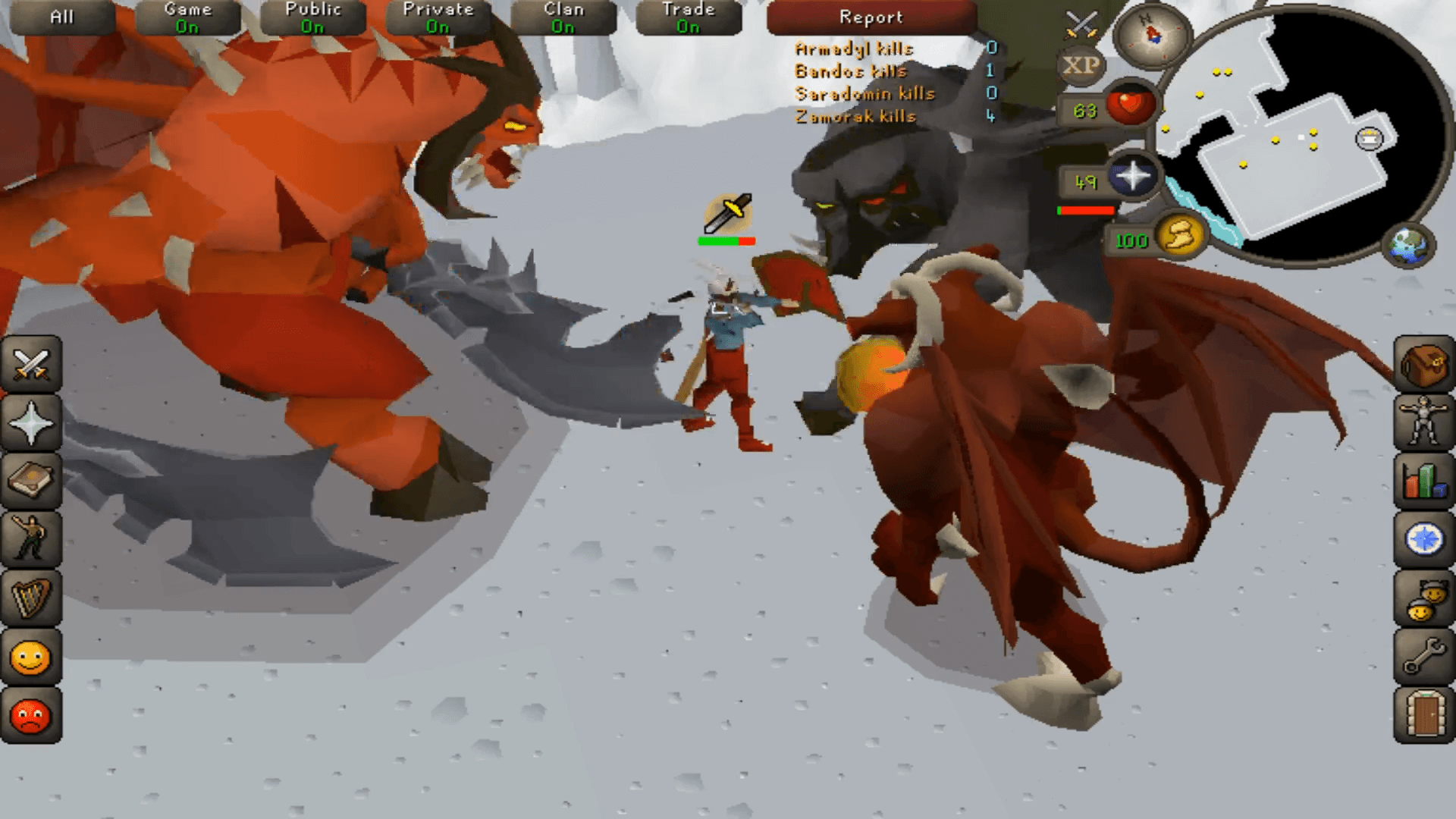 GamePress: I'm sure there are many active RuneScape players among the GamePress community, but for those that lapsed from RuneScape or somehow never tried it before, can you give a short background about the game, its appeal, and your role in its development?

JaGeX: Sure, absolutely! So RuneScape is now nearly 17 years old, while the game I work on – Old School RuneScape – will be celebrating its fifth birthday next February. Old School started as a snapshot of RuneScape as it was in August 2007, but since then it’s very much become its own game. Both RuneScape MMORPGs have separate development teams, both have their own exclusive content, and both have their own loyal communities.

As for me, I’ve been with the Old School team for almost four years now, having joined the original team of just three back in January 2014 as a QA Analyst. Since then I’ve been blessed with the opportunity to lead the OldSchool development team of fifteen where we have a simple purpose: serve our community with great content to enjoy.

GamePress: Why after almost two decades on PC, is RuneScape finally make the jump to mobile?

JaGeX: We’re obsessed with our players at Jagex and it’s because of them that we’re extending both RuneScape & OldSchool to mobile. As the franchise turns seventeen next year we recognize that our players have grown up with us; with many of them now in full time employment with families and responsibilities it can be difficult to find the time to spend hours at a computer playing the game. So we thought, ‘What if the game was in your pocket?’ Your morning commute, lunch break or even a visit to the bathroom can all become a RuneScape session! With smartphones and tablets becoming more and more powerful we’re now in a position where we can truly bring the full RuneScape experience – whether that’s RuneScape or Old School RuneScape – to mobile devices!

In addition, we, of course, recognise that mobile gaming continues to rapidly grow as a sector, and is expected to do so for years to come and extending the products to the mobile platform is a great opportunity to grow the communities that enjoy both RuneScape & OldSchool.

GamePress: Will the iOS and Android releases be simultaneous?  Will players be able to buy RuneScape membership and such with their iTunes or Play Store gift cards?

JaGeX: We are indeed developing for both the Android & iOS platforms in tandem and players will be able to purchase both membership and Bonds within the app and via the app store.

GamePress: The relaunch of a 2007 version of RuneScape (OSRS) was a tremendous success. Did its significant player growth in the past year help with the decision to release the mobile client for OSRS first? Is it still on schedule for an early 2018 release?

JaGeX: You’re absolutely correct, the launch of Old School RuneScape at the start of 2013 has proven to be a great success for Jagex. We continue to see fantastic interest in the game as it continues its divergent path from RuneScape, such as this year’s launches of Inferno, Fossil Island, and other content updates exclusive to Old School.

That being said, it’s not player growth that determines which version of RuneScape will be first released on mobile. The fact is, Old School is a significantly less complex title compared to its older sibling; that team has far more hurdles to overcome, such as interface design and asset compression. We’ve already had players get hands-on with both titles at our RuneFest fan convention, which took place in London back in September, and the feedback we’ve had was extremely positive.

GamePress: On that note, why not a full reset like the OSRS launch, and let players start RuneScape Mobile with a clean slate?

JaGeX: The answer is actually pretty simple: Neither RuneScape or Old School RuneScape on mobile devices are separate entities from what players can already enjoy. They’re not cut down ‘mobile editions’; these are the live games that over 250 million people have enjoyed and grown up with for many, many years. What we’re releasing will be mobile clients that feature streamlined interfaces for smaller devices, but feature the full and unabridged games with hundreds of narrative-driven quests, dozens of skills to level up, and mature communities to interact with.

It means that people will be able to enjoy playing both Old School and RuneScape on their desktop or laptop PCs, then pick up where they left off on their mobiles devices from the comfort of their sofas, on the train or bus during their commute – cellular connectivity notwithstanding – in bed, on the toilet… 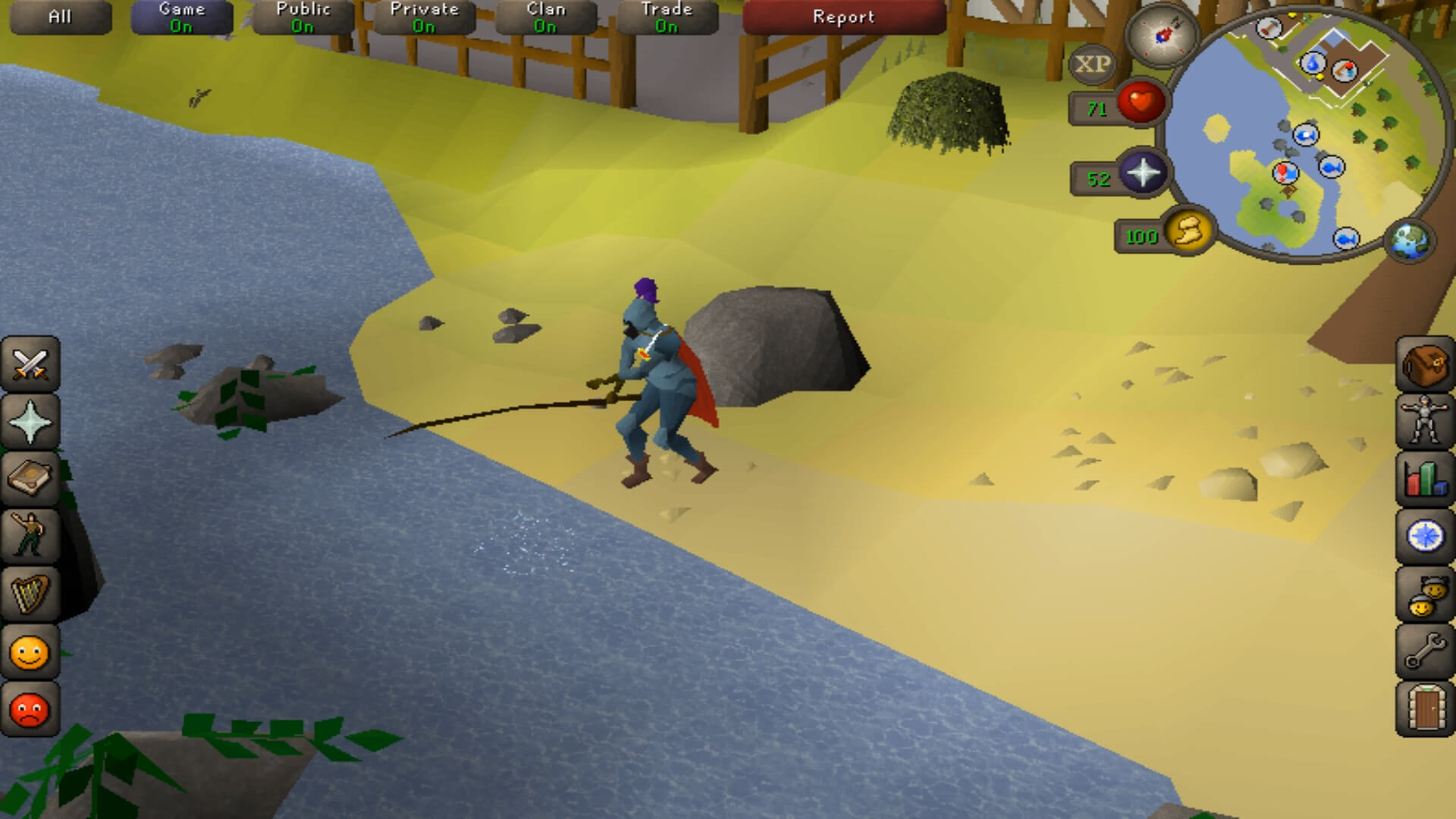 GamePress: RuneScape has been traditionally playable on a wide range of PC hardware.  Will the same carry over to RuneScape Mobile? Should we be shopping for new phones?  (inquired by Kupopallo, Hinkles96)

JaGeX: We certainly want to ensure that, like we have with PCs for the past 17 years, both games will be supported by the widest range of mobile devices possible. We are working hard to optimise the experience so as many players, new, current, or AFK, can enjoy the incredible world we create.

That said, if you’re still using a Nokia 3210 from the early 00s as your mobile device or choice, despite that phone achieving near legendary status (who didn’t love Snake?), you will have to invest in a smartphone or tablet!

GamePress: Porting an MMO client to mobile must come with its share of challenges. How is Jagex dealing with unstable connections, battery life, data limits, and other mobile-specific issues? (inquired by ManIkWeet, Fit_Farmer, sincerio)

JaGeX: That’s a really good question with some great points being raised. The amount of data needed during a session of Old School RuneScape on a mobile device is actually quite small. Again, it forms part of the optimisation, along with battery life, to ensure the mobile experience is the best it can possibly be.

Together with the fact that nobody has ever successfully brought an established MMORPG from PC to mobile devices means that there are enormous challenges our internal teams are facing – and overcoming – every single day.

GamePress: Any progress on making the interface and controls to be more mobile-friendly since the RuneFest demo? WIll we have to manually login every time?  Will Bluetooth accessories like keyboard, mouse, or console controllers be supported, or perhaps necessary for optimal play? (inquired by BeneathSkin)

JaGeX: Indeed! The feedback from the RuneFest demo proved invaluable and we’ve already implemented some new features as a result, but we’re not done! The forthcoming beta is where we’ll really be looking for feedback on the player experience and we expect to be continuously iterating upon the interface design and control mechanisms throughout the beta process.

GamePress: There are so much you can do in RuneScape, and players will inevitably find some activities easier on mobile (or harder).  Is Jagex making any platform-specific balance decisions to compensate that, for current and future contents?  Any chance for mobile-only activities, like a GPS-based penguin hide-and-seeks? What about a mobile-specific leaderboard?  (inquired by ManIkWeet)

JaGeX: Our players are excellent at mastering our game controls and mechanics in the most efficient way to suit their play style and, ultimately, it is the players that determine changes to content, both existing and new. While we don’t currently have plans for mobile-specific content at launch, I fully expect it’s something we’ll begin to see demand for from the community once we’re live.

GamePress: How about an exclusive: When's the beta coming out?

JaGeX: Ha, ha, nice try! We’re really looking forward to announcing that in the not too distant future, so stay tuned. 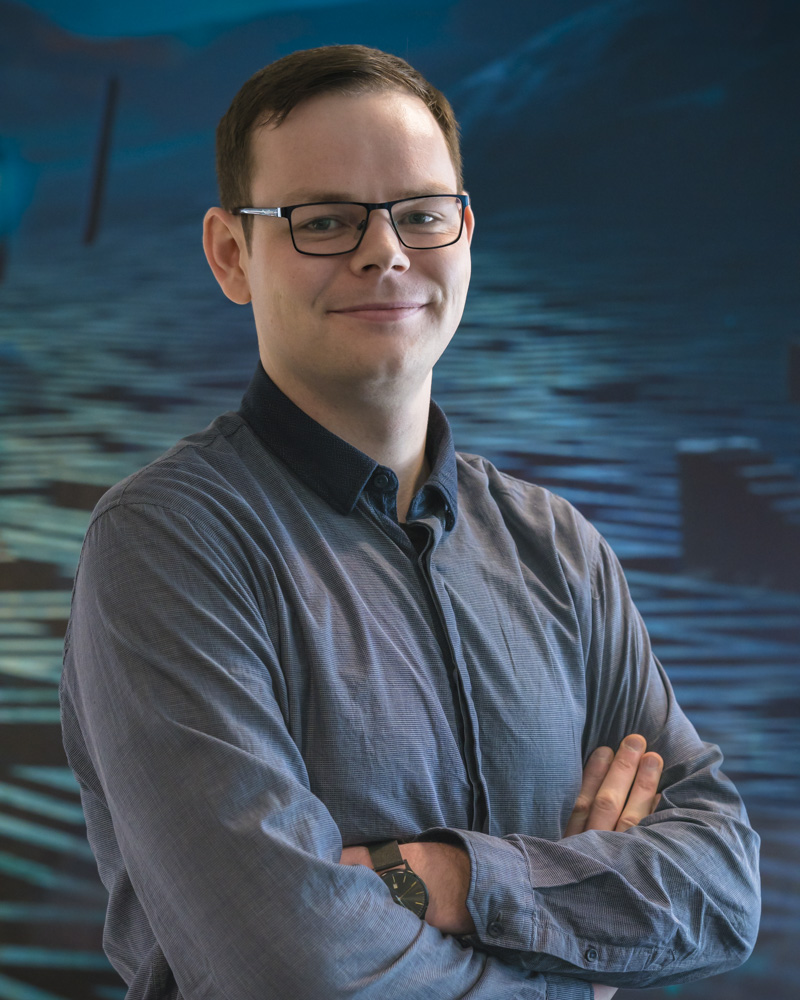