Should you Pull? SAO: Alicization Rising Steel - The Unforgettable Days 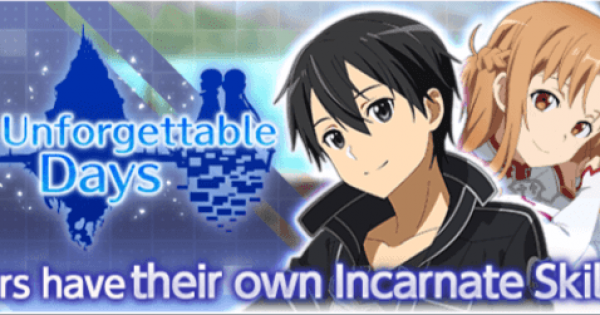 Bring in the New Year Grinning Down Memory Lane

Kirito and Asuna reminisce of days gone by, and gaze lovingly at each other in the new banner The Unforgettable Days. Kirito [Staring Lovingly] and Asuna [Smiling Lovingly] make their appearance as new non-elemental characters. They are the 2nd and 3rd non-element 4* gacha characters (the first-and-only up to now being Asuna [FF]).

Kirito [SL] is a non-element sword proficiency character with a CAE skillset and an AOE physical Incarnate skill.  He has above average ATK and HP, and is average in everything else. Notably, this Kirito is not significantly below average in any given area.

Kirito [SL] fills the role of charger and physical attack buffer.  His kit is strikingly similar to that of Asuna [FF], who fills a similar role for non-element.  The main difference is that his charge is an AoE attack rather than single target. He is not the first to have an AoE charge, as Eldrie [RGK] has one as well, however Kirito [SL] has a (strong) modifier where Eldrie [RGK] has a (medium) modifier.

His Assault skill is a standard (extra strong) physical Single Target attack.  Both his Assault and Charge Skills are physical, taking advantage of his above average ATK, the highest ATK of any non-element character.  Like Asuna [FF], he provides an AoE 20% physical damage up, great for supporting physical damage dealers. Keep in mind, though, that these buffs will not stack (nor with 3* Klein), reducing the benefit of having both in the same party.

His AoE Incarnate Skill is the second strongest physical AoE Incarnate in the game (second to Queen Alice).  As a non-element, Kirito [SL] has the advantage of faring well against non-element enemies, and not being weak to any particular element.  This makes him a little more flexible as a support for use in any element team.

To be added when we know what they are.

Kirito [SL] has average speed and a decent AoE attack.  His SPD is notably lower than Alice [CM] and some 3* AoE characters, but it is higher than Alice[OK].  His AoE might make him worth considering for some players, though most will likely have better options.

Kirito [SL]s greatest weakness is also a strength: his average-ness.  He isn’t weak in any specific area, but he doesn't particularly stand out in any area, either, making him less desirable outside of non-element enemies.  Also, from the standpoint of pure physical support, he falls a bit behind Asuna[FF] since she additionally has a physical Defense down debuff built into her Assault Skill. 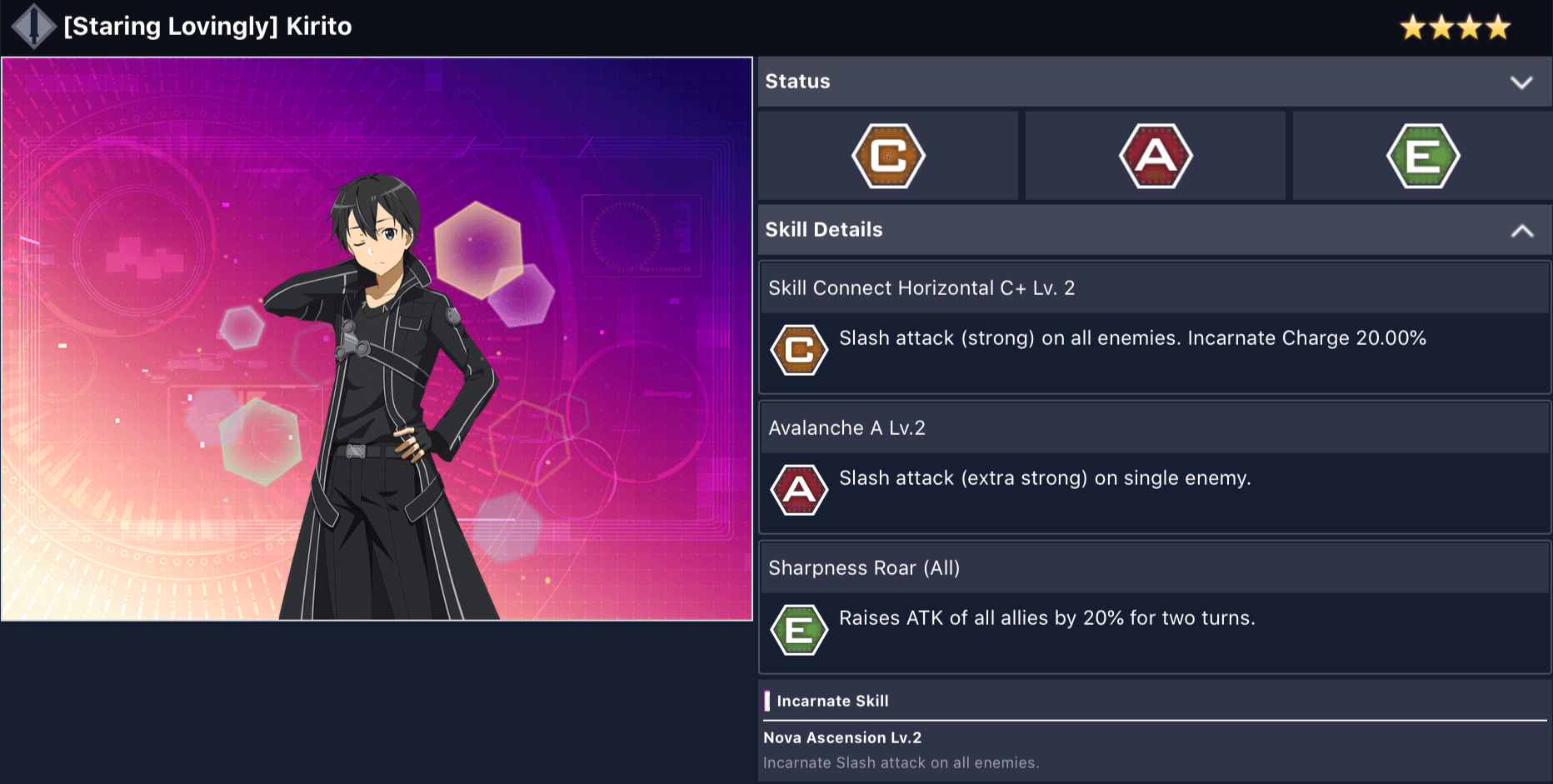 Asuna [SL] is a non-element rapier proficiency character with an HAE skillset and a ST physical Incarnate Skill.  She has the highest MDEF of any character, usurping the spot formerly held by Tiese[FD]. She also has above average MATK, DEF, and SPD, and below average ATK and MP.

Asuna[SL] fills the healer/buffer role, especially effective for non-element teams.  Her Heal skill is an AoE (weak, probably medium at LB1) heal that also raises the physical defense of non-elemental party members by 15%.  With her above average MATK and with AoE healing being quite effective in the current meta, she should often be able to handle the main healing role for most content, but will be especially strong for non-element teams against physical damage dealing enemies.  Because non-element lacks elemental weakness, she may find use as a healer on some off-element teams.

Her Assault skill is a straightforward (strong) single target physical attack, and her Enhance skill is a 2.25 charge boost, the same E skill currently in the kit of Leafa [MMS].

To be added when we know what they are.

Asuna [SL] has fairly high speed, lagging behind only Eydis [KotA],  Yuuki [EiS], and Leafa [MMS]. She has the same speed as Ronie [BJ] and Asuna [FF].  Unfortunately, she has no AoE attack and a low ATK for her ST assault. Healing is not particularly necessary or beneficial for most matches either.  This being said, speed is king in PvP, and often a high ATK is not necessary to finish off an enemy. Also, the heal could prove useful if up against an Eydis [KotA] or Alice [CM] to counter their AoE damage so your slower attackers can survive an initially faster setup  Therefore, though not necessarily one of the strongest PvP choices, she is definitely worth considering and may find a place on some Ordinal teams.

Asuna[SL] has several weaknesses.  The most obvious one is that her Heal only buffs non-elemental allies, making her far less effective off-element.  Another weakness is that her Skills are split between magic and physical. Thus, her physical Assault skill not only suffers from her below average ATK stat, but also from a lower modifier (strong instead of extra strong).  Also, though her E skill gains the player flexibility in group composition, it effectively acts as a slightly faster charge attack without damage, making its benefits situational.

Asuna [SL] is an AoE healer that will especially shine in a party of non-element allies against physical damage dealing enemies, and will be a decent option in PvP.  Outside of that, however, players that already have one of the other AOE healers (Ronie [BJ], Leafa[MMS], Asuna[UaWS], or Eydis [KotA]), will find she is outclassed in most situations. 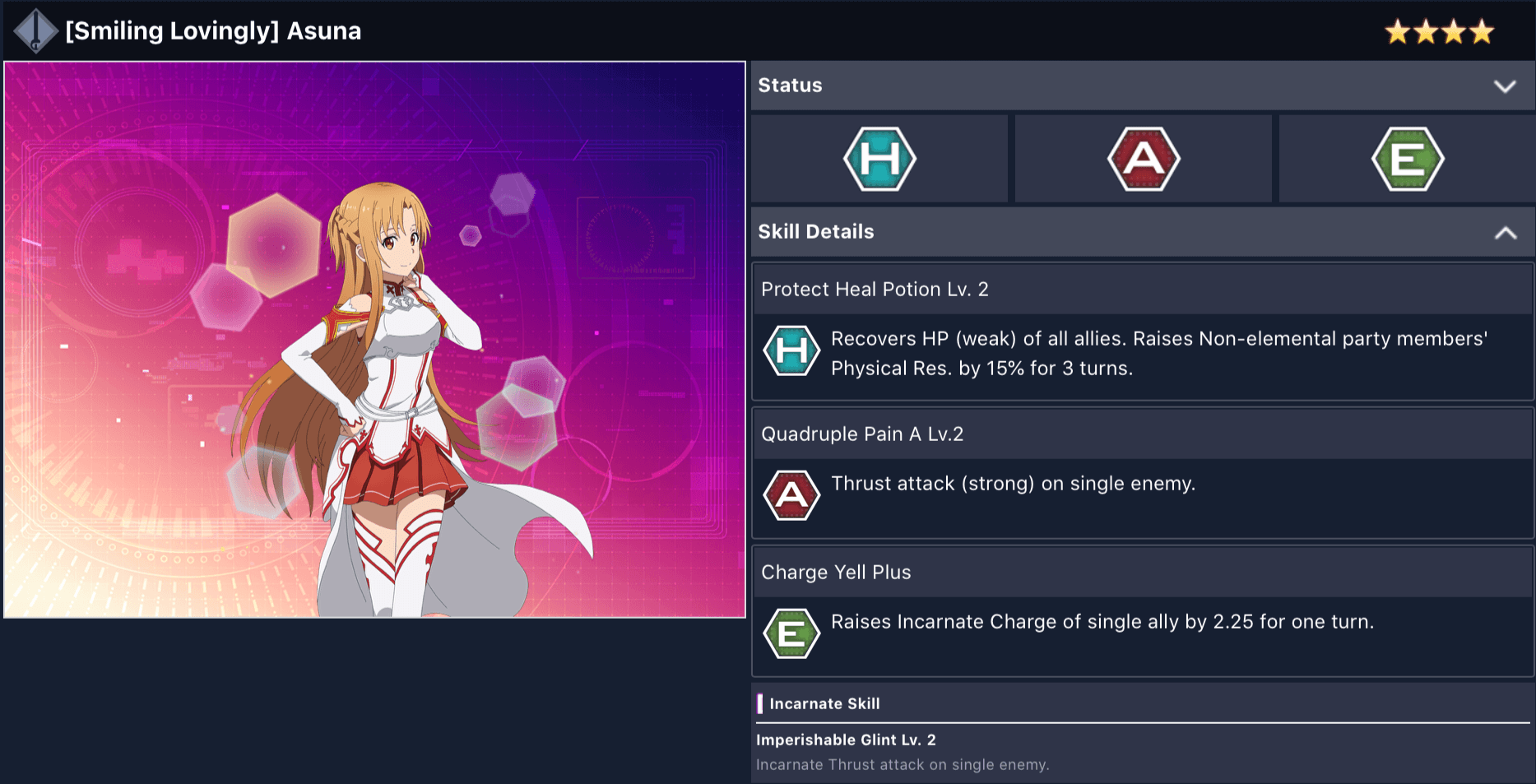 Cons (Reasons Not To Pull)