Should You Pull? Forbidden Grimoire 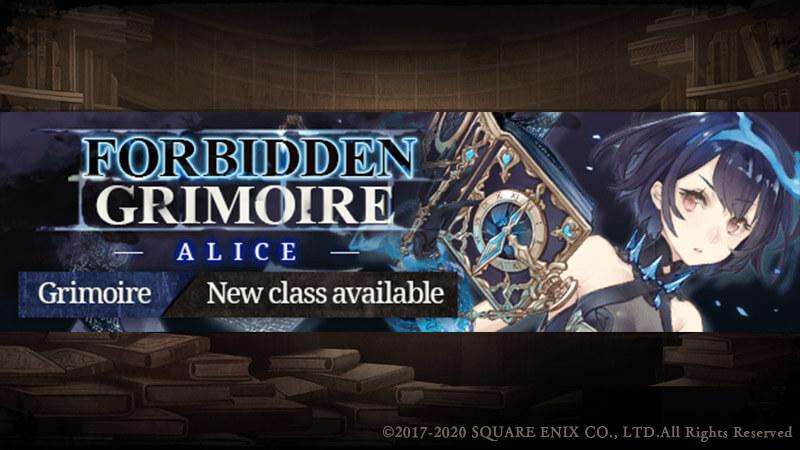 This banner features the brand new Class Alice/Sorcerer, alongside the Nightmare “Noin, Law of Sandstorms” and the Blackstone Staff.
Sadly, while Sorcerer mains might emit cries of joy at a new Tome being released, they should note the Tome in question is the weakest of the featured items.

Also something to keep in mind is this banner runs alongside the Nier: Automata collab banners, so allocating resources to one or the other will be hard to people who’s F2P or on a tight budget.

Alice/Sorcerer: The highlight of the gacha banner, this Alice Class features the standard Common stat spread for all Support Classes: +100 to each stat and an extra +400 HP with her Level 12 Arcana uncap, so no matter your role Alice/Sorcerer is a welcome pull as it boosts your overall stats. Her Class weapon, Tome of Bondage is 17 cost and has a pretty decent Active skill that reduces enemy physical defense greatly for up to 2 targets. However, it suffers both from said skill only debuffing physical defense (which makes this Tome less effective when your Vanguard is composed of primarily magical damage dealers) and the Colosseum Passive skill being a humble Tier I SP cost reduction which doesn’t directly increase your performance like a Support Boon passive skill would. This doesn’t mean the weapon itself is absolutely bad though: Tome of Bondage is a clear upgrade from other early release Tomes but it isn’t a must have due to its specific Active skill and lackluster Passive.

Noin, Law of Sandstorms: Noin might be the best thing in this banner. Her Call effect inside Story stages is a straight Fire damage increase against Wind enemies, making her really effective on Wind-element stages. While Support weapons outside of Orbs can’t benefit from the effect as they would with Ugallu, being a different skill that also boosts Fire damage dealt makes it so players can summon both Ugallu and Noin against a Wind boss, which can speed up clear times by a lot making farming hard content easier. Inside Colosseum however, Noin’s effect becomes a reduction on enemies’ activation rate for Colosseum Passive skills. This can have a huge impact on the outcome of a fight, especially if you time Noin’s effect window with a Nightmare the enemy Guild is calling to get a performance boost, such as the Elemental Three.

Blackstone Staff: This 17 cost Staff features a Tier III heal that will always heal 2 targets, making it really popular with most Clerics as multi-target healing is useful in all content. The Active skill is so good it almost compensates for the Staff’s biggest drawback: its Colosseum Passive skill Barrier Break is pretty much useless to a Cleric since it relies on attacking and support usually do not attack in a Colosseum match.

So, Should you pull?

If you answered some of these affirmatively you might consider doing a few pulls, just keep in mind if you are not an Alice fan the best thing you can get in the banner is the Nightmare, the Staff being close second for Clerics. Also none of these items are limited, they will stay in the permanent pool so consider investing your resources on the Nier: Automata collab and the upcoming Nier: Replicant in August if you want to maximize your gains.