Should You Pull? - NieR Replicant Collaboration 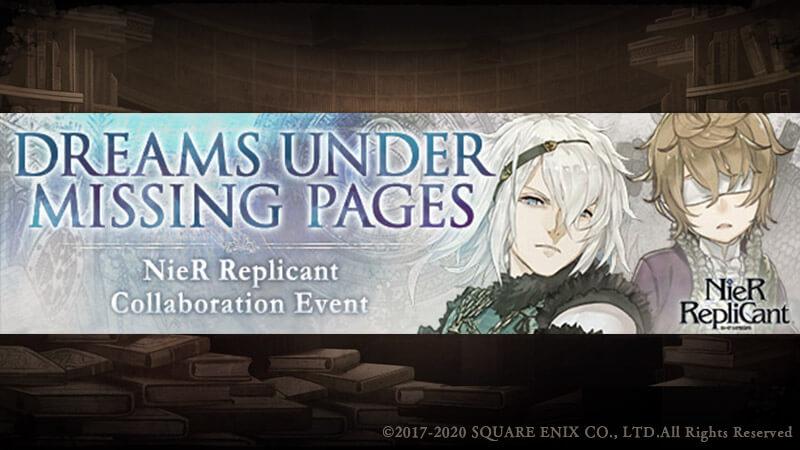 The collaboration event for NieR Replicant is here, and it has brought new Limited Character Classes with it. Players can now obtain Kainé/Breaker, Young Emil/Mage and Devola&Popola/Cleric by pulling their respective weapons in the collab banners. While Polearm Beastcurse is also in the pool, Young Nier/Sorcerer comes in a paid-only package with his Tome.

Part 1 of the collab banners features Kainé and Beastcurse as rate-up items, while Part 2 coming later will feature Young Emil/Mage and Devola&Popola/Cleric. Do note these gacha banners are Step-up type, guaranteeing a featured SR during Step 5.

Because this collab event was originally released when the JP server was a year and a half old, multiple adjustments have been made to the event in Global as to make it balanced for the first-months state of the game: the featured weapons have been nerfed so they don’t severely outclass other weapons currently obtainable.  The event is likewise nerfed to accomodate the general playerbase levels.

Kainé/Breaker: Unlike the standard Breaker stat spread, Kainé grants +100 Physical Attack, +400 Physical Defense and +50 to HP at Level 10, with an extra +300 Physical Attack with her Level 12 Arcana uncap. This spread will be more helpful to Physical damage dealers like Breaker or Crushers while also useful for the Support Classes. Her weapon, Kainé’s Sword is a Wind-element Blade weapon with a Tier IV damage Active skill which makes it pretty good for single target damage, and a Replenish Magic II Colosseum Passive which, while not boosting overall damage done directly, it is a decent passive to help with SP management.

Note: for Global this weapon has been adjusted to 17-cost, with a proper stat reduction of -516 overall stats at Max Level and Limit Break compared to its JP version.

Young Emil/Mage: While the global stats from Kainé focus on the physical side, Emil grants the same number in magical stats: +100 to Magical Attack, +400 to Magical Defense and +50 to HP when raised to level 10, while granting another +300 to Magical Attack with his level 12 Arcana uncap make this character Class very useful for Magical damage dealers like Paladin or Gunner and Supports.

Emil’s weapon, Wind-element Orb Halua’s Head, is pretty unique as it has an Active skill that not only deals magical damage to one target, but also increases the Combo count by 5 each time it takes part in a Combo. Weapons that increase Combo are very valuable in a Colosseum setting. However, due to this weapon being an Orb and having a Support Boon II passive (which benefits the effects of Tomes and Instruments more) it ends up with an awkward niche in Minstrel and Sorcerer grids. Rearguard supports use this to contribute to Combo at the expense of having one less buff/debuff but with a useful Support passive to compensate.

Note: for Global this weapon has been adjusted to 17-cost, with a proper stat reduction of -515 overall stats at Max Level and Limit Break and the skill changed to hit 1 target instead of 1-2, when compared to its JP version.

Devola&Popola/Cleric: A very unique character in the sense that the model sprite can be swapped between both sisters, Devola and Popola grant a total of +100 to both Physical and Magical Attack, +100 to Physical Defense, +200 to Magical Defense and +50 HP at level 10, with an extra +300 to Physical Defense on their first Arcana uncap. This stat spread is very useful to Clerics naturally due to the higher defenses it provides. Their Wind Staff weapon, Devola&Popola’s Staff, has a 2-target heal Active Skill with a Recovery Support II Colosseum Passive.

In Global this Staff has been adjusted to 17-cost with a -514 overall stats reduction at Max Level and Limit Break, while the heal has been changed from Tier II to Tier III with the small Physical Defense buff it provided to healed targets removed. The weapon is still pretty good  despite losing the Defense buff as it is an almost negligible amount and the guaranteed 2-target heal part of the skill together with the Colosseum Passive are its main features.

Note: Devola&Popola’s Staff was originally released in Global with a 2-target Tier I skill which a later in-game announcement deemed as “less effective than intended” and targeted for a buff to Tier III in a later hotfix. This left the weapon with a higher Tier heal than its JP counterpart, but it is most likely to compensate for the removal of the small Physical Defense buff to allies healed by the skill.

Beastcurse: As a Wind-element Polearm with a 1-2 target Tier III Active Skill which includes a small Magical Attack self-buff on use and a Dauntless Courage II Colosseum Passive, this weapon is pretty strong and a welcome addition to any Paladin grid.

Note: for Global this weapon has been adjusted to 17-cost with a -517 overall stat reduction at Max Level and Limit Break compared to its JP version.

Young Nier/Sorcerer: Kid Nier is only available as part of a paid package which includes both the character and his weapon. He grants +160 stats to Physical Attack, Physical and Magical Defense, and +150 to Magical Attack when level 10. Arcana uncap grants an extra +200 to Magical Defense. Overall a good addition for every player but specially for Minstrels and Sorcerers due to the increases in all 4 stats. Grimoire Weiss is a 17-cost Wind-element Tome with a Tier III Magical Attack debuff to 1-2 targets as its Active Skill, and Replenish Magic II as Colosseum Passive.

For Global the Tome was adjusted with a reduction of 1140 overall stats when Max Level and Limit Break, and the Active Skill got the Physical Attack debuff part removed.

While the loss of overall stats is understandable for balance considering in its original state Grimoire Weiss had a slightly higher stat total than similar 18-cost Tomes, the removal of the Physical Attack debuff makes this weapon much less flexible. This, together with a “decent” but non-Support Boon Colosseum Passive, makes the Tome definitely not a must-have but still useful against a Half-Nightmare Alice heavy meta.

All in all, consider getting the package if you like Kid Nier or are looking for a stat boost from the character itself, the Tome is just a nice addition to it if you’re a Sorcerer looking for Magical Attack debuffs.

So, should you pull?

Despite the adjustments made to balance the weapons to the Global game state, all the weapons are still worth the pull, they just are not gamebreaking as people expected them to be. Both Kainé’s Sword and Beastcurse will be useful for DPS players for some time while Devola&Popola’s Staff will be the same for Clerics.