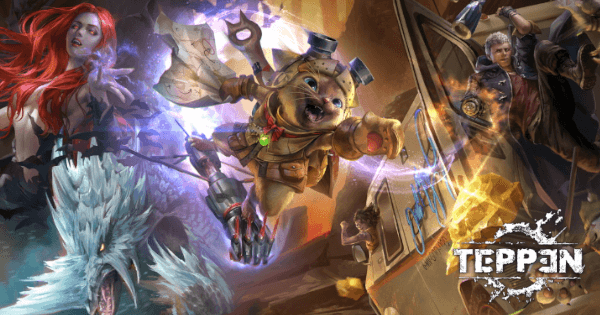 TEPPEN continues to astonish Capcom fans with vibrant artwork. At a glance, teasers of what's to come for the July card expansion honors characters from the Devil May Cry and Monster Hunter. This card expansion shows Nevana and Velkhana as cards to come. The card expansion and a new Hero is expected to launch early July, also marks TEPPEN's 1-year anniversary for when the game released in North America.

Let's take a moment to appreciate the epic teamwork of Felyne riding on top of Nero's arm.

A Furry Friend and New Hero!

Felyne joins as the 13th playable Hero to TEPPEN in July. This furry companion comes from the Monster Hunter franchise, expect cute meows from this shovel wielding creature. Felynes, normally helpers to Hunters, will be joining Rathalos and Nergigante in the TEPPEN roster. Playable TEPPEN Heroes each come with a free deck available to all players, including a card that features that Hero. Never hunt alone again with Felyne coming to TEPPEN.

One of TEPPEN's best features are hundreds of artwork bringing together Capcom franchises. Felyne exists in TEPPEN as a green elemental unit card. The color for Felyne as a playable Hero has not been officially announced.

However, the occurrence of a Hero joining TEPPEN and having been previously featured as a card in TEPPEN has happened with Zero from the Mega Man X franchise. Zero was first featured as a purple elemental card when TEPPEN first released, then recently made their debut as the 12th playable Hero to TEPPEN. It would be somewhat safe to assume that Felyne will join the roster as a green elemental Hero.

The green element symbol resembles a shield. Green in the heat of battle represents fortitude, allies, and protection. Notoriously, green specializes in mechanics that protect their cards, sending large hulking threats, and neutralizing the enemy with the <Seal> ability.

It's really up in the air what Felyne's 3 Hero Arts will do. TEPPEN has already blurred the lines of different mechanics from colors, allowing abilities to be shared between colors. One thing is certain, TEPPEN designs abilities that are thematic and fit the character. Some examples are, Nergigante's Spike Launch, dealing up to 12 damage split across the board and Zero's Tenkuuha giving +2 damage and <Combo> to an ally.

Are you excited to hunt with Felyne? Let us know your thoughts of the announcement in the comments below.