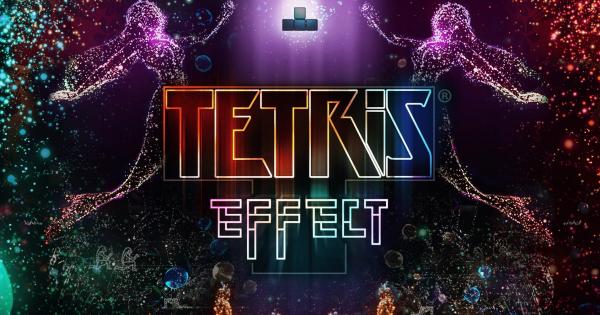 Tetris Effect (2018) is a simple game at first glance. Everybody has played a version of Tetris or can recognize the quintessential shapes (tetrominoes). Tetris has embedded itself into the global culture as one of the most prolific video game series of all time, and TE is the pinnacle of what that gameplay can be. This game should be experienced by everyone, but it was not as popular as the accolades make it out to be. TE is a transcendental, meditative experience that enriches a gaming culture staple to sublimity.

Tetris Effect (TE) is available on PS4 and PC for $39.99 MSRP, which is a steep price tag for such a basic gameplay experience. Why would someone pay that for a game that came out in 1984?

To start, Tetris Effect has all the fancy bells and whistles which were added over the years like hold pieces, T-spinning, and dropping. There is a leaderboard, multiplayer system, and marathon mode when you want to clear those lines all night long. It is a traditional Tetris experience. But only when you think about the gameplay.

The craft behind making TE demonstrates a unique understanding of what makes Tetris popular. The soundtrack is composed by Hydelic, best known for Rez: Infinite, a rail-shooter with a well-known soundtrack, and an emphasis on trippy visuals. Tetsuya Mizuguchi, credited for the original design concept, is also known for Rez: Infinite as well as his work on hits like Space Channel 5, Lumines, and Meteos. Art director Takashi Ishihara is also well known, credited for Resident Evil 3, Dragon's Dogma/DD: DA, and of course Rez: Infinite.

The meticulous design is displayed from the beginning of the game; every menu, stage, and sound effect coalesce into the Tetris Effect Experience™. There are almost two dozen backgrounds with unique songs that change as you play, animations that titillate the senses, and an epic palette-swap effect when " The Zone" meter is used. Stages are meant to be played linearly, as the game “flows” from one stage to the next with pretty seamless transitions. Players can try all stages at once, or they can pick one of three predetermined sets. Each stage can also be turned into a visualizer for a casual Tetris-less sensory journey.

Games that take this much care with their presentation are typically rhythm games like Amplitude, Beat Hazard, or DDR. Except TE is also a rhythm game. The soundtrack responds to your piece drops and the game chimes once a Tetris is cleared (four cleared lines at once). The backdrop and game speed change for certain line clear milestones, which also triggers a shift in the music. Zone energy, earned from line clears, is spent to activate The Zone, a time-slow mechanic that leaves cleared blocks on the screen and is meant to mimic a flow state. This is so the player can stack line clears on top of line clears. If four Tetrises are stacked on top of each other before The Zone ends, it's called a decahexatris (One more and it's an Ultimatris). It's a unique kind of euphoria to see that 10-dollar word pop up on the screen after exiting a simulated flow-state, and it's something that TE has embedded into the whole experience.

Tetris Effect is a leap from what the series is typically known for. The rights to the IP are owned by The Tetris Company, founded by Henk Rogers and original creator Alexey Pajitnov. The rights to the IP were passed around until Nintendo sold it in 1996. After that there were many good/bad/mediocre Tetris games released within a relatively short timeframe (Pajitnov did not receive royalties until the company was formed).

Many of The Tetris Company’s actions after acquisition also revolved around protecting their IP, which shows how important the game is to Pajitnov and Rogers. The company does one thing, and it’s in their name. Tetris Effect came out four years after Tetris Ultimate, which didn't review particularly well. Recently it got popular again for a F2P battle-royale adaptation. When TE released on PS4 + PSVR in 2018 and PC last year, it was hailed by critics as having a "diverse and beautiful presentation" and "a beautiful journey with the perfect puzzle game as your vessel". It has won multiple awards for best soundtrack, visual presentation, and even overall game. But not many people played it. Less than 5,000 people bought it on launch in Japan.

And that is a damn shame. Tetris Effect took over half a decade to make. Mizuguchi wanted to make a Tetris game for a while, but could not acquire the license from EA until 2012. When the game came to PC it did not go on Steam, where Valve takes almost a third of the revenue. It went up on The Epic Store first, timed similarly with other exclusives that were reportedly bought upfront. Tetris Effect is a fantastic game, but it seems that The Tetris Company might not have seen enough return on it. Why?

In Hydelic’s short post-mortem on making the soundtrack, he mentions Mizuguchi and Ishihara had a specific vision in mind for the game:

“When I was first briefed on the project, the concept was very clear: Mizuguchi-san (our producer) and Ishihara-san (our director and art director) expressed the idea of taking you on a journey through your mind, consciousness, and emotions. “This is like zen Tetris,” they said. From there, I set the theme for the sound and music as elements that enhance your immersive experience or soothe, calm, and make you relax. Mizuguchi-san also emphasized “timelessness” — sounds and compositions that are not “on-trend,” but can be appreciated for many years to come.” 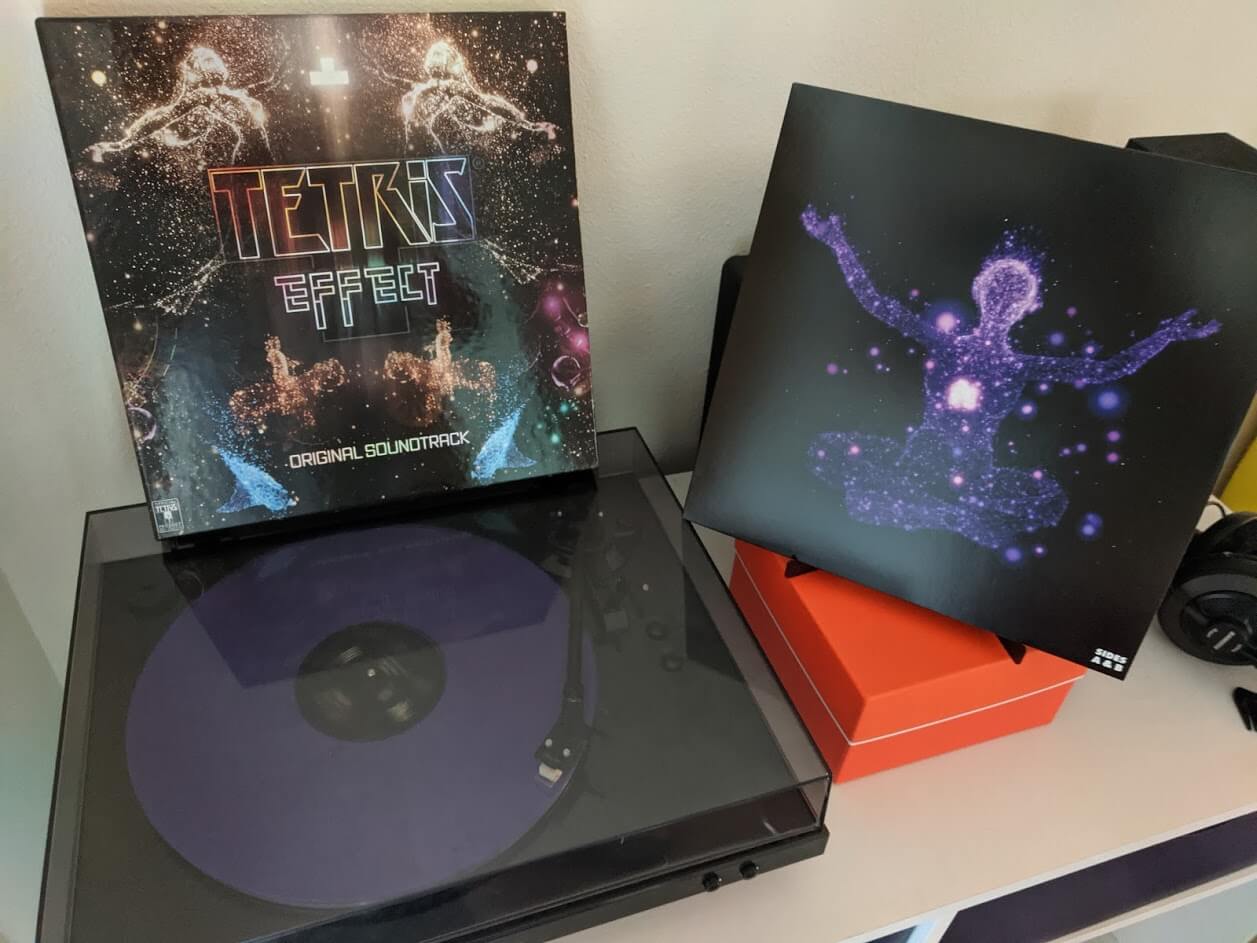 My personal copy of the Tetris Effect Soundtrack Box Set.

Their plan worked and it would not have worked with any other game for one reason. The “Tetris Effect” is the name of a researched scientific phenomenon in which people who play Tetris for long periods of time experience the game when their eyes are closed. Wired wrote an article referencing the induced mind-game in 1994. The effect has been generalized to include other gamification standards under the name “Game Transfer Phenomena.” But Tetris is not only one of the best examples, but also the most accessible thanks to its ubiquity. It transcends culture barriers and keeps gameplay simple. Almost anybody can play and enjoy a game of Tetris. And almost anybody can try and benefit from zen meditation.

The Tetris Effect is a game system that is referenced all over the world. Learning falling block patterns and replicating them in the mind is not only fun, but it also happens automatically. The Tetris Effect can even be seen as why some people get wobbly after returning from ocean voyages. Becoming familiar with experience or game is intrinsically human. So, the “effect” that Tetris Effect wants the player to experience is meant to enhance the inherent humanity found in the game. The experience of Tetris is something most people have, and Mizuguchi, Ishihara, and Hydelic used that to demonstrate mindfulness. Once someone enters the flow-state, a new feeling can be discovered by allowing consciousness to drift into the other areas of the game. The sound and sights lift the game into something beyond the sum of its parts.